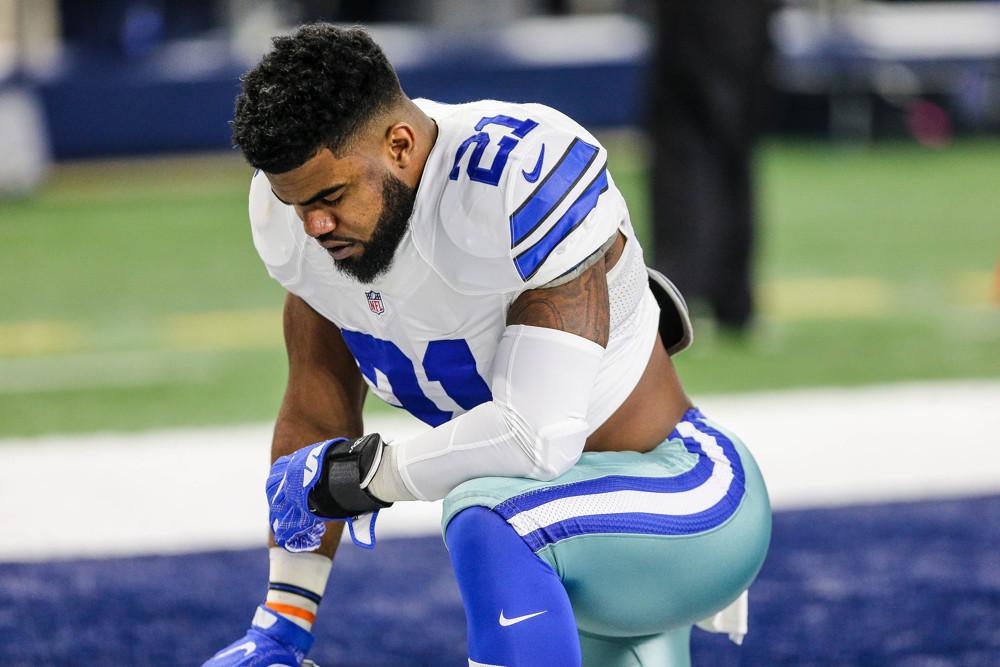 Tony Pollard took some work away from Elliott in 2021 and was the more efficient runner. But he remained well behind the veteran in role, and it sure doesn’t sound like the Cowboys are interested in altering that setup. It’s possible, even, that leaving the knee injury behind shifts some of that work back to Elliott. We’re not betting on a rebound in efficiency for the aging back, but volume is king for fantasy RBs. An injured Elliott ranked 7th in the league in carries last year, 11th in opportunities per game (carries + targets) and 7th in total PPR points. An ADP that puts him toward the bottom of RB2 territory makes Elliott a fine draft value – and perhaps even a strong one if a healthy right knee does give him an efficiency boost.

Cowboys VP Stephen Jones commented on the status of RB Ezekiel Elliott. “I want Zeke on my team,” Jones said. “Obviously, his contract, his money is guaranteed. He’s going to be here [in 2022], no question. We’re fortunate to have him.” Zeke carries a massive $18.2 million cap hit for the upcoming season, but moving on would cost Dallas ~$30 million. 2023 is the first year the guarantees in Elliott’s contract dry up, so it’s quite possible the team cuts him then. It’s worth remembering that the veteran played through a partially torn PCL from Week 4 on in 2021, which surely contributed to his decline in play. Still, it’s clear that the explosive Tony Pollard — who enters a contract year — deserves a bigger share of backfield touches. Zeke averaged 16.7 touches per game; Pollard was at 11.2.

Cowboys RB Ezekiel Elliott said after Sunday’s loss to San Francisco that he played part of the season with a PCL injury. "It was hard," Elliott said. "It's never fun being banged up. But it's my job to make sure I get my body right and be ready for this team, for the fanbase and for the coaches. It's hard, but that's my job. I won't need a procedure. I just partially tore my PCL this year. It was an injury that wasn't going to get worse, but it was just going to take time. I was just doing my job in playing through the injury. I was going out there and doing what I needed to do for my team.” Zeke, 27 in July, will return for his 7th season in Dallas next fall.

Pollard "ready to roll" for Wild Card Round

Cowboys EVP Stephen Jones said Monday that RB Tony Pollard (foot) will be "ready to roll" in Saturday's Wild Card game vs. the 49ers. It's confirmation that Pollard was held out of the regular-season finale as a precaution. Pollard averaged 7.7 carries and 3.7 targets over his final 3 games and is likely looking at a similar workload in the playoffs.

Pollard out for Week 18

Cowboys RB Tony Pollard (foot) has been downgraded to out for Saturday night's game vs. the Eagles. It's unclear if he suffered a setback with that foot or is just getting some rest with Dallas having already won the NFC East. Even with Pollard out, don't expect the Cowboys to overwork RB Ezekiel Elliott on Saturday. Corey Clement will mix in as the #2 RB.

Zeke was out-played by Tony Pollard by just about any metric in 2021. But he's set to count over $18 million against the cap in 2022. We'll see if performance or pay wins out when it comes to playing time. But we'd be looking to get out from under Elliott in dynasty this offseason.