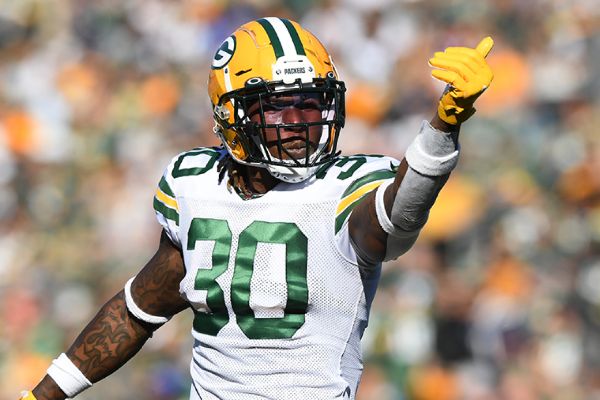 Even if you believe D’Andre Swift to be the superior talent -- and we do -- there’s room for both him and Williams to factor heavily into the 2021 Lions offense. New OC Anthony Lynn has indicated he will have Williams on the field plenty and praised his ability in basically every area of RB play.

Williams’ range of outcomes for this season includes leading Detroit in carries. The sheer possibility of that makes him a solid value at RB40. Beware of further ADP climbing, though, as Williams has already moved up amid the Lynn buzz.

Williams the Lions' lead back?

Lions OC Anthony Lynn suggested in an interview with The Athletic that RB Jamaal Williams will play a bigger role than fantasy drafters are expecting. “Jamaal is what I’d call a classic ‘A’ back,” Lynn said. “I like to break the backs down into A and B. My ‘A’ backs are normally my bigger backs. They can run between the tackles, block probably a little better than a ‘B’ back, they can also run the perimeter. I can leave those guys in there for all three downs. My ‘B’ back comes in, he’s a guy that sometimes I want to use in space more. He’s my speed-in-space guy." D'Andre Swift -- who's going 11 rounds ahead of Williams in ADP -- would be the 'B' back in this scenario. No one should be expecting the 212-pound Swift to be a true workhorse. But he averaged 16 touches over his final 6 games last season and seemed in line to at least see that much work in 2021. It's worth noting that Detroit's new coaching staff inherited Swift but went out and acquired Williams in free agency. This backfield split will be worth monitoring closely this summer. Swift carries some risk at his mid-2nd-round ADP, while Williams looks like a nice value in the 13th.

RB Jamaal Williams has agreed to a 2-year deal with the Lions worth "up to" $7.5 million, according to NFL Network's Tom Pelissero. Williams saw regular usage in both the run and passing game with the Packers, averaging 125 carries and 30.5 receptions across 4 seasons. His contract terms don't suggest he'll threaten D'Andre Swift's expected lead role in the backfield. We'll see about Williams vs. Kerryon Johnson, though, under new HC Dan Campbell and his staff. Williams turns 26 in April.

Williams back for Week 17

Packers RB Jamaal Williams (quad) isn’t listed on the final injury report and will return for Sunday’s game vs. the Bears. We’re curious to see how reps are split between Williams and A.J. Dillon behind Aaron Jones after the rookie’s Week 16 breakout. Neither Williams nor Dillon can be trusted in Week 17 fantasy lineups.

Packers RB Jamaal Williams (quad) missed practice all week and is listed as doubtful for Sunday night's game vs. the Titans. His absence will leave rookie A.J. Dillon as the #2 RB -- but Aaron Jones should dominate backfield work. He set season highs with a 90% snap rate and 20 carries after Williams exited early in last week's game.