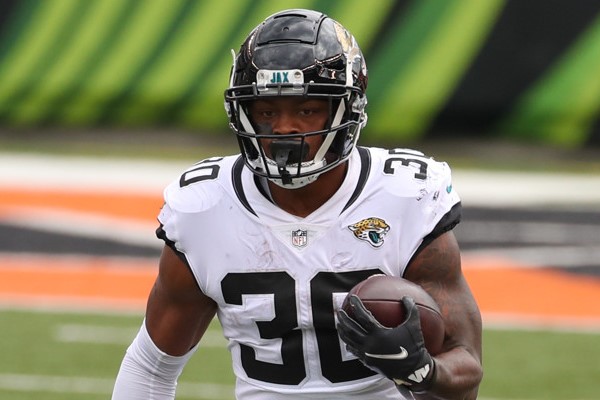 Week 14
Sunday was another ugly performance for Robinson, who gained just 4 yards on his 6 carries. This was the 2nd straight week where he saw single-digit touches. Robinson led the backfield in opportunities with Carlos Hyde seeing 3 to his 6 total.

It's been a roller coaster of a season for Robinson, who saw his ADP vault after the injury to Travis Etienne. His touches have swung wildly after being a dominant option in 2020. Obviously some games were not conducive to sticking with the run game, but the touches have really ping ponged.

Going forward, he is barely a startable piece with the Jaguars in a really bad place.
Week 12
Robinson rushed 17 times for 86 yards in the Jaguars' Week 12 loss to the Falcons, adding 3 catches for 29 yards.
Robinson is by far the Jaguars’ best player in real life and for fantasy as he seems to be the engine to their offense with Trevor Lawrence struggling for most of the year.
Robinson did fumble in the 2nd quarter and lost a few snaps to Carlos Hyde, but he still got his 20 touches for 100+ scrimmage yards.
Robinson is a solid RB2 in just about any matchup as he has shown elite usage and the Jaguars lean on him in any game script.
Week 11
Robinson has clearly been limited by his injury over the past two weeks. Since his he returned from his injury back in Week 10, Robinson has only played on just over 60% of the snaps and has averaged 15 touches per game. Prior to going down in Week 8, Robinson was averaging nearly 20 touches a game on 77% of the snaps. This good news for fantasy managers is James Robinson has found the end zone twice including in Week 11 vs. the 49ers.
Heading into Week 12, Robinson should continue to see his snap count rise as he gets healthier from his Week 8 injury. This should result in much more productive days and maybe even week winning weeks once he is fully healthy. This week Robinson is firmly on the RB2 map as he takes on the Falcons who have allowed the 6th most points to RBs over the past 5 weeks.
Week 10
Robinson returned to his lead role in Sunday’s loss to the Colts, handling 85.7% of Jacksonville RB carries. He took those 12 rushes for a solid 57 yards (4.8 per carry) against a Colts D that Football Outsiders rates #2 in rushing DVOA.

Robinson’s work picked up in the 2nd half, where he got 9 of his 12 carries and 4 of his 5 targets. Robinson didn’t quite return to his normal passing-game usage, getting just 22 passing-down snaps (among 45 Trevor Lawrence dropbacks) to 16 for Carlos Hyde. Robinson had been more than doubling Hyde in that category since Week 4.

We’ll see whether that rebounds in Week 11. It’s not yet reason for concern, especially given that Robinson has out-targeted Hyde 25-6 in shared games that he didn’t leave early.

Robinson and the Jags get the league’s 3rd most favorable RB schedule the rest of the way, according to our adjusted fantasy points allowed.
Week 8
As usual, Robinson was the centerpiece of the offense, but after being the only bright spot the Jaguars had on offense, he left with a foot injury and didn’t return. While on the field, the Seahawks were putting a ton of pressure on Trevor Lawrence, and Robinson was the only player helping them to move the chains. On his 4 carries, he had a 14-yard run and he also added a 17-yard reception, and those ended up being the 2 longest plays the Jaguars had on offense the entire day.

Although he came into this game with just one performance of more than 88 rushing yards, he had scored in 4 straight games to boost his fantasy totals significantly. However, unlike his breakout season in 2020, his receiving usage hasn’t been great, as in his prior 3 games, he caught 5 passes for just 24 yards, and he hasn’t posted a receiving TD this year. If he can return to action quickly from his injury, and as long as he can keep finding the end zone, he’ll be in contention as an RB1, but his volume alone makes him a strong RB2.
Week 5
Robinson had 18 carries for 149 yards and a TD in Week 5 against the Titans.
Robinson has at least 75 yards and 1+ TD in 3 straight games as he is clearly Jacksonville’s best offensive player. He ripped off a 58-yard run on the 2nd drive of the game and later punched it in for a 1-yard TD.
Robinson is a rock-solid RB2 with RB1 upside and has an excellent matchup in Week 6 against the Dolphins.
Week 4
If you stayed patient with Robinson through 2 tough weeks to open the year, he has paid you back the past 2 weeks.

First came a 15-88-1 rushing line with 6-46 receiving in the loss to Arizona. Then came 78 yards and 2 TDs on the ground in the Thursday night loss at Cincinnati.

Since the goofy opener where Robinson carried only 5 times, he has garnered 78.6% of Jacksonville’s RB rushing attempts. That included a season-high 90% against Cincinnati, in a game that saw Carlos Hyde sit for an apparent shoulder injury.

Robinson offered nothing as a receiver -- 1 catch for minus-2 yards among 2 targets -- but even that area provided no real reason to worry. Robinson ran a route on a season-high 82.75% of Trevor Lawrence’s dropbacks.

Robinson looks like a weekly starter for most 2-RB fantasy lineups right now. Matchups with Tennessee, Miami and Seattle the next 3 games only enhance his outlook.
Week 2
After splitting touches down the middle with Carlos Hyde in Week 1, Robinson was given a 73% snap share this week, which led to him seeing 11 rushes and 3 targets. Hyde was given just 4 opportunities to touch the ball. Unfortunately, the Jaguars were unable to move the ball with any consistency after the opening drive, and Robinson was unable to make an impact in the red zone. Although he rushed for over 4 yards per carry, he totaled just 64 combined yards.
As long as he’ll continue to see a significant touch advantage over Hyde, there’s no reason to expect that Robinson will be any worse than a low-end RB2. Of course, with HC Urban Meyer, it’s difficult to make those assumptions with confidence. Also, with Trevor Lawrence at QB, it’s unlikely that Robinson will see the same high target volume he saw with the Jaguars’ backup-level QBs in his rookie season. Overall, he may have a few solid weeks, but it’s unlikely he’ll have the same level of fantasy impact he did last year.
Week 1
Robinson had just 5 carries for 25 yards while Carlos Hyde had 9 rushes for 44 yards in the Jaguars' Week 1 loss to the Texans. Hyde had 2 receptions for 14 yards. Robinson had 3 catches for 29 yards.
It appears as if Robinson and Hyde are going to mostly split RB carries with Robinson as the preferred pass-catching RB.
It will be difficult to trust either back going forward as anything more than a flex option as they are cannibalizing each other in a struggling offense.

Robinson was a fantasy revelation as a rookie last year, he ranked 8th among RBs in snaps, 6th in carries and 11th in targets. Robinson turned that volume into a RB7 finish in PPR points and RB8 in non-PPR.

That volume is in serious jeopardy in 2021, though, after Jacksonville brought in a new coaching staff and RBs Travis Etienne and Carlos Hyde. Robinson’s touches will decline this season. The question is by how much.

Exactly how this backfield will operate will be 1 of the biggest fantasy storylines of the summer.

Jaguars RB James Robinson has a torn Achilles, according to NFL Network's Ian Rapoport. That not only ends Robinson's 2021 season but also puts his status for the start of 2022 in question. We'll track his rehab this offseason. It looks like Dare Ogunbowale will close out the season as Jacksonville's lead back.

Robinson carted off with torn Achilles'

Jaguars RB James Robinson was carted to the locker room after suffering a non-contact left leg injury in the 1st quarter of Sunday's game vs. the Jets. We'll update his status when we know more. Dare Ogunbowale has stepped in as Jacksonville's lead back.

Update: NFL Network's Ian Rapoport reports that it's a torn Achilles' tendon for Robinson. That not only ends his season but potentially challenges his start to 2022. We'll see how he progresses through the offseason.

Jaguars RB James Robinson (heel, knee) is not listed on the final injury report. He didn’t practice on Thursday but put in a full practice on Friday after being limited all last week. It’s unclear if that means Robinson is ready for a bigger role this weekend vs. the Titans. He’s averaged 12.3 carries and 4 targets over the last 4 games.

Jaguars RB James Robinson (heel, knee) did not practice on Thursday. Insider Mark Long reports that Robinson is expected to get Thursdays off the rest of the season as part of a "load management plan." That plan also seems to include scaling back Robinson's volume on game days. He's just a lower-end RB2 right now.

Jaguars RB James Robinson (heel, knee) remained limited in Wednesday's practice. He'll likely continue to play through these injuries against the Titans this weekend, but Robinson is a shaky fantasy bet until we see him closer to 100%.