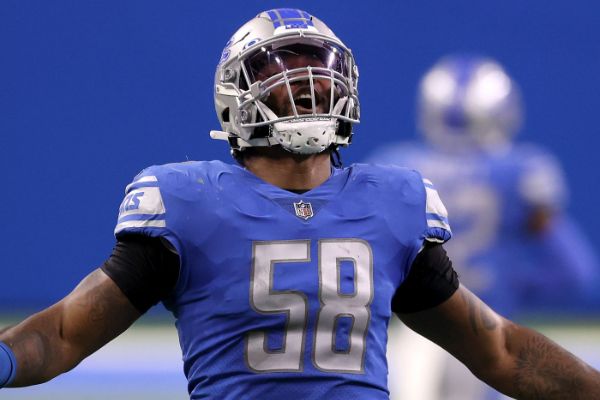 It sounds like the Lions plan to have MLB Alex Anzalone calling the plays in the defensive huddle. But Collins should be in for a full-time role as well and remains the top playmaker in Detroit's LB corps.

Collins cracked the top 30 fantasy LBs in points per game last year despite a Week 1 disqualiication and losing the final 2 games to injury. In between, Collins easily led the team in tackles, including 20 more assists than any other Lion. He also tied for 2nd on the team in passes defensed.

Always a cross-category threat, Collins should be a good bet for more than the 1 sack and 3 total QB hits he contributed as a pass rusher last year. His 11 career INTs and 3 forced fumbles in each of the past 2 seasons highlight further big-play upside.

The Lions have released LB Jamie Collins. The team tried to trade him, but teams were likely scared off by the big contract. The veteran will now be free to sign with whomever, and will likely find a suitor. We'll see if he can recapture IDP value.

Lions HC Dan Campbell confirmed Thursday reports that the team is trying to trade LB Jamie Collins. That makes sense as Detroit tries to go younger at the position. The Lions reportedly plan to increase playing time for rookie LB Derrick Barnes beginning this week. Alex Anzalone still looks like the best bet for snaps for the time being, though we'll see just how much Detroit is looking to change things up. No Lions LB is especially attractive for IDP use right now. Collins could be a low-cost upside option in a new setting.

Collins out vs. Vikings

Lions LB Jamie Collins (neck) is inactive for the 2nd straight game today against the Vikings. Without Collins last week, Jahlani Tavai led the LBs in playing time at 81%, with Jarrad Davis following at 51% and Reggie Ragland 3rd at 49%. Davis led the group with 9 tackles (though just 4 of those solos). This isn't a situation worth targeting for IDP lineups.

Lions LB Jamie Collins (neck) is questionable for Sunday's game against the Vikings. After missing Week 16, he put in just a single limited practice Friday. He doesn't look like a good bet for this game. We'll check his status Sunday morning.

Collins, Kearse out vs. Bucs