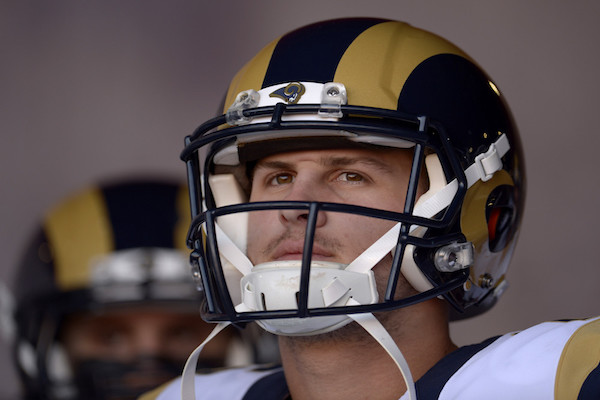 Last year, Goff showed flashes of why he was the top pick back in 2016.

Ultimately, he finished just outside the top-20 in fantasy PPG.

While his supporting cast improved for 2022, Goff’s unlikely to be a go-to streamer this fall.

Lions OC Ben Johnson is passing on HC opportunities elsewhere to stick with Detroit for 2023, according to multiple reports. Johnson elected to skip an in-person interview with the Panthers this week, after already talking with the franchise by teleconference. Johnson was viewed as the favorite for the Carolina job and has also interviewed with the Colts and Texans. He instead sticks with an offense that jumped from 25th in scoring and 22nd in yards in 2021 to 5th and 4th, respectively, this season. Detroit also leaped from 29th in Football Outsiders' offensive DVOA to 5th. Johnson's continued presence is undoubtedly good news for QB Jared Goff and other key Lions offensive pieces.

According to Dave Burkett of the Detroit Free Press, Lions HC Dan Campbell "all but confirmed" Monday that QB Jared Goff will remain the starter in 2023. "He's really a perfect fit for what we do and what we ask," Campbell said. The Rams, of course, paid Detroit draft picks (including 2 first-rounders) to swap Matthew Stafford for Goff 2 offseasons ago. Goff didn't do anything impressive across 14 games in his 1st year with the Lions. But he finished this season throwing 324 consecutive passes without an INT. Goff also finished 15th among QBs in fantasy points per game (depending on your format). He has 2 more years on his contract, though each comes with salaries of more than $30 million vs. dead-cap totals of $10 million and then $5 million if he were to get cut, according to Spotrac. Detroit also holds the 6th overall pick in the upcoming NFL Draft, thanks to the Rams -- along with their own selection at #18. So although Goff looks most likely to open next season at the helm, it's worth noting that Campbell stopped short of actually confirming that the 2023 job belongs to Goff.

Lions QB Jared Goff threw 3 TD passes on 21-of-29 passing for 255 yards in Sunday's lopsided win over the Bears. Goff found TE Brock Wright for a pair of scores, hitting RB D'Andre Swift for the other. He spread targets around, with 10 different Lions catching a pass but none exceeding 5 targets. WR Amon-Ra St. Brown led the team with 5 looks, catching 4 for a team-high 62 yards. It was St. Brown's lowest catch total since Week 9 and fewest targets of any full game this season. Detroit closes the regular season against the Packers, a rematch of a game that finished just 15-9 (in Detroit's favor) in Week 9.

Lions QB Jared Goff threw for 355 yards and 3 TDs in Saturday's loss to Carolina. He hit TE Shane Zylstra for all 3 scores. WR Amon-Ra St. Brown, as usual, led the team with 13 targets and 7 catches, tallying 76 yards. WR D.J. Chark added 4 receptions for 108 on 5 targets. No other Lion caught more than 2 balls. Detroit gets a weak Chicago defense in Week 17, and won't have weather concerns back home in the dome.

Goff, 28, looked like a bridge option for the rebuilding Lions. But he wound up making great strides under 1st-year OC Ben Johnson, putting the former Ram in line to start in 2023. A full plate of weapons -- and an excellent staff -- affords the support to sustain his short-term stock.