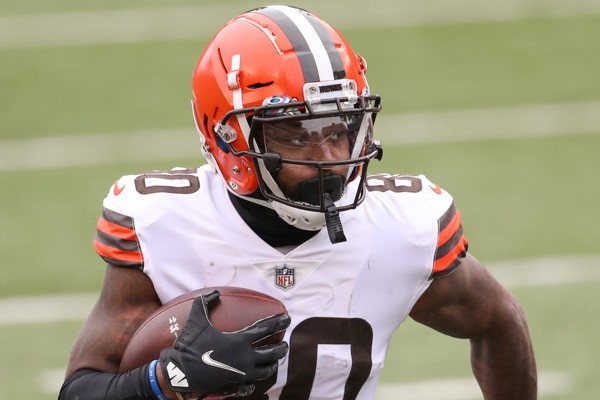 -Landry underwent hip surgery in early February, 2020. He was eased into training camp.

-Extrapolate Landry’s production over that span, and he would have slotted as the WR42 in PPR. Instead, he finished at WR36, fueled by ~8 targets per game sans Beckham.

-Beckham notched a career-low 3 receiving TDs. He’s been held to 6 or fewer scores in all but 1 of his 7 seasons.

-He caught a strong 73.7% of his intended targets. He remained a primary slot target with a low average depth of target (7.9).

-This unit will remain run heavy as long as the backfield remains healthy. Last year, the Browns ranked 4th in rush attempts; 4th in run rate.

-The Browns used a Round 3 pick on speedy WR Anthony Schwartz, but he’s a raw product and a long-shot for year 1 value. Landry should again act as a co-#1 WR alongside Beckham.

Landry even posted 83-1,174-6 back in 2019 alongside Odell Beckham. But that was with Cleveland’s old coaching staff. Clearly, HC Kevin Stefanski has really committed to the ground game. It leaves Landry as an unexciting WR3/4.

Browns WRs Jarvis Landry, Rashard Higgins, KhaDarel Hodge and Donovan Peoples-Jones have been activated from the COVID list. Barring a positive test, they'll all be back for Sunday's game vs. the Steelers.

Browns WRs Jarvis Landry, Rashard Higgins, Donovan Peoples-Jones and KhaDarel Hodge are eligible to be activated from the COVID list on Thursday if they continue to test negative, HC Kevin Stefanski said. So all 4 guys should be back for Sunday's game vs. the Steelers. We'll continue to monitor the situation.

Browns WRs Jarvis Landry, Rashard Higgins, Donovan Peoples-Jones and KhaDarel Hodge have been placed on the COVID list as high-risk close contacts and are out for Sunday's game against the Jets. Those are Cleveland's top 4 WRs. Marvin Hall is the only other WR on the active roster. Ja'Marcus Bradley and Derrick Willies are on the practice squad. We wouldn't mess with that situation in Week 16 fantasy lineups. TEs Austin Hooper, Harrison Bryant and David Njoku should be busy tomorrow. Baker Mayfield, meanwhile, goes from a solid QB1 play to a shaky QB2. Expect a run-heavy game plan from Cleveland.

Update: Bradley and Willies have been promoted from the practice squad.

Browns WR Jarvis Landry revealed Thursday that he suffered a broken rib in the Week 5 win over the Colts. He played his usual allotment of snaps last week, finishing with 3 catches on 5 targets in the blowout loss to Pittsburgh. Landry figures to continue playing through the injury, but it adds weekly risk that he'll aggravate it and miss snaps.

Browns WR Jarvis Landry (hip, ribs) is active for today’s game vs. the Steelers. He only got in a limited practice on Friday and figures to be playing at less than 100% today.