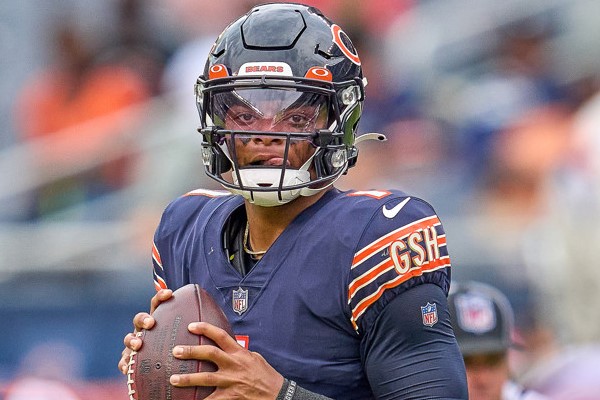 While there’s some refining to be done, we love Fields as an uber-talented passer.

His rushing upside is clear. And an upgraded coaching staff helps boost the case for a 2022 breakout.

However, a lack of playmakers makes it tough to place Fields much higher than the middle of QB2 range. Like so many QBs around him, the 2nd-year man projects as a matchup-based spot-starter.

Bears QB Justin Fields logged just 17 pass attempts in Sunday's 23-20 win over the Texans, completing 8 for 106 yards, 0 INTs and 2 INTs. Through 3 weeks, Chicago has 10 fewer pass attempts than any other team in the league, with the next lowest being a Giants offense that has yet to play in Week 3. WR Darnell Mooney (6 targets) and TE Cole Kmet (3) assumed their expected positions as Chicago's target leaders, but the shares won't matter until the Bears begrudgingly throw the ball more. Each guy caught just 2 balls vs. Houston.

Bears QB Justin Fields completed 7 of 11 attempts for 70 yards and 1 INT in Sunday’s loss at Green Bay. Laughable. The Bears ran only 41 plays, hurt by going a combined 1 for 8 on 3rd and 4th downs. There was simply nothing positive to take away from this one, outside of Fields scoring on a 3-yard run in the 1st quarter. Late in the game, he had a 6-yard rushing score wiped out following a review. He looked to get in on the next play, but the officials thought differently. He’ll look to rebound at home vs. a young Houston defense.

The Bears didn't need QB Justin Fields to do much in a rain-soaked victory over the 49ers Sunday. He completed 8 of just 17 pass attempts for 121 yards and 2 TDs, plus an INT. Fields found WR Dante Pettis for a 51-yard score in the 3rd quarter and Equanimeous St. Brown from 18 yards out in the 4th. The QB added just 28 yards on 11 carries. The weather definitely dampened the Week 1 production. We'll see whether a Week 2 visit to Green Bay can help make Fields a true fantasy starting option for a Week 3 home date with Houston.

Chicago has been hit with heavy rains this morning. It looks like the worst of it will be gone by kickoff of 49ers-Bears, but there will be lingering showers -- and a wet field. The forecast also calls for 15-20 mph winds. Less than ideal scoring conditions, although this looked like a low-scoring game anyways. Expect lots of running from both teams.

Fields needs work as a passer, but his rookie-year rushing output was enough to excite us long-term. Chicago moving on from Matt Nagy was a fine first offseason step. Next up is upgrading the supporting cast around David Montgomery and Darnell Mooney. That's failed to happen this offseason, putting a damper on Fields' short-term upside.