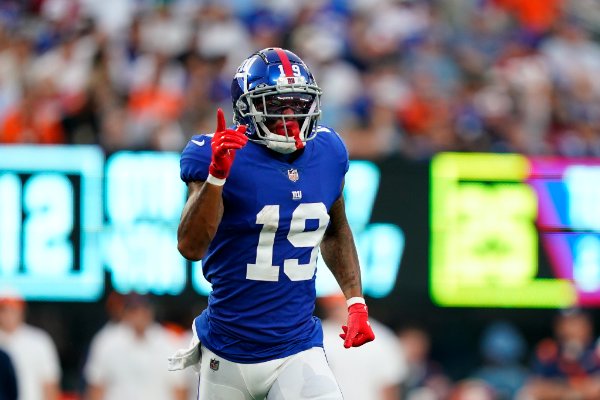 There’s at least as much to be wary of with Golladay as there is to be encouraged by. And that’s why fantasy drafters are collectively wary. The 28-year-old (until November) wideout sits 56th among WRs in FFPC best-ball drafting and 57th on Underdog. Golladay’s 2 healthiest seasons to date – 2018 and 2019 – found him finishing 21st and 9th in PPR points. We’re not saying his ceiling reaches to either of those levels this year. But it’s easy to see plenty of upside – especially on a weekly basis – from his low-WR5 starting point. Throw in the low ADP for QB Daniel Jones as well, and Golladay looks plenty attractive as a best-ball target.

Giants WRs Kadarius Toney (hamstring) and Wan'Dale Robinson (knee) are out for Sunday’s game vs. the Bears. Neither guy practiced all week. With WR Sterling Shepard out with his torn ACL, the Giants are down to WRs Richie James, David Sills, Kenny Golladay and Darius Slayton.

WR Kadarius Toney barely got onto the field in Sunday's win over the Titans. He played just 12% of the offensive snaps and ran a route on just 10% of dropbacks, according to Pro Football Focus. That's terrible usage for a guy who seemed to have a shot at serving as the Giants' #1 wideout. Little else went right for the passing game to push Toney aside. RB Saquon Barkley led the team in targets and catches. Richie James served as the top-producing wideout, with 5 catches for 59 yards among 6 targets. Sterling Shepard led the team with 71 receiving yards, thanks mostly to a 65-yard TD. Kenny Golladay garnered just 2 targets, and rookie WR Wan'Dale Robinson left with a knee injury.

Shepard "ready to go" for Week 1

Giants WR Sterling Shepard (Achilles) said Tuesday that he's "ready to go" for this weekend's opener vs. the Titans. ESPN's Jordan Raanan confirms that Shepard "fully plans on playing" on Sunday. It's a remarkably quick turnaround for Shepard, who tore his Achilles last December and was just activated from the PUP list 2 weeks ago. Shepard shouldn't be in Week 1 fantasy lineups, but he's worth stashing on benches and complicates the outlooks of WRs Kadarius Toney, Wan'Dale Robinson and Kenny Golladay.

Golladay had "procedure" this offseason

Giants WR Kenny Golladay had a "procedure" this offseason, GM Joe Schoen said Thursday. It sidelined Golladay through the spring, but Schoen gave no other details. Perhaps that explains why Golladay has played "with the stiffness of a mannequin" this summer, as ESPN's Jordan Raanan wrote. We continue to avoid Golladay in fantasy drafts.

Giants HC Brian Daboll stirred murmurs this week over the roster status of WR Kenny Golladay. Asked whether the wideout's roster spot was secure, Daboll answered by saying all the receivers were "competing." He sounded different Monday, according to the team website: “He’s done a good job with what we’ve asked him to do. He’s competed, and he’s played multiple spots for us. He’s continuing to learn our offense. I think he’s done a good job of learning it." Golladay's contract has kept him from being a cut candidate, so we're not taking this as anything more than coachspeak. Golladay has looked bad in a pass offense that has looked shaky-to-poor overall. He should not factor prominently into anyone's fantasy football plans.

Golladay stunk in his 1st Giants season, after signing a contract that looked like a mistake for the team. Still in his prime years, Golladay must prove he can stay healthy (he has missed 20 games through 5 seasons) while contending with Kadarius Toney, Wan'Dale Robinson and Saquon Barkley for targets. We'd bet on some level of rebound vs. the 2021 low point, but there's not much to get excited about here.