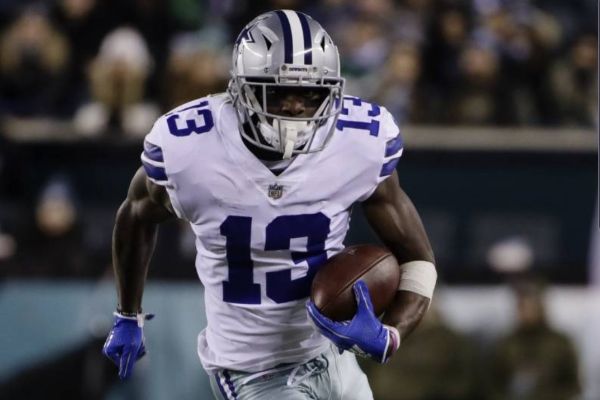 Week 14
At Washington, Gallup had 5 catches in 9 targets for 60 yards. All those figures were slightly more than his career average and ranked 2nd on the team after WR CeeDee Lamb. Gallup has been neither a consistent deep threat (averaging 6.8 yards per target, lowest in his 4 seasons) nor a true possession receiver (56% catch percentage).
Gallup is 1 of the most consistent producers this season. He has 4 consecutive games with exactly 5 catches. You can pencil him in for 5 receptions Sunday against the Giants. However, his yardage in those games has varied between 36 and 106 and he has scored only 1 TD in his 6 games this season. Gallup is worthy of being on a lower rung of your fantasy WR roster.
Week 13
Gallup had his 3rd game in a row with 5 catches on 10, 8 and 9 targets in those games. He totaled just 36 yards. The Bojangles of Wideouts was at his toe-tapping best on his 1st TD this season, a 1-yarder with a leaping grab in the back right corner of the end zone in the 1st quarter, and another along the left sideline.
There’s a clash between Gallup’s recent 5 catches per game and his career averages of 3.7 catches against Washington and 3.5 vs. the Giants, his next 2 opponents. We can expect about his 2021 average of 4.4 receptions per game, 0.9 more than his career average. Keep an eye on injury reports to see whether WR Amari Cooper might play a bigger role on Sunday.
Week 12
Gallup had 5 catches in 8 targets for a team-high 106 yards. We commented a week earlier that he should have more than 5 catches in 10 targets at Kansas City. Against the Raiders on Thanksgiving, Gallup was targeted only once in the 1st quarter. His production picked up during a 4th-quarter rally that sent the game to OT, with 3 catches for 90 yards, including a 41-yard gain.
Though Gallup has proven worthy of a starting role, he likely would be dropped down in QB Dak Prescott’s pecking order if WRs Amari Cooper and CeeDee Lamb returned. Cooper did not practice Monday, and HC Mike McCarthy said Tuesday that Cooper’s participation is TBD because he is “still not feeling the best;” Lamb passed the concussion protocol and practiced fully. Gallup has not scored yet in 4 games this season, but in the last 2 games he has been on the field for 90% of snaps.
Week 11
Gallup had 5 catches on a team-high 10 targets for 44 yards. He would have had more than double that yardage if QB Dak Prescott hadn’t overthrown him on a deep pattern and Gallup himself hadn’t dropped a pass that would have gone for a 1st down. Prescott also missed Gallup in the end zone on 3rd down in the 1st quarter, and the Cowboys settled with an FG.
What was perhaps the NFL’s deepest WR corps will not have WR Amari Cooper (Covid list) and may not have WR CeeDee Lamb, the Cowboys’ top 2 receivers (94 catches and 1,323 yards combined) for their traditional Thanksgiving home game. It will be important during the short week for Gallup and Prescott to get on the same page.
Week 10
It was a warm return to the starting lineup for Gallup, who hadn’t played since Week 1 because of a calf injury. He was back to his role of tiptoeing along the sidelines to make catches and stay inbounds. Against Atlanta, he caught 3 of 5 targets for 42 yards and had a surprising drop on a slant pattern. Gallup was 1 of 10 receivers with a catch.
Gallup’s return was a boost to the receiving corps. For other WRs it wasn’t good news. WRs Noah Brown and Malik Turner each caught the 1 pass thrown to them, and versatile WR Ced Wilson wasn’t even targeted. OC Kellen Moore can find ways to integrate the backup WRs into the passing attack in what should be shootouts in the next 2 weeks.
Week 1
Gallup remains a master of the sideline. That showed up most graphically on a pass when Tampa Bay coach Bruce Arians and the NBC crew thought Gallup had brought only 1 foot down in bounds. Slow-motion video for the coach’s challenge showed that before he put his left foot just inside the sideline, he had dragged his right toe behind as he caught the ball. That was 1 of his 4 catches in 7 targets for 36 yards. But he left early with a calf injury.

Gallup will be out for 3 to 5 weeks because of a strained calf muscle. Cedrick Wilson is the leading candidate to take over Gallup’s role during the weeks he is out. At Tampa Bay, Wilson caught all 3 targets for 24 yards.

Gallup faces plenty of target competition from Amari Cooper and CeeDee Lamb, capping his ceiling in that area. But we’d bet on these Cowboys continuing to pass on more than 60% of offensive plays and growing that target pie for the entire offense. Gallup hung close to Cooper and Lamb in targets last season, sees his targets deeper downfield and carries an ADP 7 rounds behind his WR teammates.

That makes him a solid addition in best-ball drafts right now, though it also puts him right in the range of our projection for him. The situation gives Gallup weekly upside but will almost make it tough to count on him week to week in fantasy lineups.

Monday's MRI confirmed the torn ACL in Cowboys WR Michael Gallup's left knee. NFL Network's Ian Rapoport hears that it was a "clean" tear and that Gallup is expected to make a full recovery. Still, the timing of the injury means that Gallup isn't a lock to be ready for the start of the 2022 season. We'll track his rehab.

Gallup believed to have torn ACL

Cowboys owner Jerry Jones said after Sunday's loss to the Cardinals that WR Michael Gallup is believed to have a torn left ACL. He'll undergo an MRI on Monday to confirm that diagnosis. If it's a torn ACL, Gallup will miss Week 18 and the playoffs and hit free agency in March rehabbing a serious injury. We'll track his rehab and see where he ends up signing. Cedrick Wilson will replace Gallup as Dallas' #3 WR.

Cowboys WR Michael Gallup hurt his left knee on a TD catch in the 2nd quarter of Sunday's game vs. the Cardinals. Stay tuned for an update.

Update: Gallup has been ruled out.

Cowboys WR Michael Gallup (calf) is active for today’s game vs. the Falcons. Consider him a risk/reward WR4 in his first action since Week 1.

The Cowboys are activating WR Michael Gallup from IR, making him eligible to play Sunday against the Falcons, according to . It'll be his 1st game action since straining a calf in Week 1. Gallup will be a risky fantasy prospect in his 1st game back, but his return can only help QB Dak Prescott in what already looked like a prime rebound spot.