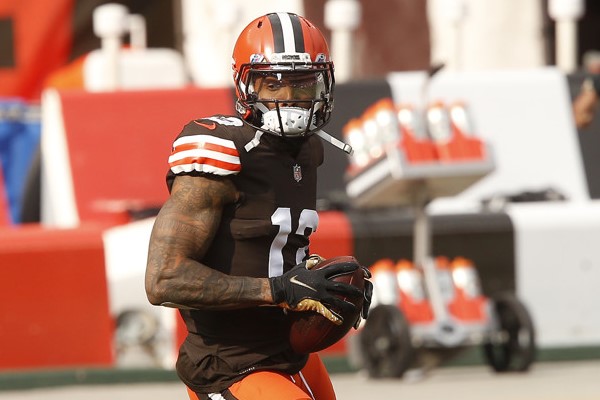 Week 14
Beckham Jr. seems to be getting adjusted well in Los Angeles. He was second on the team in targets with 7, catching 6 for 77 yards and a TD. This was his 3rd straight game with a TD for the Rams.

If you throw out his first game with the Rams, Beckham Jr. seems to be proving he might not have been the issue in Cleveland. He is averaging over 4 catches on 7 targets in the last 3 games, gaining 62 yards and scoring a TD.

OBJ popped up on COVID list on Tuesday, which makes his status for this week a bit of a question mark. Assuming he can get activated before Sunday, he should remain a fantasy difference maker down the stretch, especially with Matthew Stafford absolutely balling out.
Week 13
Beckham scored a short-range TD in an easy win over Jacksonville. But he ran only 59% of the routes, played 53% of the snaps and saw just a 13% target share. He was likely limited by his hip injury, one that cost him some practice time leading up to Week 13. We’ll keep an eye on that. For now, though, look for him to slot in as a WR2/3 for a huge showdown with Arizona.
Week 12
Odell Beckham finally happened and not just with the Rams but all season long. He caught 5 of his team-high 10 targets for 81 yards and a TD. 10 and 81 are the most targets and yards he has seen all season long. His 5 catches tied a season high. Most importantly, it was the first time he scored a TD all season long.

With Robert Woods out of the picture, Beckham has a tremendous opportunity to finish the year strong. He should be 2nd or 3rd in targets most weeks. HC Sean McVay is a noted play caller who should be able to find unique ways to get him involved most weeks.

Cooper Kupp is clearly the alpha in this offense. Van Jefferson and Tyler Higbee will have their moments. But, with Robert Woods done for the year, it's fair to believe Beckham can be a real contributor in the fantasy playoffs.
Week 10
Beckham was surprisingly limited in his Rams debut on Monday night, just a few days after joining the team. He caught a 5-yard pass on the game’s first offensive snap and had a 13-yard grab in the 2nd quarter. Beckham’s only other target was an ill-advised heave from QB Matt Stafford that was picked off.

He now gets a well-timed Week 11 bye to absorb this new offense and build some chemistry with Stafford. We’d expect Beckham to return in Week 12 with something close to a full-time role. There’s exciting upside here down the stretch.
Week 7
Beckham entered Thursday night iffy to play but wound up leading all Browns WRs with a 61% snap share. He drew 6 targets, 2nd most on the team, but caught only 2 for 23 yards on a water-logged night with Case Keenum filling in for Baker Mayfield.

Beckham went down hard on his already-injured shoulder late in the 2nd quarter and was briefly questionable to return but did make it back on the field for Cleveland’s 1st drive of the 2nd half.

We’ll watch the wideout’s practice participation this week, leading up to an upside matchup with the Steelers on Sunday. Mayfield returned to practice Wednesday and might be on track for the game as well.

Beckham and his QB have done little besides let fantasy managers down so far this year, but there’s enough talent and opportunity to make the situation worth watching going forward.
Week 6
Week 6 gave us another just-OK game for Beckham. He led the Browns with 8 targets and 5 catches against the Cardinals, the longest of which went for 25 yards. And he lost both TDs to Donovan Peoples-Jones (1 a first-half ending hail mary).

Beckham has seen a mere 21.3% target share in his 4 games back, though he has garnered 7+ looks in 3 of 4 surrounding a tougher matchup with the Chargers.

Jarvis Landry’s looming return from a knee sprain and Baker Mayfield’s re-injured shoulder -- which will knock him out for at least Week 7 -- stand as potential challenges to Beckham’s fantasy production going forward. For now, he’s mired in WR3 range.
Week 5
Beckham took a backseat to everyone in Week 5. Beckham finished 5th on the team targets while only catching 2 for 20 yards. The only good news for Beckham’s fantasy owners is he at least led in pass routes. The problem is at this point it seems that Baker Mayfield has better chemistry with Donovan Peoples-Jones (5-70) and Rashard Higgins (3-29-1). Beckham might have come back earlier than he wanted due to the injury to Jarvis Landry. This could be the main reason why he is struggling to find consistency.
Heading into Week 6, Beckham can’t be started with confidence until we see him perform on the field.
Week 4
Through his first two games Beckham has immediately emerged as the go-to target for Baker Mayfield from a usage standpoint. In week 4, Beckham paced the team in targets (7), deep targets (4) and end zone targets (2). None of these great opportunities resulted in any production as Beckham failed to catch any of his deep passes or any of his end zone looks. The league average conversion rate for both these metrics is about 40%, so better days should be ahead of Beckham if this usage keeps up.
Those better days might not be until Week 6 as the Browns take on the Chargers in Week 5. The Chargers this season have held notable WRs Terry McLaurin (4-62), Amari Cooper (3-24) and Tyreek Hill (5-56) well below expectations this season. This makes Beckham tough to trust as a WR3 in Week 5.
Week 3
Beckham made his season debut in Week 3 after sitting inactive through the 1st 2 games. He immediately reminded us that he can get downfield, logging 149 air yards. That’s higher than any other player’s per-game average through 3 weeks.

Cleveland also sought to get Beckham involved early. Baker Mayfield targeted him on the Browns’ 2nd play; twice total on the initial drive. Beckham got his 3rd target on the 2nd play of Cleveland’s 2nd drive, though defensive penalties wiped out that one.

Beckham’s 4 official targets by halftime trailed only Kareem Hunt, and he led the team with 9 by the end of the game. Beckham caught 5 of those for 77 yards, with a long of 26. His 64% playing time trailed Donovan Peoples-Jones among Cleveland wideouts by just 1 total snap, and Beckham led the group in routes run.

Expect the playing time to grow going forward. Beckham looks like a comfy starter in a positive Week 4 matchup at Minnesota.
Week 2
The injury to Jarvis Landry opens the door for Odell Beckham to return to a prominent role right away. The issue for Beckham owners is he chose to sit in weeks 1 and 2 and says he’s still not 100%. It is hard to recommend Beckham as a start until we see him healthy and productive.

After posting 1,035 yards in his debut season with the Browns, Beckham’s progress was slowed by a torn ACL last fall. Beckham saw heavy downfield usage in year 1 under HC Kevin Stefanski and a still-developing Baker Mayfield.

Now 28, Beckham enters a critical season. His health will be worth monitoring, but he’s expected to be 100% for Week 1. Plus, the fact that Cleveland will put him right back in a featured role means they have some level of trust in the 3-time Pro Bowler.

If Beckham’s ADP stays in the Round 7 range, he’ll be worth the risk as a WR3.

Rams WR Odell Beckham has been activated from the COVID list. He's eligible to play vs. the Seahawks on Tuesday night and can be stuck back into Week 15 fantasy lineups.

This week's Seahawks-Rams game has been moved from Sunday to Tuesday, according to multiple reports, as the Rams deal with a rash of COVID positives. This game won't be on the DFS main slate but will still count for Week 15 in season-long leagues. We'll see if RB Darrell Henderson, WR Odell Beckham and WR Tyler Lockett are able to clear COVID protocols in time for the game.

Update: This game will kick off at 7 pm ET on Tuesday.

Rams WR Odell Beckham has been placed on the COVID list. We'll track his status throughout the week, but fantasy owners should plan on being without him for Sunday's game vs. the Seahawks. Beckham played in Monday night's win over Arizona, so we'll see if there's any COVID-related impact from that -- either on the Rams or Cardinals.

Beckham off the Week 14 injury report

Rams WR Odell Beckham is not listed on the Week 14 injury report. It's notable after he played just 53% of the offensive snaps last week -- presumably because of the hip pointer he was playing through. Beckham should be back to a full-time role vs. the Cardinals on Monday night.

Rams WR Odell Beckham (hip) is active for today’s game vs. the Jaguars. He got in limited practices on Wednesday and Friday, but it never seemed like he was in jeopardy of missing this one. We’re expecting Beckham to be an every-down player today. He’s a WR2 with upside in fantasy lineups.