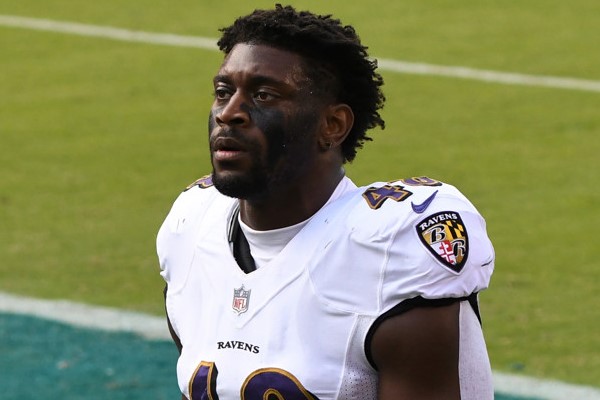 Ravens LB Patrick Queen (thigh) is active for today's game against the Steelers. Play him as planned in your IDP lineups.

Ravens LB Patrick Queen (thigh) is questionable for Sunday's game against the Steelers. He closed the week with a full Friday practice, which would seem to put him on track to play. We'll confirm Queen's status Sunday morning.

Ravens LB Patrick Queen said Wednesday that he's "pretty sure" he'll play Sunday against the Steelers, according to Jonas Shaffer of The Baltimore Sun. Queen left last Sunday's win over the Broncos with a thigh injury. He put in a limited practice Wednesday. We'll see about his status the rest of the week.

Ravens LB Patrick Queen left Sunday's win over the Broncos early with a thigh injury. We'll see about his status for Week 14 and beyond.

Update: HC John Harbaugh said Monday that it's merely a bruise, according to ESPN's Jamison Hensley. We'll watch his status this week.

The Ravens are acquiring LB Roquan Smith from the Bears for 2nd- and 5th-round NFL Draft picks. Smith is in the final year of his rookie contract, so we'd bet on an extension with Baltimore following. His arrival likely means the end of full playing time for Ravens LB Patrick Queen. They'll likely start together, but the move for Smith signals dissatisfaction with the middle of the defense. Queen has become a full-timer this season after seeing 80% and then 76% the previous 2 seasons. Smith's departure from Chicago leaves tackle upside for LB Nicholas Morrow, who was already playing full-time snaps. Joe Thomas stands 3rd among Bears LBs in playing time currently and might be the top candidate to absorb vacated snaps.

Update: The Ravens are also sending LB A.J. Klein to the Bears, according to NFL Network's Ian Rapoport. He'll likely get at least a shot at stepping into Smith's vacated role.