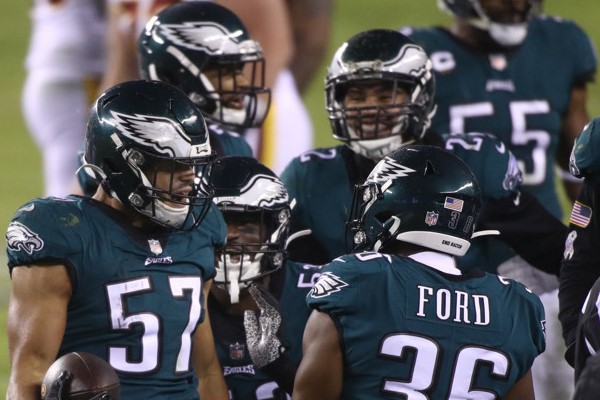 Eagles EDGE Josh Sweat went to the hospital after leaving Sunday's loss to the Saints on a stretcher with a neck injury. He was treated and released by the end of the night, though. He said afterward via Twitter that he expects to return this season. HC Nick Sirianni didn't offer details at his Monday press conference, saying the team is taking it day-by-day with Sweat's injury. We wouldn't bet on him making it back for the Week 18 game against the Giants, which Philly still needs to land the top playoff seed and a Round 1 bye.

Eagles EDGE Josh Sweat suffered a scary head/neck injury in the 1st quarter of Sunday's game against the Saints. Trainers strapped him to a board and took him off the field on a cart. Sweat did slightly raise a thumb up before reaching the tunnel. We'll watch for updates on his condition. He's obviously out for the rest of Week 17.

Gardner-Johnson out with kidney injury

Eagles S C.J. Gardner-Johnson suffered a lacerated kidney in Sunday night's win over the Packers and is out indefinitely, according to NFL Network's Tom Pelissero. It's reportedly not expected to end Gardner-Johnson's season, but we'd bet on at least multiple missed games. That makes Gardner-Johnson OK to drop for a replacement in many IDP leagues. You can stash him in deeper formats, though.

Eagles S C.J. Gardner-Johnson suffered a rib injury in the 1st quarter of Sunday night's game against the Packers and is questionable to return.

The Eagles have signed former Buccaneers DT Ndamukong Suh to a 1-year deal. The move comes just days after Philly allowed Washington's rushing offense to dominate time of possession in the team's 1st loss of the season. We'll see how much Suh actually helps that area, though. According to ESPN's Seth Walker, Suh ranked 69th among 70 DTs in run-stop win rate last season.

Philadelphia Eagles, DEF PHI There is no dynasty data for this player.