D/ST rankings are probably the most worthless set of preseason info.

OK, “worthless” might be a little strong. But really, how many of us plan to start a single team D all year? We’re all gonna play the matchups at some point in the schedule, right? Even if you’re the one who drafted the Jaguars (probably too early), you’d probably rather sit them vs. the Patriots in Week 2 -- right?

The good news, Jaguars drafter, is that only New England and Pittsburgh (Week 11) look like poor matchups for the Jacksonville D this season -- and each of those comes at home. So you just might be able to comfortably use the Jaguars pretty much every week.

Who else gets a positive run? Which schedules should we be wary of? Before we get to that, let’s step back a little.

Why do we want to target certain matchups for our team defenses and avoid others?

Frankly, that’s probably not a question you’re asking. The answer is obvious: Some offenses (DeShone Kizer’s Browns, for example) present a bunch of upside potential for opposing defenses. Others (any year’s Patriots) score a bunch of points and don’t turn the ball over much. That’s a bad situation for your fantasy defense.

But do you know how much of an effect those matchups might have? Answer: Quite a bit.

I looked back over the past 8 years of fantasy points allowed on NFL.com (as far back as their data goes. The range is immense.

I started by finding the 8-year median for each spot in the rankings. Then I found the median for that whole set (7.555 fantasy points, in this particular format). And then I compared each ranking spot with that overall median. Here are the results:

Yep. The top of that chart means the most generous matchups over the past 8 years have produced at a rate of 172% vs. the median. The top 9 friendliest matchups have added 20+ percent to opponent D/ST scores.

On the opposite end, the least favorable matchups over the past 8 years have sapped 65% of D/ST scoring. The bottom 10 spots have cost team defenses more than 20%.

Where Does the Scoring Come From?

You know the main scoring categories for team defenses in most fantasy leagues. But which one(s) most strongly impact the fantasy points. Let’s check out the correlations over the past 8 years … 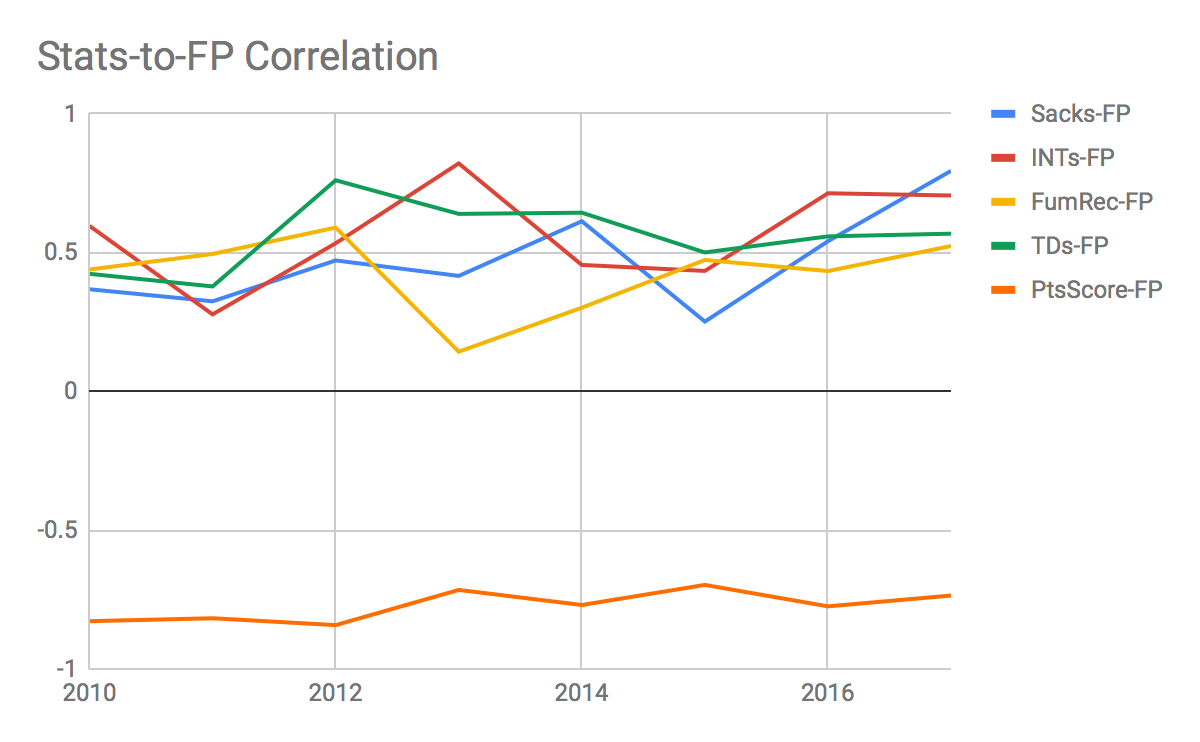 Most of those categories seem pretty closely bunched, huh? I checked the correlations between each listed category and fantasy points allowed to defenses for each year from 2010-2017. And the 8-year medians were mostly close to each other.

The median correlation over the past 8 years between actual offensive points scored and fantasy points allowed to defenses was -0.772. That means it’s inversely proportional, and more closely correlated than the other fantasy-scoring categories.

In short, we should look first at the worst scoring offenses if we want to target the best matchups for our fantasy defenses.

That was a nice bit of info to learn, but what about projecting for the season yet to come? How can we know which offenses are going to stay down and give us prime matchups for our fantasy defenses?

Well, let’s take a look at whether any of these stat categories carry over year to year ... 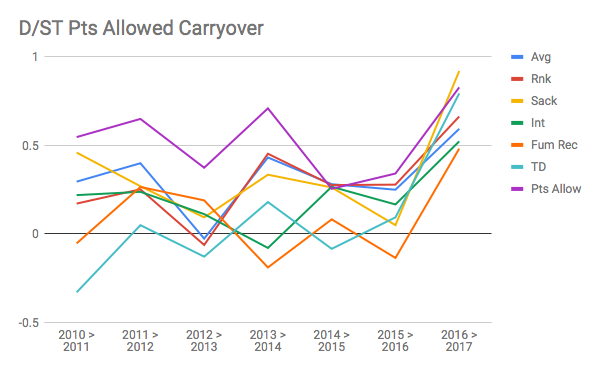 Once again, it’s actual points scored leading the way -- well ahead of any other category considered here. Let’s run through the 8-year median year-to-year correlations for each category:

The teams that score the fewest points on offense tend to allow the most fantasy points to defenses. And vice versa. And that’s held true season after season over the reviewed span.

Of course, the point here is to figure out which matchups we should target early in 2018 -- before we get a new season’s trends to follow.

With all of the above info in mind, I grouped offenses into good, bad and neutral matchups. I stopped at 8 for the “good” group, 1 short of the 9 from that chart near the beginning of the article. There are certainly other candidates, but none I felt comfy boosting into green territory right now.

The “bad” tier includes 10 teams, matching the 10 from the red portion of that earlier table. That leaves 1 extra team in the neutral section.

In alphabetical order by category ...

The Bucs might not belong in this tier by the season’s 2nd half, but they do right now with Ryan Fitzpatrick set to start 3 games and Peyton Barber the only thing going in the backfield. The Raiders, meanwhile, must prove they don’t belong here. Five of the past 6 Oakland teams ranked among the league’s bottom half in scoring offense. Same for the Giants, who finished bottom-6 in scoring each of the past 2 years.

This group should be pretty easy to go along with.

Dallas has a chance to be a “good” matchup if the O-line issues persist. The Bears and Browns each made for very nice target matchups in 2017, but each also presents big reasons for 2018 optimism. We’ll give them benefit of the doubt for now (but probably keep them in mind when searching the matchups week to week as the season opens). A healthy Eagles offense would fit better in the “bad” section, but we don’t know about Carson Wentz or Alshon Jeffery for Week 1 (and perhaps beyond).

Here’s the full NFL schedule grid marked for positive and negative D/ST matchups. (Both white and gray boxes represent neutral matchups.) In season, we know that we’ll generally want to target home favorites the most when streaming defenses and look less to teams on the road. For now, though, I just marked the opponents regardless of location.

Among our top 12 defenses, the Rams start nicely, at the Raiders and home for the Cardinals before a pair of tough home matchups (Chargers and Vikings). The fact that those 2 come at home should help. The Chargers get a solid start as well: home for the Chiefs and then at the Bills, with 4 more potentially usable matchups beyond a visit to the Rams in Week 3.

The Ravens open with a pair of nice home matchups sandwiching a neutral trip to Cincinnati. After that, however, comes a stretch of 4 road games in 5 weeks plus consecutive negative matchups vs. the Saints, at the Panthers and vs. the Steelers leading up to the Week 10 bye.

The Bears present a sneakily usable 1st-half schedule. You’ll obviously want no part of them at Green Bay in the opener, but then come 4 straight potentially starter-worthy weeks (sandwiching the Week 5 bye), and then 2 more (vs. the Jets, at the Bills) after a no-thanks matchup with the Patriots.

The Texans jumped up our rankings after I went through this exercise. You won’t want to start them in Week 1 (at New England), and you probably won’t want to use them in Week 2 (at Tennessee). But after that comes A LOT of potentially usable weeks, for a defense returning DE J.J. Watt and OLB Whitney Mercilus from injury, adding S Tyrann Mathieu and replacing ILB Brian Cushing with Zach Cunningham (a change that took place during last season).

If you draft the Texans, here are a few potential 2-week fill-ins (in alphabetical order):

Cincinnati (at Indy, vs. Baltimore)
New Orleans (vs. Tampa Bay, vs. Cleveland)
Washington (at Arizona, vs. Indy)

If you’re looking to draft a pair of defenses to try to avoid early-season streaming, combining the Chargers with the Bears looks good.

In case the type on that image is too small: The Chargers are usable vs. the Chiefs in Week 1 (Bears at Packers), then Chicago visits Arizona when we’d rather not use the Chargers at the Rams. The Chargers then host the Raiders when the Bears hit their Week 5 bye, and the Bears host the Jets during L.A.’s Week 8 bye.

If you’re specifically looking to stream, here’s a potential 1st-half path of defenses likely to be available in most leagues:

Week 1: Detroit vs. the Jets
Week 2: Washington vs. Indy
Week 3: Cleveland vs. the Jets
Week 4: Green Bay vs. Buffalo (also Cleveland at Oakland, depending on how each starts)
Week 5: Cincinnati vs. Miami (Bengals also worth a look for Week 2 vs. Baltimore)
Week 6: Tennessee vs. Baltimore (there’s a chance the Titans look good on D)
Week 7: Indy vs. Buffalo (let’s just say “vs. Buffalo” should be a target all year)
Week 8: K.C. vs. Denver

Is Josh Jacobs' schedule a mark in his favor for 2020?

Is Lamar Jackson going too early after his breakout? Should we bother with any of the star wideouts coming off injury? And are Joe Mixon and Nick Chubb heading for bust turns? This show will matter for your fantasy football draft.

Even if Raheem Mostert Stays a 49er, Can He Deliver?

The RB broke out in the 2nd half of 2019, but contract issues have produced a trade demand. What's next?