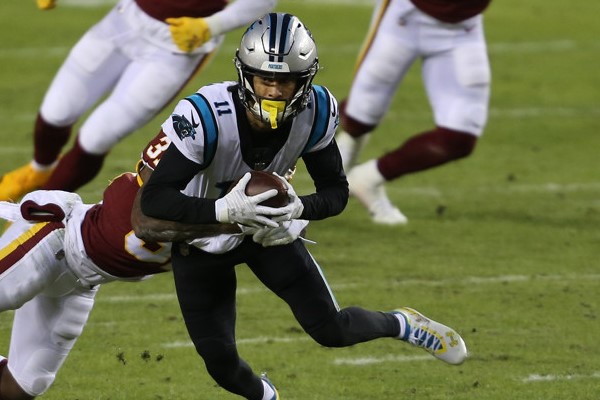 Only 7 WRs have seen more targets than Anderson over the last 3 weeks. Of course, the volume hasn't led to much fantasy production. It will eventually -- we think. But Anderson remains a shaky fantasy play until we see him get going with Sam Darnold.

Week 6
Anderson caught 3 of 11 targets for 11 yards and 1 TD in Carolina's Week 6 loss to the Vikings.
It was a dismal performance from Darnold and the Panthers as Robby caught just 3 of 11 balls. Anderson saved his day with a 7-yard TD with under 2 minutes left in the game to send the game into OT.
Anderson struggled with drops in this one and Darnold struggled with accuracy, which is a terrible combination for efficiency. It led Robby to catching a putrid 27% of targets in his direction.
Anderson has seen some better volume recently but is tough to trust as anything more than a WR3/WR4 as the Panthers continue to struggle offensively.
Week 5
Another game, another missed opportunity.

A week after garnering 11 targets to trail D.J. Moore by just 1 for the team lead, Anderson tied Moore for the lead with 7 looks in Sunday’s loss to the Eagles. He caught only 2 of them for 30 yards, though.

Anderson narrowly missed an early 2nd-quarter connection that would have been a 50-yard TD when CB Avonte Maddox made a tremendous play to cut in front and knock the ball away. Otherwise, QB Sam Darnold struggled through a game that produced 3 INTs and his worst passer rating of the season by a wide margin. To be fair, there were also a couple of catches Anderson probably could (should?) have made but didn’t.

Anderson’s usage the past 2 weeks still leaves some room for optimism. He has seen 23.7% target share over that span after just 10.3% through the 1st 3 weeks. And those 2 games have followed HC Matt Rhule saying they needed to get Anderson the ball more.

Don’t be shocked if it finally clicks 1 of these weeks. The fact that it hasn’t through 5 games, though, means we can’t trust Anderson too high in the WR rankings.

Minnesota Vikings
New York Giants
Atlanta Falcons
Week 4
Anderson was both targeted and missed often at Dallas in Week 4. He caught 5 passes for a modest 46 yards, but QB Sam Darnold missed Anderson on 6 other attempts. The WR’s 1 carry on an end-around added just 3 yards. Anderson was targeted fewer times than WR D.J. Moore and yielded 2 targets to WR Brandon Zylstra.
Coming off a 1,000-yard season in his 1st year with Carolina, Anderson has just 10 catches in 2021 with only 1 going for more than 18 yards. His reduced role this season has been mostly as a short-yardage receiver. In his last 3 seasons with the Jets, he averaged 6 TDs per year. Anderson has just 4 TDs in his 20 games as a Panther and is not currently a viable fantasy option.
Week 3
Another dud. On a night when QB Sam Darnold chucked for 304 yards, Anderson finished with just 8. He caught 1 ball on 2 targets. Four Panthers -- D.J. Moore, Terrace Marshall, Chuba Hubbard and Dan Arnold -- saw more targets.

Anderson has now TOTALED 11 targets and 5 catches through 3 games. This after averaging 8.5 targets and 5.9 catches per game last year.

And the crazy thing is that Anderson’s playing time hasn’t changed. He’s played 73% of Carolina’s offensive snaps and run a route on 87% of pass plays. Last year’s rates: 78% of the snaps and 88% of the routes. Simply put, Darnold just isn’t looking Anderson’s way. It’s clear that Moore has emerged as the top dog in this passing game.

Better days are ahead for Anderson if he continues to be on the field as much as he has so far. But they’ll need to be MUCH better if he’s going to be a fantasy asset. We’d hang on to Anderson in fantasy leagues of 12+ teams. But make him earn his way back into your starting lineup.
Week 2
Anderson ran 35 routes in Week 2; only 3 fewer than D.J. Moore. Yet Anderson was out-targeted 6-11 and posted just 3-38 receiving. This follows a 1-57-1 opener. Sam Darnold did miss Anderson on a couple of deep balls, including 1 that could have gone for a score. Overall, though, it’s becoming clearer that this offense favors the catch-and-run ability of Moore over Anderson. Treat the former Jet as a matchup-based WR3 going forward. An indoors matchup with Houston at least provides hope of a bounce-back.
Week 1
Anderson caught just 1 pass in the opener vs. the Jets. Luckily, it went for a 57-yard score when he easily got behind the defense on a deep post. But, other than that, Anderson saw just 2 other targets. The 1st fell incomplete when Anderson broke toward the sideline when QB Sam Darnold expected him to break inward. Anderson had a step on the defender on his 3rd target but was overthrown.

RB Christian McCaffrey (9), WR D.J. Moore (8) and WR Terrace Marshall (6) all saw more targets than Anderson in this one.

The good news is that Anderson played 81% of the offensive snaps and ran a route on 89% of pass plays. Those numbers are right in line with Anderson’s 2020 rates (78% snaps, 89% routes). So as long as that continues, busier days are coming.

But we also shouldn’t be surprised if we get a few more low-volume games from Anderson considering how deep this Carolina pass-catching corps is. Consider him a volatile WR3 going forward.

Surprisingly, Anderson out-produced DJ Moore in 2020. He filled a short-range role in an up-and-coming offense led by HC Matt Rhule and OC Joe Brady. The result was a career-best fantasy finish (WR20).

2021 should find him in a similar role. And this time, he’ll catch passes from someone he’s familiar with: Sam Darnold. While Darnold’s accuracy remains a weakness, volume should propel Anderson to another low-end WR2/WR3 finish. He’s still a value selection with an ADP in Round 8.

The Panthers and WR Robby Anderson have agreed to a 2-year, $29.5 million contract extension. Anderson was set to hit free agency next offseason but is now signed in Carolina through the 2023 campaign. It's confirmation that he remains a big part of the Panthers' passing game after ranking 8th among WRs with 138 targets last year.

Panthers WR Robby Anderson is dealing with a hamstring "issue,” per beat writer Steve Reed. That news was passed down from HC Matt Rhule this morning. We’ll keep an eye out for an update on the severity and timetable for return. Anderson, 28, hasn’t missed a game since 2018.

Panthers HC Matt Rhule is “hoping” to “add some vertical element” to WR Robby Anderson’s game this season. That was Anderson’s forte across 4 years in New York, where his average depth of target ranged between 13.6 and 17.3 yards. Last year in Carolina, his tally stood at only 9.8 yards. “When you look at it, my game in New York was more down the field and vertical, but I didn’t have the intermediate opportunities,” Anderson said via the Charlotte Observer. “I think with Coach Rhule expressing that, and then you mix that with last year, I think that’s something to look forward to.” Anderson, coming off the board deep in WR3 territory, remains a value option in 2021 drafts.

The Panthers have agreed to a 2-year deal with WR Robby Anderson, according to Manish Mehta of the New York Daily News. Anderson -- who played under new HC Matt Rhule at Temple -- figures to start opposite D.J. Moore in Carolina's renovated offense. Curtis Samuel, meanwhile, could fit in the slot. Although Samuel spent a lot of time running downfield routes last season, he was a short-range playmaker as a RB/WR in college. He doesn't look like a top-36 fantasy WR heading into the season but has some upside. We'll be interested to see how the offense shakes out under Rhule and OC Joe Brady. Anderson leaves behind 96 targets (an 18.4% share) for the Jets to disperse.

Jets WR Robby Anderson (calf) is active for today’s game against the Bills. He was limited in practice all week, so don’t expect him to be operating at 100% today. Anderson’s matchup did get a boost, though, with CB Tre’Davious White deactivated.