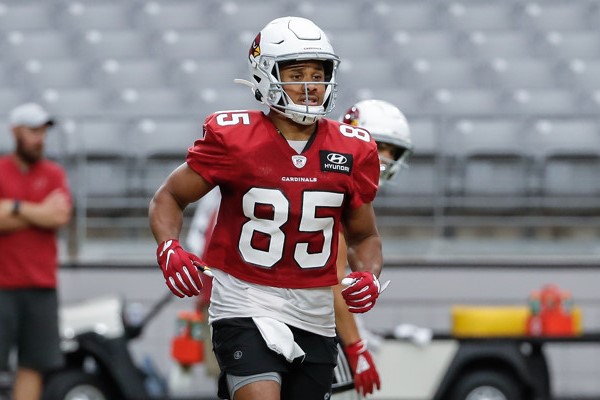 Moore wasn’t a fantasy factor as a rookie last season, playing a part-time role and seeing the vast majority of his targets near the line of scrimmage.

But there are reasons for optimism heading into year 2. WR Christian Kirk and Chase Edmonds are gone. And WR DeAndre Hopkins is suspended for the first 6 games of the season. Even with the arrival of WR Marquise Brown, there’s room for Moore to carve out a much bigger role in 2022. And HC Kliff Kingsbury has talked up a more diverse role for Moore this season.

There’s enticing upside here – and Moore figures to be available in the double-digit rounds of your fantasy drafts.

Cardinals WR Rondale Moore (hamstring) is out for Sunday's game vs. the Rams. He still hasn't practiced since hurting his hamstring on September 8. Greg Dortch gets another game as Arizona's slot receiver after totaling 11 catches on 13 targets over the past 2 weeks.

Cardinals WR Rondale Moore (hamstring) missed practice again on Thursday. Fantasy owners should plan to be without him for at least another week.

Cardinals WR Rondale Moore might miss “a few more weeks” with his hamstring injury, according to ESPN’s Jeremy Fowler. Arizona reportedly isn’t currently planning to place him on IR. WR Greg Dortch will carry upside as long as Moore is out.

Moore and Isabella out Week 2

Cardinals WR Rondale Moore (hamstring) is out for Sunday's game vs. the Raiders. He's yet to practice since injuring his hamstring 8 days ago. WR Andy Isabella (back) is also out for Week 2. Marquise Brown, Greg Dortch and A.J. Green will be Arizona's top 3 WRs vs. Vegas.

Moore served as a mere gadget player in 2021, generating a minuscule 1.4 average depth of target. That should change with Christian Kirk gone and DeAndre Hopkins suspended for the first 6 games. Moore looks best fit to take over the slot and work primarily in the short range, but he also has the speed to get downfield.