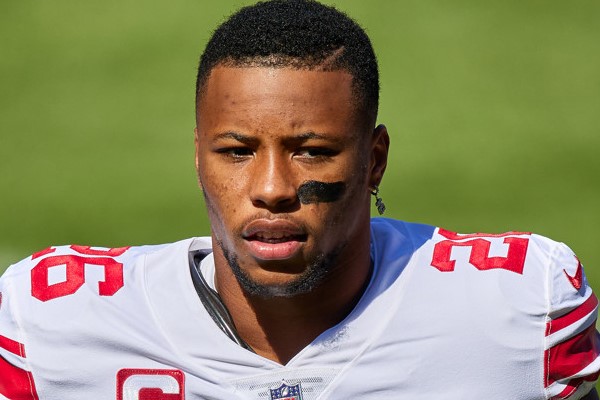 We all know about Barkley entering the league as an elite prospect (drafted 2nd overall) and leading the position in fantasy points as a rookie. It’s just gotten easy to overlook those facts because of 3 straight injury-inhibited campaigns. Barkley is finally healthy, though, and his rough stretch has fantasy drafters apprehensive. As of this writing, Barkley’s Underdog ADP still sits early in Round 3, at RB13. FFPC best-ball drafting has him at about the same spot, 14th among RBs. Interestingly, though, early Footballguys Players Championship drafts have bumped him a little – to RB11, in the middle of Round 2. The difference, that’s a lineup-setting format. Don’t be surprised if Barkley keeps getting nudged up the board as we get closer to the season. We’re ready to chase him all the way through Round 2, though. At full strength, Barkley presents as high a fantasy ceiling as anyone at the position (maybe excluding Christian McCaffrey).

The Giants have moved RB Saquon Barkley around the formation in OTAs. NJ.com's Zack Rosenblatt says that in addition to traditional RB routes, Barkley has "on numerous occasions" lined up as a receiver -- both in the slot and outside. It fits with what we (and Rosenblatt) expected to see from Barkley's role based on the words of new HC Brian Daboll. Rosenblatt also notes that Barkley is the healthiest he's been entering summer "maybe since his rookie year." There's big fantasy upside on the Giants' feature back

Beat writer Dan Duggan puts the odds of RB Saquon Barkley returning to the Giants in 2023 at 40%. Barkley, who enters a contract year, was the focus of offseason trade rumors. Duggan considers the franchise tag a potential “compromise option” next spring, but it’ll be costly ($13 million). Of course, Barkley’s 2021 performance will play some role in his future with New York. But we agree that he'll likely play elsewhere in 2023.

After listening to new Giants HC Brian Daboll speak at the NFL owners' meetings on Tuesday, insider Zack Rosenblatt came away believing that RB Saquon Barkley will be a bigger part of the passing game this season. "Saquon is a unique guy," Daboll said. "If you go back I’ve watched all of his tape all the way back from his rookie year when he had (91) catches. He’s a versatile player ... I’m excited to work with him.” After averaging 5.7 catches per game as a rookie, Barkley has sunk to 3.5 per game over the last 3 seasons. Look for that number to rebound this season, assuming good health for Barkley.

Giants GM Joe Schoen emphasized Monday from the NFL owners' meetings that he is "not shopping Saquon Barkley." The new GM drew headlines at the Scouting Combine by saying he'd listen to calls on all players. He acknowledged that "a couple of teams have reached out" on the veteran RB but added, "I haven't called one team about Saquon Barkley." It doesn't sound like we should expect Barkley to move this offseason. (We'll see whether that changes.)

It's been 2 straight injury-ruined seasons for Barkley. He's still only 25, but it's fair to wonder if all the lower-body injuries have sapped some of his explosion. A new coaching staff in New York can't hurt his chances of a bounce back in 2022.