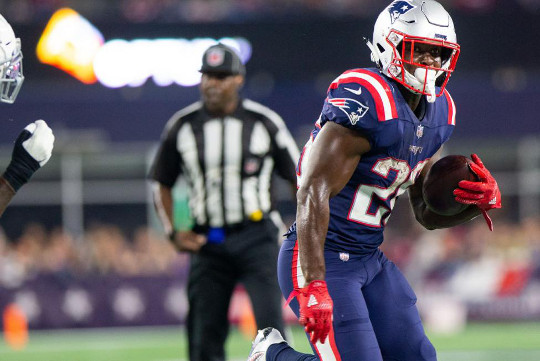 The math just doesn’t work out in Michel’s favor. Miami paid up for Chase Edmonds, while Raheem Mostert followed McDaniel from San Francisco.

Michel’s never been a big-time pass catcher, and Miami has a superior receiving back in Edmonds.

Mostert’s shaky durability adds some upside to Michel. But for now, the 27-year-old is just a late-round stash.

Chargers RB Sony Michel is a healthy scratch for today's game vs. the Cardinals. That leaves Isaiah Spiller and Joshua Kelley behind lead back Austin Ekeler.

Chargers RB Austin Ekeler caught just 2 passes for 17 yards in Sunday night's loss to the Chiefs, setting season lows in each category. But he carried a season-high 19 times for 83 yards (4.4 per rush) and a TD. It was Ekeler's 6th game among the past 7 with at least 1 rushing score. Isaiah Spiller followed him in the backfield, drawing 4 carries (11 yards) and 2 targets (2 catches, 11 yards) in roughly one-third of Ekeler's playing time. Sony Michel totaled just 5 snaps and converted a 3rd-and-1 with his only carry. The Chargers find positive rushing matchups each of the next 2 weeks -- but challenges beyond that -- according to our adjusted fantasy points allowed to RBs.

Chargers RB Austin Ekeler was added to the injury report and limited on Thursday with an abdomen issue. He spoke to reporters before the workout and made no mention of an injury, so it looks like this happened during Thursday's practice. We'll see what Ekeler does in Friday's practice and how he's listed on the final injury report. His absence vs. the Falcons this weekend would leave Sony Michel as Los Angeles' likely lead back, with rookie Isaiah Spiller the #2.

Sony Michel, RB UNS There is no dynasty data for this player.