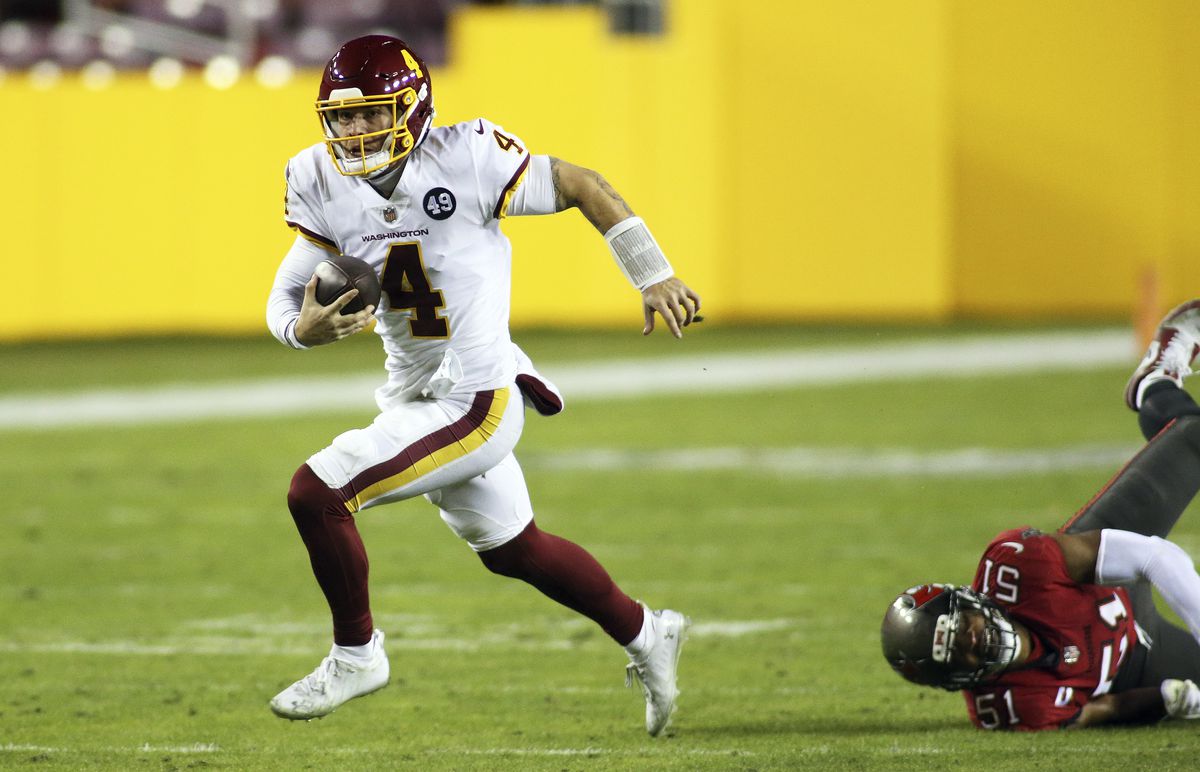 Week 7
Heinicke was awesome for fantasy owners in Sunday’s loss to Green Bay. Fueled by 95 rushing yards and 268-1-1 passing, the fill-in starter ranked as the QB5 for Week 7. Here’s the thing: Sunday could have turned up much better numbers. Heinicke had a rushing TD wiped out when refs determined he gave himself up just shy of the goal line. On the next play, he was stuffed on a sneak. Heinicke also had an end zone ball dropped by Terry McLaurin, who accounted for his lone TD on a long-range 50/50 pass. This one snapped a pair of down games for Heinicke, who very well could stick as Washington’s starter rest-of-way. He's just not worth holding in most fantasy leagues, as Washington goes to Denver before a Week 9 bye.
Week 5
Heinicke predictably struggled against a tough Saints defense in Week 5. The sledding gets much easier in Week 6 vs. a Chiefs defense that can't stop anything. Kansas City has allowed 29+ points in all 5 games so far this season and ranks bottom 5 in adjusted fantasy points allowed to QBs. Remember that Heinicke finished as a top 13 fantasy QB in 3 straight games prior to Week 5.
Week 4
After finishing as the QB10 in Week 2 and the QB11 in Week 3, Heinicke went off Sunday against Atlanta’s struggling defense. The fill-in starter tallied 290 yards and 3 scores on 23-of-33 passing. He added 43 yards on the ground. Logan Thomas went down early, but Heinicke repeatedly found success leaning on Terry McLaurin. The Week 5 matchup vs. New Orleans might be a challenge, but that’s followed with games vs. Kansas City and Green Bay. And the Saints are coming off allowing 402 yards to Daniel Jones in OT. So it might not wind up being a challenge.
Week 2
Heinicke showed out in his 3rd career start, defeating the Giants in impressive fashion. He threw for 336 yards and 2 TDs—including the game winner late in the game. He connected on 34-of-46 passes while hooking up with 7 different receivers—4 with at least 5 receptions. His favorite target was WR Terry McLaurin who put up a 6-60-1 stat line by halftime. Heinicke seemingly came of age late in the game with a money throw to backup TE Ricky Seals-Jones for an awesome TD to give Washington a lead late. He later drove WFT down for the game-winning FG as time expired. The big stage didn’t phase Heinicke one bit. In fact, this was nothing compared to his last start in the playoffs last year against QB Tom Brady. What was once thought to be a big dropoff from QB Ryan Fitzpatrick, Washington might have themselves a QB. He will be the main man again with a tougher matchup as Washington heads to Buffalo to take on a Bills D that blanked Miami last week.

The Panthers have placed QB Taylor Heinicke on IR with the left elbow injury he suffered in last week's loss to the Falcons. With QB Cam Newton (shoulder) on the shelf, QB Kyle Allen will start Sunday's finale against the Saints. The undrafted rookie went 4-for-4 in relief of Heinicke last week but isn't a Week 17 fantasy option.