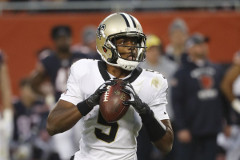 Week 14
Bridgewater completed 18 of 25 passes for 179 yards and 2 TDs in the Broncos' Week 14 win over the Lions.
Bridgewater was efficient and didn’t turn the ball over as the Broncos rush attack dominated. Teddy simply didn’t need to do much to get past the lowly Lions.
Bridgewater and the Broncos have a huge game against the Bengals in Week 15. He should only be used in 2-QB leagues.
Week 13
Bridgewater completed 22 of 40 passes for 257 yards, 1 TD and 2 INTs in Sunday’s loss to the Chiefs. He added 4 carries for 17 yards.
Bridgewater is simply a mediocre real-life and fantasy QB as he had a lot of his production in garbage time when the Broncos were down big.
Bridgewater had a terrible 25.5 QBR and 62.2 passer rating as he hardly completed 50% of his passes and was under a good amount of pressure from an aggressive Chiefs defense.
Bridgewater is only an option in 2-QB leagues as the Broncos are large home favorites against the Lions in Week 14.
Week 12
Bridgewater overcame a “severe” right shin bruise late in the 1st quarter of Sunday’s win over the Chargers. He left for the remainder of the 1st half but returned after halftime to close out the game. Bridgewater was clearly favoring the leg after returning to the game, but the Denver Post reports that HC Vic Fangio said the QB “looked fine” by Monday morning.

We’ll keep an eye on his status this week, but Bridgewater obviously isn’t much of a fantasy factor even at full health.

He did scramble for an 11-yard TD in the win over the Chargers. That marked the 1st time since Week 5, though, that he reached double-digit rushing yardage.
Week 9
Bridgewater completed 19 of 28 passes for 249 yards and a TD. He wasn’t intercepted, but he was sacked 4 times for 32 yards. His 3 carries totals minus-1 yard but 1 was a 1-yard dive while reaching the ball across the plane for a 30-0 lead in the 4th quarter. He controlled the ball. Denver’s time of possession was 41:12, even without really trying in the 4th quarter. The Broncos dominated Dallas even as Denver was losing players to injury. The pass offense was missing TEs Noah Fant (COVID) and Albert Okwuegbunam after an in-game knee injury.
Teddy has thrown a TD pass in 6 consecutive games for the 1st time since 2014. Extending that streak could depend on how an injury-riddled O-line can help him Sunday against the Eagles. Sacks could be a bigger problem. RG Graham Glasgow (fractured left ankle) will miss the remainder of the season and RT Bobby Massie (ankle) will miss a game or 2. Next up are the Eagles, who have allowed 5 QBs to complete 80% or more of their pass attempts. After hosting Philadelphia, most of the injured Broncos will have a Week 11 bye to prepare for the Chargers at home. Los Angeles ranks 2nd in the NFL in fewest passing yards allowed.
Week 7
Bridgewater was used heavily due to a negative game script on Thursday Night Football against the Browns. The Broncos trailed throughout the game and couldn’t get much done offensively. Bridgewater is nursing some lower-body injuries, which appears to be impacting his ability to move around.

He worked fairly efficiently in this game, completing 69.7% of passes. But bad weather and shaky play kept him from getting anything downfield. Bridgewater’s 2 passing TDs both went to RBs. He finished the game 23/33 for 187 yards, 2 TDs, and 1 INT, adding 2 rushes for 3 yards.

Bridgewater has now thrown for 2+ TDs in 5 of 7 games. However, he has also thrown 5 INTs over the last 3 weeks.

We have him ranked at QB18 this week against Washington, a defense that has given up 17 TD passes over the last 5 weeks. Jerry Jeudy’s return from IR this week can only help.
Week 6
Bridgewater completed 35 of 49 passes for 334 yards, 3 TDs and 3 INTs in Denver's 34-24 Week 6 blowout loss to the Raiders.
Teddy ended up with big numbers but was actually pretty horrible in this game as he was sacked 5 times and turned the ball over 3 times.
Bridgewater was able to pad his stats against a leaky secondary once the Broncos were trailing 31-10, throwing TD passes to Courtland Sutton, Noah Fant and Tim Patrick.
Bridgewater is only viable in 2-QB leagues. The Broncos have a short week as they travel to Cleveland to take on the Browns on Thursday Night Football.
Week 4
Bridgewater threw for 65 yards and a TD, completing 7 of his 16 attempts. These pedestrian numbers are due in large part to the QB being forced from the game at halftime due to a concussion.

It seems, at least as of now, that Drew Lock will start in Week 5. After taking over for Bridgewater, Lock completed 12 of 21 passes for 113 yards.

Bridgewater had been a serviceable option that most importantly facilitated fantasy points for his pass catchers. Lock can open this offense up but also provides a much lower floor.
Week 3
With Denver rolling 26 to 0 this week, Teddy Bridgewater’s 19-of-25 for 235 yards makes a ton of sense. He wasn’t asked to be aggressive with the ball or do too much. It was a run heavy game with a bit of passing mixed in.

This game featured his lowest passing yardage total and was the first time he failed to throw a passing TD. He had 2 TDs in each of the first 2 games.

Going forward, Bridgewater is an option in deeper formats or 2-QB leagues. He can be fine, but considering he will be down K.J. Hamler for the season and Jerry Jeudy for a few more weeks, his bevy of weapons is dwindling. Courtland Sutton, Noah Fant and Tim Patrick can be fine in plus matchups. But with a stellar Bronco defense, Bridgewater will be tasked with keeping the train on the tracks and not much more than that in the majority of contests.
Week 2
For the 2nd game in a row, the Broncos ran about 65+ plays and threw on just about half of them. Of course, playing with a lead again helped to keep the offense balanced, which allowed Bridgewater to be the most effective version of himself. With Jerry Jeudy out with an ankle injury, the QB leaned heavily on Courtland Sutton. Although they failed to connect on 2 big plays early, the chemistry came, and they accounted for almost half of the team’s passing yardage. Bridgewater also connected on TD passes to Noah Fant and Tim Patrick, but one of the missed connections to Sutton kept from adding a 3rd TD.
It's tough to complain about a start that has Bridgewater averaging 300 yards and 2 TDs. But playing with leads in both games has allowed him to play within himself. He also has excellent targets in Sutton and Fant, and hopefully before long, Jeudy, so the run after the catch ability they possess could help his weekly yardage totals despite moderate pass attempts. In addition, the offensive line is coached up very well by Mike Munchak, and the QB will likely have reliable protection to keep him from making too many mistakes.
Week 1
The Denver Bridgewater experience turned into a success after a Week 1 victory on the road against the Giants as the 7-year vet totaled 264 pass yards and 2 TDs on 28-of-36 passing. He connected with WR Tim Patrick for his first TD just before the half and followed up with a great 4th-down conversion pass to TE Albert Okwuegbunam that crippled the Giants’ hopes for a comeback — both of which required nifty footwork and great throws. Teddy hooked up with 9 different receivers, including 6 with at least 3 receptions. He looked most comfortable throwing to WR Jerry Jeudy and TE Noah Fant (6 receptions each). He also added 19 yards on the ground.
Bridgewater is never going to be a top-tier QB despite the talent around him, but he continues to serve well as a QB2 in most formats. There is nothing flashy with his play and he usually makes sound decisions, which keeps his floor fairly high. He has a tasty matchup this weekend against a Jaguars squad that just gave up 37 points to a bad Houston team.

Bridgewater and Drew Lock will duke it out for the Broncos’ starting QB job this summer. There’s no doubt that Bridgewater has been better as a pro so far. So if Lock doesn’t take a big step forward, Bridgewater should win the battle.

If he does, he’ll have some spot-start appeal thanks to Denver’s strong group of pass-catchers and some rushing ability.

The Broncos placed QB Teddy Bridgewater (concussion) on IR. It's confirmation that QB Drew Lock will start Saturday's finale vs. the Chiefs. Bridgewater is set to hit the free-agent market in March.

Bridgewater out for Week 17

Broncos QB Teddy Bridgewater (concussion) is out for Sunday’s game vs. the Chargers. Drew Lock gets another start but is a shaky QB2 in fantasy lineups.

Bridgewater out for Week 16

Broncos HC Vic Fangio confirmed on Wednesday that QB Teddy Bridgewater (concussion) is out for Sunday's game vs. the Raiders. QB Drew Lock will make his 1st start of the season in that one. The 3rd-year QB is the polar opposite of Bridgewater: big-armed, aggressive but inaccurate. We'll see exactly what Lock means for Denver's WRs, but we'd try to avoid Jerry Jeudy, Courtland Sutton and Tim Patrick in Week 16 fantasy lineups.

Broncos QB Teddy Bridgewater has been released from the hospital and is "doing well," the team announced. Bridgewater is in the concussion protocol for the 2nd time this season and is a long shot to play vs. the Raiders on Sunday. Look for QB Drew Lock to get the start in that one.

Broncos QB Teddy Bridgewater was stretchered off the field after taking a hard hit and landing on his head in the 3rd quarter of Sunday's game vs. the Bengals. We'll update his status when we know more. QB Drew Lock is in for Denver.