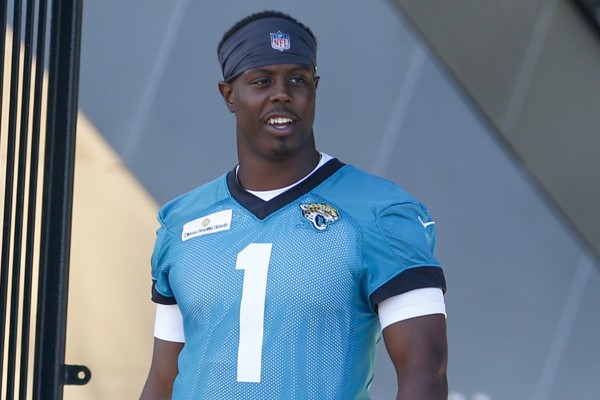 Etienne saw his workload dip in a double-digit loss to the Chiefs last time out. But that followed 3 straight games of 109+ yards and marked the 1st time since Week 4 that he fell short of 70 rushing yards. Baltimore's defense has been a tough draw lately, but the offense hasn't looked capable of taking the game away from Etienne.

Etienne (5’10, 205) exited college as one of the most productive backs in recent memory.

His rookie year was ruined by injury, but that Lisfranc issue (and subsequent surgery) at least occurred before the season. He's back healthy for the offseason program.

With an excellent receiving skill set, we’re looking to Etienne as a value RB2 -- especially in PPR. His early-season rushing workload might grow, too, depending on the status of James Robinson (Achilles).

Jaguars HC Doug Pederson said Monday that RB Travis Etienne (foot) was cleared to return to the Ravens game but that the team decided to play it safe and hold Etienne out. That's frustrating for fantasy players who were invested in Etienne yesterday -- but it at least sounds like he'll be fine for this coming weekend's game vs. the Lions.

Etienne expects to be fine for Week 13

Jaguars RB Travis Etienne was asked about his foot injury after Sunday's win over the Ravens and said, "we'll be straight for next week," according to insider John Shipley. Players, of course, tend to be optimistic about their injuries, so don't go locking Etienne into Week 13 fantasy lineups just yet. But it does sound like he avoided a significant injury. We should get another update on his status on Monday.

With RB Travis Etienne out for most of the game, JaMycal Hasty took over the lead role. He predictably struggled on the ground, gaining just 28 yards on 12 carries against a tough Ravens run D. Hasty caught all 5 of his targets for 67 yards, though, including a 28-yard score. Snoop Cooper operated as the 2nd RB -- 3 carries, 11 yards, 0 targets -- with newly acquired RB Darrell Henderson inactive. We'll see about Etienne's outlook for Week 13 (and beyond), as well as Henderson's role going forward.

Jaguars RB Travis Etienne suffered a left foot injury in the 1st quarter of Sunday's game vs. the Ravens. He headed back to the locker room with trainers and is officially questionable to return. We'll update Etienne's status when we know more. This is the same foot that Etienne injured last year.

Jaguars HC Doug Pederson said Friday that RB Darrell Henderson won't be ready to play this weekend vs. the Ravens. Henderson was just claimed by Jacksonville on Wednesday. He could eventually win the #2 RB job, but it'll be JaMycal Hasty in that spot behind Travis Etienne for at least 1 more game.

Etienne's rookie season was wiped out by an August Lisfranc tear in his left foot. He should be fine for 2022, though, and remains an exciting-looking prospect as both a runner and pass-catcher. This Jaguars offense is capable of taking a big step forward with Urban Meyer out of the way.