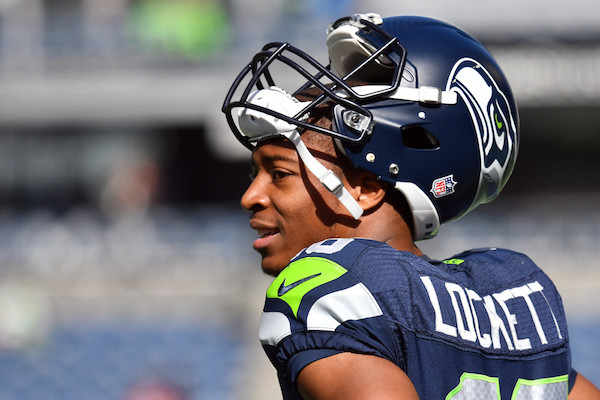 Lockett matched D.K. Metcalf's 4 targets among Geno Smith's 17 attempts in relief last Thursday night. This should remain a concentrated pass offense, even with the QB change. And it's tough to bet on Seattle carrying a lead at Pittsburgh, which would push pass volume.

Week 5
The loss of Russell Wilson will probably be felt more by Lockett than D.K. Metcalf as Lockett and Wilson seem to just have a unique connection. It wasn’t like Lockett took a major backseat once Geno Smith entered the game as he did see 4 targets of his own in the 4th quarter. The issue is Lockett only caught 1 of those 4 targets for just 7 yards. Things should look better for Lockett as Smith will get a full week of practice with the 1st team offense. This should lead to more productive days for Lockett with Smith.
In Week 6, we should be cautiously optimistic for Lockett as he does draw a plus matchup vs. the Steelers. However, until we see the connection on the field it might be best to view Lockett as a WR3/flex.
Week 2
Lockett has started this season as one of the hottest receivers in the game. Through Week 2, Lockett leads the NFL in every deep receiving category, proving once again to be one of the best deep threats in the game. A ridiculous 44% of his targets are 20+ yards and he’s produced 81 more yards than the next highest player (Tyreek Hill) in deep receiving yards. As D.K. Metcalf continues to demand attention on the other side, there isn’t much a defense can do to stop both of these players on a weekly basis.
Heading into Week 3 Lockett should continue his hot streak as he gets a Vikings D that is hurting at outside CB opposite of Patrick Peterson. The Vikings have been beat by speed, giving up big games to Ja’Marr Chase and Rondale Moore so far in 2021. This makes Lockett a candidate for your DFS lineups again in Week 3.
Week 1
D.K. Metcalf and Tyler Lockett remain the 1a and 1b in this offense and it is not close. The best part about this duo is they can each put up fantasy points in the same week as they are the clear focal points. On a day that Russell Wilson only threw the ball 23 times, both Lockett and Metcalf got it done. Both players finished with at least 14 fantasy points in half PPR and secured at least 60 yards and a score on the week. Lockett led the way, exploding for 100 yards and 2 TDs. Metcalf did lead the team in routes and ran a route on every Wilson drop back.
This week the Seahawks will play the Titans, who just allowed the second most points to WRs in Week 1 with the Cardinals WRs scoring 57 fantasy points. This matchup makes both D.K. Metcalf and Tyler Lockett must-start players and DFS plays in Week 2.

Lockett has finished as a top 16 WR across fantasy scoring formats in 3 straight seasons. That includes a WR8 PPR and WR11 non-PPR finish last year.

Lockett and QB Russell Wilson’s production dipped over the 2nd half of last season, which is a slight concern. But we’re betting on a bounce back for both guys considering their histories.

Be prepared for weekly volatility from Lockett. But he’s a great WR3 and can even work as your WR2.

Seahawks WR Tyler Lockett (hip) is active for today’s game vs. the 49ers. He was limited in Wednesday's practice, sidelined on Thursday but a full participant on Friday. There have been no reports about a limited role for Lockett today.

Seahawks WR Tyler Lockett (hip) is expected to play vs. the 49ers today, according to ESPN's Adam Schefter. Lockett was limited in Wednesday's practice, sidelined on Thursday and then a full participant on Friday. He carries a bit more risk than usual but remains a high-upside fantasy play.

Seahawks WR Tyler Lockett (hip) is listed as questionable for this weekend's game vs. the 49ers. He was limited in Wednesday's practice, sidelined on Thursday and then a full participant on Friday. That points to Lockett playing on Sunday, but you'll need to check back that morning to make sure that's the case.

Seahawks WR Tyler Lockett (hip) did not practice on Thursday. That followed a limited practice on Wednesday. So Lockett either suffered a setback or got Thursday off. We'll have a better idea of his Week 4 status when Seattle's final injury report comes out Friday afternoon.

Seahawks WR Tyler Lockett got in a limited practice on Wednesday. He's on the injury report with a hip, rather than the knee it looked like he injured late in last week's loss to the Vikings. Regardless, Lockett seems to be on track to play vs. the 49ers this weekend.