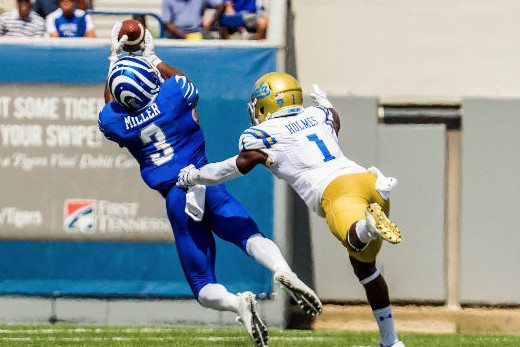 A foot injury prevented Miller from testing at the Combine. We’ll see if he’s able to work out at Memphis’ Pro Day on April 6.

Miller was 1 of the most productive WRs in the country over the past 2 seasons. He broke out in 2016, finishing 10th nationwide in catches, 9th in receiving yards and 9th in TDs. He set Memphis records in all 3 categories. (The catch and yardage records were previously held by 4-time Pro Bowler Isaac Bruce.) Miller topped 100 yards in 8 of 13 games, including a school record 250 yards against Tulsa.

His efficiency was just as impressive as the raw production. Miller posted a 64% catch rate and 15.2 yards per catch. His 3.47 yards per route run ranked 4th among all draft-eligible WRs, according to Pro Football Focus.

Here’s how those marks stack up against the other WRs we’ve looked at so far:

Not bad for a walk-on. Miller didn’t receive a single scholarship offer out of high school. He was redshirted in 2013 and then missed the entire 2014 season with a shoulder injury. Miller flashed with a trio of 100+ yard outings in 2015, finishing 2nd on the team in yards and 1st in TDs.

Miller brings an exciting combination of downfield and after-the-catch ability. He's explosive off the snap with plenty of deep speed to get behind the defense.

At just 5'11 and without an elite vertical, Miller isn’t dominant in jump-ball situations. But he does display excellent concentration to come down with off-target throws and contested balls.

Miller also did a ton of damage after the catch at Memphis, combining acceleration and speed with excellent balance to bounce off would-be tacklers. He averaged 6.9 yards after the catch per reception across 3 college seasons.

Pro Football Focus charged Miller with an 11.1% drop rate in 2017 — 94th among 133 qualifying WRs. But I didn't see any cause for concern in the 5 games I watched. In fact, Miller’s hands look rather sticky.

Miller was also position-versatile for the Tigers. I saw him line up out wide, in the slot and even in the backfield. Per Pro Football Focus, Miller saw one-third of his targets from the slot last year and ranked 6th in the country with 3.43 yards per route run.

Miller boasts 1 of the most impressive production profiles in this year’s WR class -- both in terms of raw numbers and market share. He also passes the eye test, displaying a nice combination of acceleration, speed and ball skills. Miller lined up all over the formation at Memphis and flashed the ability to win both after the catch and downfield. His tape is just as good as any WR in this draft class.

There are some holes in his resume. He's on the smallish side at 5’11, 201 pounds, and we don't have any athletics testing numbers from him yet. (Hopefully he's able to work out at Memphis’ Pro Day.)

It's worth noting, too, that Miller faced lesser competition playing in the American Athletic Conference. But he also had very little trouble against “Power 5” schools throughout his 3-year career.

Miller's profile isn’t without some warts. But in a WR class lacking truly elite prospects, he could certainly find himself near the top of the dynasty rankings. We’ll see if we get measurables on him at his Pro Day — and then how high he goes in the NFL Draft.