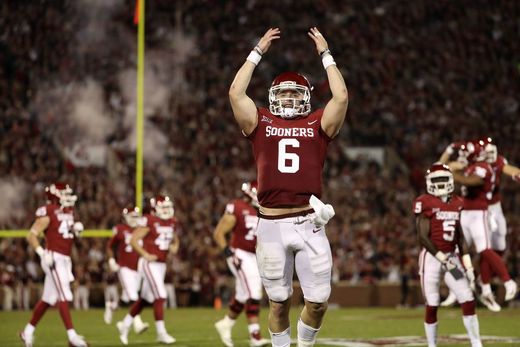 Betting against this guy hasn’t won much money so far.

After high school, Mayfield got scholarship offers from Florida Atlantic, New Mexico, Rice and Washington State. But the native Texan wasn’t satisfied and instead opted to walk on at Texas Tech. All he did there was beat out heralded (and scholarshipped) recruit Davis Webb for the Week 1 starting job after sophomore Michael Brewer went down.

Mayfield proved solid but hurt his right knee on Oct. 5 and turned the job over to Webb. He transferred to Oklahoma after the season, blaming miscommunication with the Red Raiders coaching staff.

After sitting out a year, Mayfield immediately took over as the Sooners starter and finished 3 straight seasons among the top 4 in Heisman Trophy voting. That, of course, culminated in his 2017 victory -- to go along with the Maxwell Award and the Davey O’Brien Award (top QB).

That season saw Mayfield break his own record (from 2016) for passing efficiency. It also followed a February arrest for public intoxication and fleeing/resisting arrest, which undoubtedly has potential NFL suitors combing his personal history even more diligently.

If you’re an NFL talent evaluator, then it can be tough to find a lot of the stuff you likely need to see in Mayfield’s tape. You’ll come across a lot of open receivers, plenty of quick passing, almost exclusively shotgun formations and ample spreads.

The stock reaction to that, of course, is that he’ll need to get comfy with pro-style offenses quickly. But more NFL offenses continue to add spread concepts swiped from college playbooks. Chicago just hired a former college coach with no NFL experience as OC. Cris Collinsworth spent 42% of the Super Bowl talking about “RPOs” -- from a team with barely mobile Nick Foles behind center. (Percentage might be fabricated.)

Mayfield will definitely show you inconsistent footwork, but also the arm strength to make up for it and the mobility to keep plays alive.

Here’s an example of the escapability and arm strength from last season’s clash with Ohio State (which went for naught when the receiver dropped the pass).

Here’s another example from 2015 -- his 1st year at Oklahoma -- against a Clemson defense that ranked among the nation’s toughest.

Mayfield can also easily let fly on a deep ball, while on the move, with the willingness to take a chance against coverage.

Mayfield got lucky with a dubious PI call on that play, and the willingness to try such throws can drive coaches mad when they produce turnovers. But we fantasy players are much more interested in the opportunity for big yards and TDs created by such attempts than we are worried about INTs. He has also proved good on downfield throws, completing 53% of passes 21+ yards downfield over the past 2 seasons.

And if the Sooners QB doesn't find an open receiver while escaping pressure, he sports enough agility and burst to convert the play himself.

If Mayfield stood 6’4 and handed the ball quietly to a ref every time he scored a TD, he’d be a shoo-in for the top spot in April’s NFL Draft. But he stands 6 feet and five-eighths of an inch, brings the on-field persona of J.J. Reddick and got caught on tape trying (unsuccessfully) to outrun the cops.

The height question is the only 1 that kinda matters here. Since the AFL-NFL merger in 1970, there have been 318 total QB seasons of 500+ pass attempts. Just 34 of those have come from passers 6’1 or shorter. In that same span, there have been 231 QB seasons of 244.3+ fantasy points (according to Pro Football Reference), which marks the bottom of QB2 territory over the past 3 years. Of those 231 campaigns, 34 have come from QBs 6’1 or shorter.

The league likes its QBs tall. But it also currently sports the 2 most dominant “short” fantasy passers.

Drew Brees supplied 12 of those 34 worthwhile short-guy fantasy seasons. He also built an athletic profile quite similar to Mayfield’s back at the 2001 NFL Scouting Combine.

Russell Wilson has also posted another 6 of those big seasons by little QBs, despite standing even less than 6 feet. Wilson runs faster than Brees and Mayfield, but guess who comes up as his closest athletic comparison on PlayerProfiler. (Spoiler: It’s Brees.)

Mayfield will obviously have some learning to do on his footwork and plenty of other aspects as he enters the NFL. But if some team drafts him in the top half of Round 1 -- which appears likely -- then consider it a clear sign that they’re betting on the talent, proven production, football smarts and leadership potential over any height concerns. Brees, for what it’s worth, lasted until Round 2 in the draft. And then San Diego allowed him to walk at the end of his rookie deal. Wilson, of course, didn’t come off the board until Round 3.

We’ll see where Mayfield and the rest of this year’s QBs land, but he could very quickly start looking like Russell Wilson and stands as the early favorite to lead the QBs in our dynasty rookie rankings. In the right landing spot, Mayfield has the look of a perennial top-12 contender among fantasy QBs.