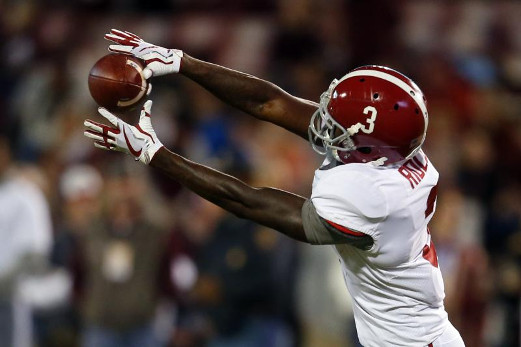 Ridley arrived at Tuscaloosa as a consensus 5-star recruit and the #1 WR prospect according to ESPN, Rivals and 247Sports. He made an immediate impact.

So his 2016 was relatively disappointing. Ridley lost more action to Stewart and Howard, actually trailing the former in both receiving yards and TDs. (Stewart, of course, went on to be a 3rd-round pick of the Jets and caught just 6 balls as a rookie.) After topping 80 yards in 3 of his first 5 outings, Ridley hit that mark in just 1 of his final 10. He was held under 45 yards in 8 of those contests.

While Alabama’s passing game wasn’t quite as busy or effective in 2016 as 2015, Ridley’s slice of the pie shrunk. Check out his share of the receptions, receiving yards and TDs:

Ridley bounced back nicely in 2017. Despite finishing with a career-low 63 receptions, he nearly reached the 1,000-yard mark thanks to a personal-best 15.3 yards per catch. Fifteen of his grabs went for 20+ yards, including big gains of 63, 66 and 78.

Ridley was easily Alabama’s most reliable WR. He posted a 63.6% catch rate, while all other Tide wideouts combined to corral just 52.0% of their targets. Per Pro Football Focus, Ridley’s 3.11 yards per route run last season ranked 10th among all FBS draft-eligible WRs.

He also set career highs in market share of receptions and receiving yards (although his share of TDs was a career low):

Ridley wins with speed and quickness. His short-area explosion and acceleration out of breaks helps him create big separation on short and intermediate routes.

Those same assets make Ridley a weapon after the catch. Alabama often used him on WR screens and jet sweeps to get him the ball in space. Ridley averaged 6.2 yards after the reception for his career, according to Pro Football Focus.

Ridley flashes good-but-not-elite deep speed. When he wins downfield, it’s often with that acceleration and an ability to gain leverage on his defender through route running.

(This ends up incomplete but is still a nice display of hands, body control and at least the awareness that he’s right up against the sideline.)

While Ridley showed good hands on those plays, I also saw a couple of drops in the 5 games I watched. Pro Football Focus charged Ridley with a 10% drop rate in 2017 — 146th among draft-eligible WRs.

Back to the positives: Ridley lined up both outside the numbers and in the slot for the Tide and showed the willingness and ability to make plays in traffic across the middle of the field.

Ridley is seemingly built for today’s NFL, which emphasizes the short passing game and WRs who create separation and pick up yards after the catch. That’s not to say he’s a Julian Edelman or Jarvis Landry type, though. Ridley can make plays downfield.

I think some combination of Doug Baldwin and T.Y. Hilton is a good comp for his game. (Both guys underwhelmed at the Combine, like Ridley.) And like those guys, I wouldn’t be surprised to see Ridley run the majority of his routes from the slot as a pro.

He also figures to have draft capital on his side as a projected 1st-round pick. That doesn’t guarantee success, of course. But it does give him an inside track for an immediate and significant role in his NFL offense.

The biggest concerns with Ridley are “on paper.” After a wildly successful freshman campaign, he was relatively disappointing as a sophomore. He bounced back this past season, but his raw production and market share numbers were far from elite.

Then there’s the Combine performance. Ridley posted nice times in the 40-yard dash and 3-cone but was sub-10th percentile in the vertical, broad and 20-yard shuttle. He registered a SPARQ (athleticism) score in the 7th percentile among NFL WRs.

Consider, too, that Ridley is already 23 — extremely old for an incoming rookie. He was actually ineligible after the first 3 games of his senior year in high school because he was too old.

Combine the bottom-barrel athleticism with the advanced age, and it’s tough to get excited about Ridley’s upside. He’s a relatively polished prospect (he better be at that age!) and seems capable of contributing rather quickly as a secondary option for his NFL club. But I’d bet against him developing into a true alpha WR.