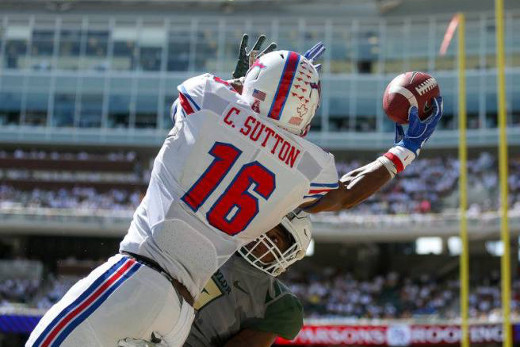 Sutton was recruited to Southern Methodist as a safety and appeared in just 2 games in 2014 before receiving a medical redshirt.

He moved full-time to WR in 2015 and made an immediate impact. Sutton easily led the Mustangs in all major receiving categories, accounting for 24.3% of the team’s receptions, 33.0% of the receiving yards and 47.4% of the receiving TDs. He was named to USA Today’s Freshman All-America team and to the Biletnikoff Award Watch List.

Sutton took a big leap forward in 2016. He ranked 20th in the country in receiving yards, while also cracking the top 30 in catches and TDs. His market-share numbers were even better than the previous year: 30.6% of the catches, 39.3% of the receiving yards and 45.5% of the TDs.

Sutton recorded 3 multi-TD games and 5 outings of 100+ yards, including an SMU-record 252 yards against South Florida.

Heading into 2017, Sutton was named a preseason candidate for both the Biletnikoff Award and Heisman. But he fell short of those lofty expectations.

Sutton is a big dude who simply out-sized a lot of the college DBs he faced.

I came away from this tape review a tad underwhelmed, though. Sutton lost in contested situations too often for a man of his stature. He also has a tendency to get his hands on DBs at the top of his routes. He was flagged for 2 offensive pass interference penalties in the 5 games I watched and had this obvious push-off on a comeback route that was somehow missed.

Sutton isn’t particularly explosive off the snap — not surprising for a 6’3, 218-pounder. But he does have enough build-up speed, coupled with that frame, to be a downfield threat.

While he won’t make many highlight reels with his open-field skills, Sutton does have some nuanced make-you-miss ability. He was used on WR screens quite often in 2017.

Pro Football Focus charged Sutton with a middling 9.0% drop rate this past season. The 3 drops I saw were of the concentration variety; he turned his head upfield to run before securing the ball. Sutton flashes the ability to snatch the ball when it’s outside his frame …

… But I’d like to see him be less of a body-catcher on more on-target throws.

You can’t teach size — and Sutton certainly has it. He also boasts a promising production profile, despite a relatively disappointing 2017. And he tested far better than I expected at the Combine, especially considering his size. Sutton earned a SPARQ score in the 86th percentile among NFL WRs.

There’s work to do here, though. Sutton doesn’t always take full advantage of his frame and will need to expand and tighten up his route running (he ran primarily comebacks, crossers and ‘go’ routes at SMU).

He’s much more project than finished product. He might make an early impact in the red zone, but I think it’ll be a year or 2 before Sutton reaches his ceiling.

How high does that ceiling climb? Think Alshon Jeffery territory. A guy who can combine a big yards per catch with strong TD production to flirt with WR1 numbers.

In a WR class without much upside, that’ll land Sutton near the top of our pre-draft rankings.