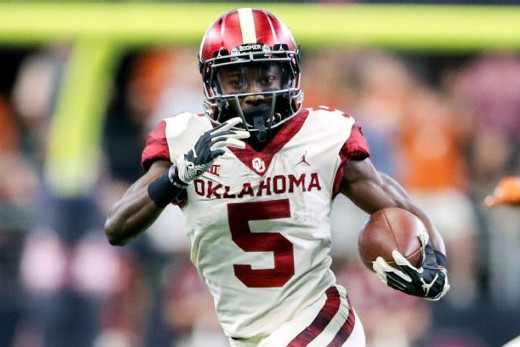 Brown was unable to work out at the Combine or Oklahoma’s Pro Day after undergoing surgery to repair a Lisfranc injury on January 8.

Cousin of Antonio Brown, Marquise started his college career at College of the Canyons in California. He led that squad with 50 receptions, 754 yards and 10 TDs as a freshman, adding 2 more scores in the return game.

Brown then chose Oklahoma over offers from USC, Tennessee and TCU, among others. Good move. He caught passes from Baker Mayfield in 2017 and Kyler Murray this past season, playing on Sooner teams that ranked 1st and 4th in passing yards.

Brown grabbed a big chunk of that production, though. He led Oklahoma in receiving yards in his debut season, finishing 2nd to TE Mark Andrews in catches and TDs. Brown’s market shares: 18.4% of the catches, 21.6% of the yards and 14.9% of the scores.

Andrews’ departure this past season paved the way for Brown to emerge as the Sooners' clear top dog. He boosted his raw numbers and market shares across the board. Brown soaked up 27.4% of the team’s receptions, 29.2% of the receiving yards and 23.3% of the TDs. Those marks rank 15th, 24th and 36th among the 48 WRs invited to the Combine.

Brown’s 12.4 yards per target ranked 5th among 25 of this year’s top WR prospects. That's a strong number even considering the prolific passing attack he played in. The rest of Oklahoma’s pass-catchers averaged 10.9 yards per target. Per Pro Football Focus, Brown’s 3.56 yards per route run ranked 4th among all draft-eligible WRs.

He possesses a different gear than pretty much everyone else on the field. If he gets a step on a defender, he’s gone. And he does damage after the catch by out-running angles.

If Brown can’t run by a defender in the open field, he can make him miss with some shake and bake.

He wasn’t asked to run a wide variety of routes at Oklahoma but flashed the ability to separate with his change-of-direction and acceleration out of breaks. He’s especially good on routes working back to his QB after defenders have backed off to respect Brown’s speed.

Brown ran mostly from the outside in 2017 but got more work in the slot this past season. According to Pro Football Focus, he hauled in 32 of 41 targets for 633 yards and 8 TDs from the inside. He easily led all draft-eligible WRs with a massive 7.45 yards per route run from the slot.

It would have been nice to have seen Brown run the 40-yard dash at the Combine, but it’s obvious that his speed will translate to the next level. He should make an immediate impact as a big-play threat both downfield and after the catch.

Size is the question. Brown is just 5’9 with an 8th percentile wingspan. And we’ve seen very few sub-170-pound WRs have success in the NFL. Only 3 such guys have reached 800 receiving yards.

Now, if we expand our filter to WRs at or under 175 pounds, we get 24 different guys who have gone for 800+ yards. So Brown seems to be right on the border of a viable weight — and it’s certainly possible he packs on 8-10 pounds in an NFL weight room.

Still, he’d definitely benefit from landing with a creative offensive mind who understand how to get Brown into space and maximize his skill set. Think Tyreek Hill’s role with Andy Reid and the Chiefs.

We’ll see who nabs Brown this spring, but he looks like a risk/reward pick in dynasty drafts with the ceiling of a Hill or DeSean Jackson.