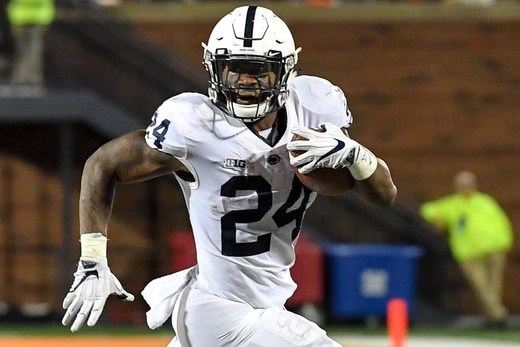 (percentile rank among all RBs at Combine since 1999, courtesy of mockdraftable.com):

Sanders brought plenty of hype with him to Penn State. He earned Pennsylvania Mr. Football honors for 2015 and arrived as a top-25 recruit nationally. Unfortunately for him, the Nittany Lions already had a bigger star at his position.

Saquon Barkley dominated backfield touches over Sanders’ 1st 2 seasons. Sanders’ 25 carries as a freshman actually fell just 4 short of the team’s #2 RB in the category. Sanders served as Penn State’s lead kick returner that season but showed no special ability in that area. His 20.8 yards per return ranked just 9th in the conference, and Barkley took the lead job there for 2017.

In his sophomore campaign, Sanders’ 31 carries trailed only Barkley among PSU backs but ranked a distant 3rd on the team. (QB Trace McSorley topped 140 carries in each of his 3 starting seasons.)

Sanders’ 98.0 rushing yards per game last season ranked a decent 12th among the 27 HBs invited to the Scouting Combine and matched up with his #12 ranking among the group in carries per game.

If you’re looking for a flashy runner, then don’t bother searching for Sanders games. He didn’t spend 2018 racking up highlight-reel plays.

He did, however, spend his lone starting campaign running efficiently and often picking up more than the O-line created for him.

And this freakin’ run against Michigan State just speaks for itself …

For the season, Sanders gained 322 yards after contact on the 81 carries where contact found him at or behind the line of scrimmage, according to Pro Football Focus. Among 96 RBs with at least 60 such carries, Sanders accumulated the 7th-most yards.

Sanders’ game speed doesn’t even seem to match up with his strong Combine 40 time yet. He doesn’t blow past defenders the way some speed backs might. But he’s capable of working to a crease and then making you pay …

Sanders’ agility and short-area explosiveness match up better with his testing in the broad jump and agility drills than his game speed does with his 40. He’s at his best juking tacklers at the 2nd level and is adept at jump-cutting to find holes in the backfield.

Sanders could stand to be a little less patient at times, hitting what’s there instead of waiting for something to develop. That figures to be especially important in the NFL, where everyone will be moving even faster.

In blitz pickup, he’s at least a willing contributor with experience … and apparently a strong work ethic and desire to improve.

Sanders isn’t an exciting prospect, but he’s a somewhat sneaky solid player. The question for his rookie-draft valuation will be whether he stays at all sneaky after a strong Combine workout.

His top 10 player comps on Mockdraftable constitute 1 of the more interesting lists of results I’ve seen on there -- both because of the names and the strength of the matches. Here they are with their draft year, percentage match and NFL Draft round:

Jackson and both Joneses turned out to be disappointments vs. where they were drafted. Choice flashed early for the Cowboys but never turned into more than a role player. Williams -- the #5 overall pick -- got off to a nice start before injuries quickly got in the way. None of the other guys accomplished much

Sanders isn't any of these players, obviously. But it's worth noting how closely he aligns with them athletically. Many players in the Mockdraftable database don't have a top match with as strong a score as the last guy on Sanders' list.

What Sanders has that most of these guys missed is that he's entering a league with a lot more committee backfields. If Sanders lands in the right spot in Round 3 or 4, starts with a decent role and is allowed to develop, he has the tools to become a backfield leader (probably not a workhorse).