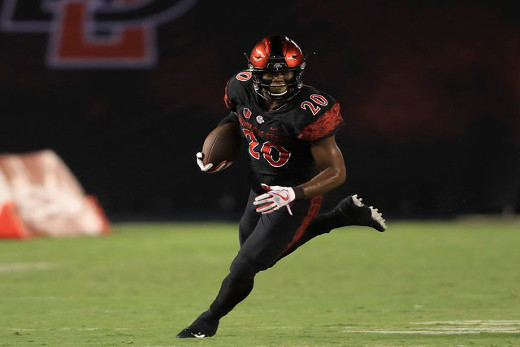 As the numbers show, Penny and efficiency go hand and hand. He exits San Diego State with a massive 7.5 YPC.

But it wasn’t until his senior year that he saw workhorse carries. Donnel Pumphrey — Philly’s 2017 4th-round pick — led SDSU with 349 carries in 2016, 309 in 2015 and 276 in 2014. That it took Penny so long to truly emerge might seem troubling. His dynamic senior season should quell those concerns, though.

Penny’s 2,248 yards led the NCAA and set a school record. Among draft-eligible backs, he sat #1 in Pro Football Focus’ Elusive Rating, a nod to his tackle-dodging talent. Penny also finished 1st with 3.32 YPC when hit at or behind the LOS (min. 100 attempts).

If there’s a flaw in Penny’s game, it’s a limited pass-catching résumé. The 22-year-old caught just 42 balls for his career — although those opportunities were maximized with 11.4 yards per catch and 6 TDs. Pass protection remains a work in progress.

Finally, we have to consider the quality of competition Penny faced. In 2017, only 3 of his opponents (Northern Illinois, Fresno State and Boise State) ranked top-25 in YPC allowed. The 9 others ranked 72nd or worse. Perhaps that’s one reason why a non-Power 5 RB hasn’t been drafted in the 1st two rounds since Doug Martin (Round 1) in 2012. Penny's popularly mocked as a Round 2 selection.

Can he follow in the footsteps of Kareem Hunt and David Johnson, a pair of Round 3 picks? Let’s take a peak.

It's easy to see Penny as a goal line factor in the pros. His 23 TDs ranked 2nd in the nation last year.

While Power is the calling card, Penny can also take runs wide and break defenders down in space.

Penny blazed a 4.46 forty-time at the NFL Combine. We see some of that burst and long speed here on an 81-yard TD.

This winter, Penny described his style as a mix of Arian Foster and Ezekiel Elliott. Penny's tape does indeed show plenty of power runs that contain the vision and burst to maximize yardage.

The former Aztec has established that he can handle a massive load. He's built to withstand punishment and carries a clean medical history to the pros.

While he could improve as a pass protector, Penny's complete profile gives him the look of Round 2 draft pick. He's a top-5 rusher in this loaded class and a clear candidate for year-1 fantasy value.