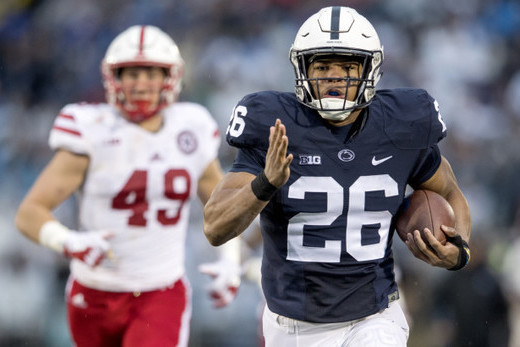 (Percentile rank among all RBs at Combine since 1999, courtesy of Mockdraftable.com.)

He set the Penn State freshman record for rushing yards in 2015, en route to earning 2nd-team All-Big Ten honors. And Barkley did that despite missing 2 games with an ankle injury. That breakthrough debut included 194 yards against an Ohio State defense that allowed the 8th-fewest yards per carry in the nation.

Barkley continued to build as a sophomore. He nabbed Big Ten Offensive Player of the Year while ranking 9th in FBS in rushing attempts, 14th in rushing yards and tied for 6th in rushing scores. Barkley reached 100 rushing yards in just 5 of 14 games that season but hit 190+ in 3 of those. He also scored in 12 of 14 outings, including 4 receiving TDs.

Barkley’s workload dipped in 2017. He tied for 31st in carries and ranked 28th in FBS in rushing yards but tied for 9th in ground scores. Barkley still accounted for 81.3% of his team’s RB carries and 81.5% of the RB rushing yards. He also tied for 2nd on the team in receptions, accounting for a 17.9% share of the Penn State total.

The Nittany Lions appeared to limit his work on purpose, handing their star the ball 20+ times in just 3 of 13 games. Barkley reached 100 yards on the ground just 5 times but hit 190 in 3 of those games. He finished just 3 of 13 contests shy of 4.5 yards per carry while topping 6.2 in 6 others. He further displaying his playmaking ability with 28.4-yard average and 2 TDs on kick returns.

Be honest. Did you really click into this article looking for a straight evaluation of this guy? If so, then sorry. That just didn’t feel necessary.

Here’s what 1 NFL GM told NFL.com’s Lance Zierlein: “You don’t screw up the special ones when you are a talent evaluator. This guy is special. Any concerns you file on him just feels like nitpicking to fill out the report.”

Zierlein went ahead and filled out that part of his report with stuff about how Barkley will need to improve as a “north-south” runner in the pros … and then named Barry Sanders as his top comparison. I’d take a RB with the same main “flaw” as that guy.

There’s really no point in me nitpicking Barkley. The only question on his pro outlook appears to be how early any RB is actually worth drafting.

So for the study on Barkley, I watched his 4 worst games in yards per carry from 2017 -- just to see what went wrong. And it was a lot of getting hit in the backfield.

I counted 16 times among 21 carries against Ohio State that Barkley met defenders at or behind the line. Of the 44 yards he did manage under those conditions, 36 came on this TD run that reminded viewers what he can do if you create a little space:

Oh yeah, and Barkley also took the opening kick 97 yards for a TD in that game.

That’s 1 yard shorter than his TD return to open the Indiana game, in which Barkley couldn’t find room to log a run longer than 8 yards among his 20 attempts. The Hoosiers, by the way, weren’t rushing doormats last season. They ranked 40th among 130 FBS defenses in yards per carry allowed (3.9). That marked 1 of 2 games all year in which Barkley didn’t score.

The other came on a soggy field at Michigan State. Barkley met contact from Spartans at or behind the line of scrimmage on 6 of 14 runs that day. But he showed willingness to pass-protect by putting an MSU blitzer on his back and receiving ability with an early 1st-down conversion catch-and-run on a drag route from the slot.

Barkley also displayed some downfield receiving ability against Rutgers, concentrating through contact on this reception …

And, of course, there’s the main attraction: what he’s capable of creating when you actually give him some space on a running play …

Of course, there are always surprise busts. But you have no reason to believe this guy will be the next.

The consensus top back followed his strong college production and tape by kicking the NFL Scouting Combine square in the butt. Check his list of comparable players on Mockdraftable.com, and you’ll see some uninspiring names of RBs we all owned in fantasy for 3 weeks at various points -- led by dynasty cult hero Cedric Peerman. But realize that only 1 player on that list makes for an 80+% match. Ezekiel Elliott, by comparison, had 4 comps above 86%.

And so does more traditional grading. NFL.com grades Barkley a 7.45, tying Notre Dame G Quenton Nelson for the top spot in this year’s class. Leonard Fournette led RBs at 6.8 last year. Elliott paced the 2016 class at 7.0. Todd Gurley earned a 6.3. I’d go back further, but their current grading system only dates back to 2014.

Combine Barkley with the weak class at WR, and there’s really no question about whether he should lead your dynasty rookie drafts. Like with the NFL version, whether you should take Barkley there, trade down to gain picks or build a package to chase him will depend on the stud RBs specific value to your roster.

We’ll see where Barkley lands before we dig too deeply into his 2018 redraft value, but he sure appears to be headed for workhorse-back territory in this NFL Draft. Six RBs have been drafted among the top 10 players over the past 10 years. Four of those guys averaged at least 17.5 carries per game as rookies. The other 2 were Christian McCaffrey (80 receptions) and C.J. Spiller (oops).