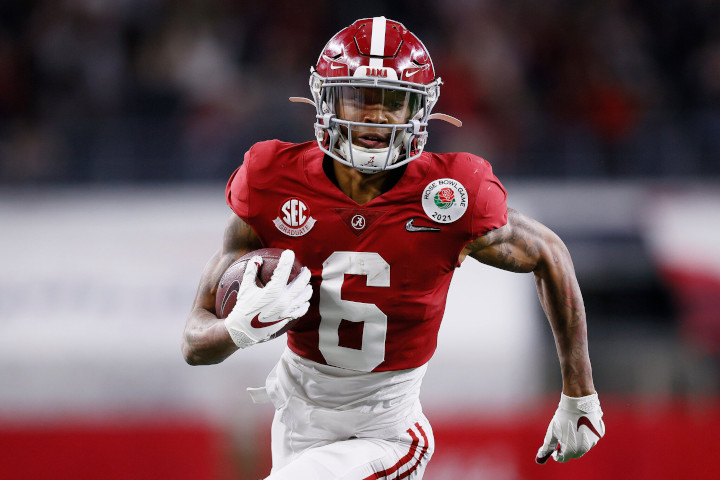 It’d be an injustice to start anywhere but Smith’s historic 2020 campaign. His 1,856 yards set an SEC record and are the 6th most in NCAA history. The 23 TDs are also an SEC record and rank 5th all-time. Smith’s 117 grabs land him 24th in the record books. 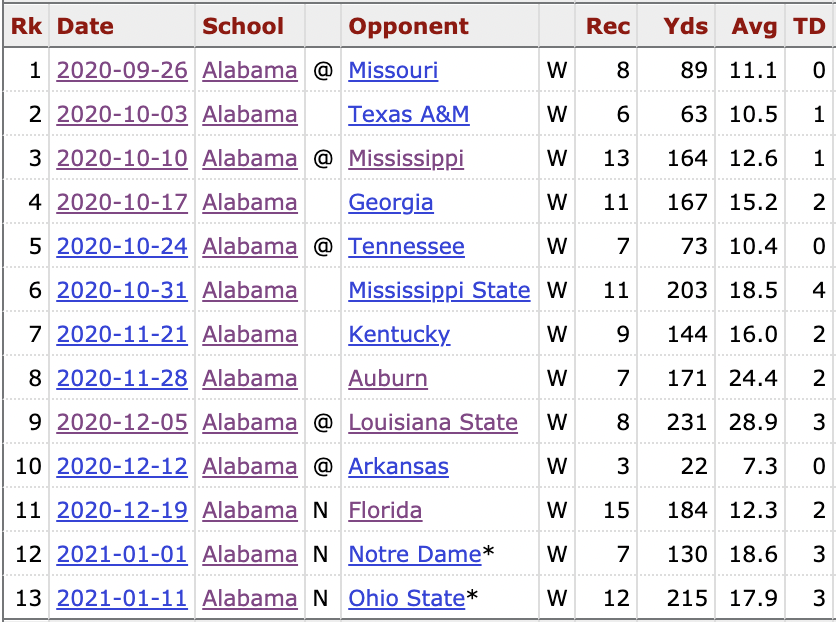 He finished the season with huge market shares: 36.1% of the receptions, 39.9% of the receiving yards and 54.8% of the TDs. Ridiculous marks at a loaded program like Alabama.

It’s certainly worth noting that teammate, fellow 2021 prospect and likely top-15 pick Jaylen Waddle was only healthy for the first 4 games of last season, which undoubtedly boosted Smith’s shares. But Smith still averaged 9.5 catches, 120.8 yards and 1 TD over those 4 games with Waddle, accounting for 40% of the receptions, 30.7% of the yards and 33.3% of the TDs.

Smith averaged an other-worldly 12.8 yards per target and 4.39 yards per route run last year. The latter mark ranks 2nd best among 17 of this class’ top WR prospects, behind only Western Michigan’s D’Wayne Eskridge, who was obviously facing much weaker competition. Smith was named a unanimous All-American, won the Biletnikoff Award given to the nation’s top WR and became the first WR to win the Heisman since Desmond Howard back in 1991.

Of course, all of that came as a 21-year-old senior. But Smith is not some one-hit wonder.

His 2019 campaign was nearly as impressive as last year’s. The numbers weren’t as big -- but they came alongside a pair of 2020 1st-round picks in Jerry Jeudy and Henry Ruggs, plus a healthy Waddle. Smith led that stacked squad with 1,256 yards and 14 TDs, ranking 2nd to only Jeudy with 68 catches. His 18.5 yards per catch beat Jeudy and Waddle and trailed Ruggs by just .2. Smith was named a Second-Team All-American and a Biletnikoff Award semifinalist.

As a sophomore in 2018, Smith ranked 5th on the team in all major receiving categories, behind Jeudy, Ruggs, Waddle and TE Irv Smith. He was mostly quiet as a true freshman but did catch a game-winning 41-yard TD in overtime of the National Championship.

Smith arrived at Alabama as a 5-star recruit and a top 10 WR in the class.

This kid is a true joy to watch. Sick releases, silky smooth routes, speed for days and uncanny balls skills.

He wins at all 3 levels of the field.

Smooth route-running leads to easy separation in the intermediate game:

And even when he doesn’t create huge separation, Smith still makes plays. He has a wide catch radius thanks to his long arms and leaping ability.

He also wins in contested situations with body control, concentration and vice-grip hands.

Smith isn’t quite as dominant after the catch. He’s not a big tackle-breaker or make-you-miss guy, instead relying on burst and speed to beat defenders’ angles. He averaged a nice 8.2 yards after the catch in 2020.

If you’re gonna slow Smith down, you need to get hands on him at the line of scrimmage. He can struggle vs. press and is sometimes bodied off his routes

Frankly, though, college CBs were rarely able to get a piece of Smith at the snap because of his quickness and release package.

He primarily lined up at the ‘X’ receiver spot for the Tide but also played 28% of his snaps in the slot over the past 2 seasons.

If you don’t think Smith puts big check marks in the “production” and “tape” boxes, I’m not sure what to tell you. So let’s move on to the biggest (and most valid) concern about his NFL projection: His weight.

Smith falls into that 2nd group, with a BMI somewhere between 22 and 23. That’s worrisome based on Drew’s work. Only 37% of “Betas” drafted in the 1st round have recorded a WR2 season; 26% have recorded a WR1 season. The corresponding numbers for 1st-round “Alphas”: 55% and 41%.

So Smith’s weight certainly adds risk to his fantasy profile. He’ll be facing bigger, stronger CBs at the next level. Maybe that means he won’t be as dominant in contested situations. He might have more trouble against press coverage.

But Smith is also 6’1 and long, with a 78.5-inch wingspan that lands him in the 72nd percentile among NFL WRs. To be frank, we haven’t seen a guy with his body type.

It’s all a little scary. But it’s less scary when we get back to his production profile and tape. He dominated SEC competition for the past 2 years. And it’s tough to imagine him not being able to get open in the NFL with his athleticism, release package and route-running ability.

Smith also figures to have draft capital on his side. He’s expected to be a top-10 pick.

Smith falls short of checking in as a flawless, can’t-miss prospect. But he’s not someone I’ll be betting against.