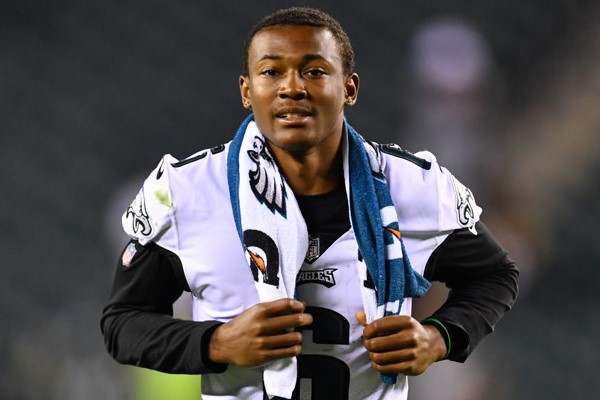 A.J. Brown arrives as the more accomplished NFL WR, and the Eagles spent quite a bit to get him (1st-round pick + $100 million extension). But we have 3 seasons of Brown (a former 2nd-round pick) vs. just 1 of Smith, whom Philly moved up to draft 10th overall just a year ago. So it’s a little early to judge which will be the better NFL player. The point: Although we’re projecting him to do so, none of us can say with certainty that Brown will beat Smith in targets this season. Their respective ADPs, on the other hand, say that drafters are absolutely sure of it. Brown is going 11th among WRs in FFPC best-ball drafting vs. Smith at WR34. Underdog ADP has Brown at WR10 (inside Round 2) vs. Smith at WR36 (at the Round 6-7 turn). Both are priced ahead of where we project them. Between the 2, though, Smith carries less risk at draft cost.

Eagles HC Nick Sirianni called WR DeVonta Smith “a number 1 WR” on Thursday. No surprise there, as Philadelphia just took Smith 10th overall. Sirianni praised Smith’s hands, competitiveness and ability to win 1 on 1s. While his 2021 usage proved inconsistent, Smith ultimately finished with a promising 103-64-916-5 line in 17 games. He's coming off the board as a high-end WR3 in early 2022 fantasy drafts.

The Washington at Philadelphia game originally scheduled for Sunday has been moved to Tuesday at 7 pm ET due to The Football Team's COVID outbreak, insider Albert Breer reports. This game won't be on the DFS main slate but will still count for Week 15 in season-long leagues. We'll see if any of Washington's players currently on the COVID list are activated by Tuesday. The extra 2 days can't hurt Eagles QB Jalen Hurts, who is recovering from what's been reported as a high-ankle sprain. Washington WR Terry McLaurin and RB J.D. McKissic will have a better chance to clear concussion protocol before kickoff.

The Eagles released WR Travis Fulgham. It's not a major surprise if you've been paying attention to preseason usage. DeVonta Smith, Jalen Reagor and Quez Watkins will open the season as Philly's top 3 WRs.

Smith back at practice

Eagles WR DeVonta Smith (knee) was back on the practice field on Monday. Beat writers noted that he only went through individual drills, so he still seems limited. But the rookie is clearly on track to be fine for Week 1 and still has a good chance to open the season as Philly's #1 WR.

The Eagles have upgraded WR DeVonta Smith from "week to week" to "day to day" on their injury report, according to Dave Zangaro of NBC Sports Philadelphia. Smith was reportedly running sprints on a side field with a trainer, helmet on, during the team's Saturday practice. It sounds like he's close to returning from his knee sprain -- with nearly a month still to go before the regular-season opener. Now looks like a good time to take some shots at a lower-priced Smith in fantasy football drafts.

The Slim Reaper made it through his rookie campaign unscathed and earned a solid 21% target share. We'd like to see that number climb, especially in an offense that looks poised to lean run as long as Jalen Hurts is behind center. But that won't be easy with the arrival of A.J. Brown.