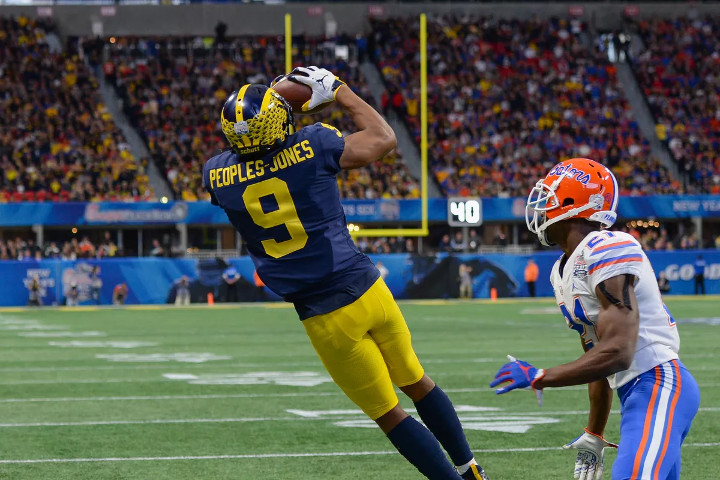 DPJ’s Michigan career can only be classified as a disappointment.

A ballyhooed prospect, Peoples-Jones posted a 60-1,071-17 receiving line as a high school senior and was tabbed the 2016 Michigan Gatorade Player of the Year, a top-5 WR in his class and a 5-star recruit. He chose to play his college ball for the hometown Wolverines over at least 23 other offers, including from Ohio State, Florida and Florida State.

Peoples-Jones carved out a significant role as a true freshman, finishing 3rd on his team in catches and 4th in receiving yards.

His numbers climbed across the board in his sophomore season. DPJ led Michigan in catches and receiving scores but finished 2nd to fellow sophomore WR Nico Collins in receiving yards. It’s certainly worth noting that the 2018 Wolverines ranked just 80th in passing yards and 48th in TDs. So Peoples-Jones’ market shares — 21.1% of the receptions, 21.8% of the receiving yards and 33.3% of the TDs — were more impressive than his raw production.

2019 was a step in the wrong direction. DPJ missed the first 2 games of the season with a right foot injury. But his per-game numbers sunk across the board. Peoples-Jones ranked 3rd on the team in catches and receiving yards. And his market shares underwhelm even omitting the 2 games he missed: 18.0% of the receptions, 15.6% of the yards and 27.3% of the TDs. Those marks rank 22nd, 24th and 18th among 24 of this year’s top WR prospects. He also ranked 23rd in that group in yards per route run.

We can’t get into DPJ’s tape before mentioning that he earned a 99th percentile SPARQ score with his Combine performance. He’s truly an elite athlete. And you see it on film.

Peoples-Jones has the speed to run by DBs.

He has a cat-quick release and the movement skills to create space at the top of his routes.

You want ball skills? Yeah, DPJ has those. He can go up and high-point the football and also shows excellent body control on back-shoulder throws.

I was disappointed by DPJ’s after-catch ability. Per Pro Football Focus, he forced just 4 missed tackles and averaged a subpar 5.3 yards after the catch last year. He should be better considering his size and athleticism.

If we’re trusting the process, we can’t rank a guy with Peoples-Jones’ production profile too highly in this deep WR class. Yes, Michigan’s QB play was shoddy the past 3 seasons. But that’s why we use market shares. And DPJ’s 2019 was disappointing even from that standpoint.

But it’s also fair to be excited about the ceiling on a former 5-star recruit who tested as a 99th percentile athlete. Especially considering the tape. DPJ plays like a freak athlete and also displays solid route-running ability and strong ball skills.

I’ll be interested to see what kind of draft capital he commands. If he slides into Day 3, we’ll need to tap the breaks. But if Peoples-Jones comes off the board in the 2nd or 3rd round, he’ll be 1 of the more intriguing WRs in dynasty rookie drafts.