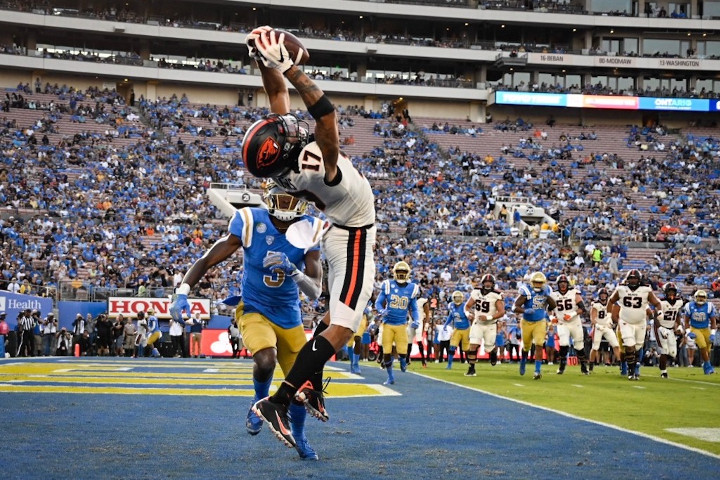 Hodgins’ 2019 campaign ranks near the top of this year’s WR class. The raw numbers placed him 12th in the country in catches, 18th in yards and 7th in TDs. That’s more impressive when you consider Oregon State ranked just 53rd in completions, 58th in passing yards and 23rd in TDs.

Hodgins easily led the Beavers in all major receiving categories, accounting for a whopping 33.1% of the catches, 38.3% of the yards and 43.3% of the TDs. Those marks rank 3rd, 3rd and 4th among 23 of this year’s top WR prospects. His 2.69 yards per route run ranked 10th — just ahead of LSU’s Justin Jefferson.

That followed a solid sophomore campaign that saw Hodgins lead his team in catches and receiving yards and rank 2nd in TDs. His market shares: 22.8% of the receptions, 29.3% of the yards and 29.4% of the scores.

Hodgins arrived to campus as a consensus 4-star recruit and a top-25 WR in the class according to multiple scouting services. He finished 2nd on the team in catches, 4th in receiving yards and tied for 2nd in TDs as a freshman.

Hodgins is a fairly easy evaluation. He’s a long, lanky receiver who wins at the catch point.

At 6’4 with 82nd percentile arm length, Hodgins boasts a large catch radius. He has the body control to adjust to off-target passes. And his hands are excellent. Pro Football Focus charted Hodgins with just 3 drops on 179 catchable targets over the past 3 seasons — a sterling 1.7% drop rate.

Hodgins also shows the willingness and ability to make grabs in traffic. His 67.4% contested-catch conversion rate over the last 2 seasons led the entire nation, according to PFF.

There’s tons of tape of Hodgins in contested situations, though, because he’s not a big separation creator. I saw him work free on double moves on a couple of occasions …

… But he just doesn’t have the change-of-direction ability or burst to consistently create space from CBs.

Hodgins is also close to a zero after the catch. He forced just 7 missed tackles and averaged 3.4 yards after the catch this past year, according to PFF. Both marks placed him outside the top 150 in the country.

The big question with Hodgins is whether he’ll be able to create enough separation to earn targets as a pro. Or if he doesn’t, will his QB be willing to throw him those 50/50 balls?

His size, ball skills and hands should translate to the next level, though. And he puts a big checkmark in the ‘college production’ box.

We’ll see where he lands in the NFL Draft, but we might be highlighting Hodgins’ name as a late-round sleeper in dynasty rookie drafts.