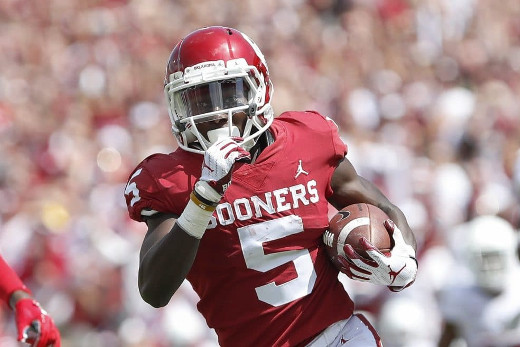 The Giants use some of their league-high 12 picks to move up and grab the guy many consider the best player in this draft.

GM Mike Mayock uses his 1st of 3 first-round picks on an interior disruptor.

The Bucs are reportedly smitten with White, who can step right in for the departed Kwon Alexander.

The Jets struck out on Anthony Barr in free agency. They get a guy here who might turn out to be even better.

GM Bob Quinn and HC Matt Patricia both hail from New England, where the Patriots offense long leaned on a dominant 3-down TE.

A 44-game starter at ‘Bama, Williams would be an instant upgrade to Buffalo’s O-line.

After finally moving on from HC Marvin Lewis, the Bengals get ready to make a change at QB. There’s no dead cap money left on Andy Dalton’s contract.

The Giants trade up again — this time ahead of the QB-needy Dolphins and Redskins — to get their guy.

New HC Brian Flores gets a big 6’3, 315-pounder for the middle of his defense.

The ‘Skins might be the team most likely to leave the 1st round with 1 of the top 4 QBs. They’re reportedly highest on Dwayne Haskins and Lock.

It’s unclear if Ford will settle in as a guard or tackle, but he’ll help protect Cam Newton and pave running lanes for Christian McCaffrey regardless.

The Texans are desperate for offensive line help after allowing a league-high 62 sacks last season. Many view Dillard as the top pass protector in this class.

The uber-athletic Lindstrom (97th percentile SPARQ) is a perfect fit for the Vikings, who are transitioning to a zone-blocking scheme under assistant head coach Gary Kubiak.

The 2019 Ted Hendricks Award winner (nation’s top DE) racked up 21 sacks and 38 tackles for loss over the past 2 seasons.

The Steelers have seemingly been needy in the secondary forever. The team is “in love with Williams,” according to The Athletic’s Mark Kaboly.

Gary boasts elite athleticism but totaled just 9.5 sacks across 3 college seasons and has a shoulder injury that will eventually require surgery. So he looks like a potential faller on draft night. But the ‘Hawks scoop him up here as they look to bolster the pass rush after trading away Frank Clark.

After trading down twice, the Packers still nab a seam-stretching TE for Aaron Rodgers.

The addition of free-agent Isaiah Crowell won’t stop the Raiders from adding this big, 3-down back.

An enlarged heart discovered at the Combine reportedly has him completely off some teams’ boards. But if the Eagles’ medical staff is comfortable with the condition, Sweat would be a steal here.

A 2016 video of him punching a woman and a February torn ACL will cause a guy who many view as a top-10 player in this class to drop.

The Raiders use their 3rd and final 1st-rounder to address a pass defense that tied for dead last in yards allowed per attempt last year.

The college RT might need to kick inside as a pro. But the Chargers could use help at both spots.

Savage began his college career as a CB before moving to safety. He could be a Week 1 starter at nickel CB or FS for Seattle.

Only 3 teams allowed more sacks than the Packers last year.

The Rams find an immediate replacement for John Sullivan.

Lawrence is the type of big, versatile defender that Bill Belichick loves.