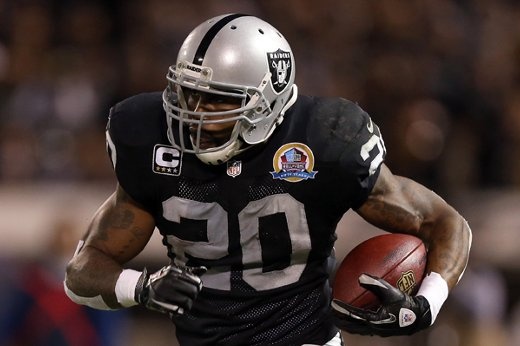 Vick was officially named Philly’s starter after out-playing Nick Foles in training camp and preseason action.  He’s still not a good bet to play 16 games, but the combination of HC Chip Kelly’s up-tempo offense and Vick’s athleticism will give him QB1 upside whenever he’s on the field.

So evidently, a broken-thumbed Gabbert is Jacksonville’s best option at QB.  Ouch.  Gabbert suffered a hairline fracture in his throwing thumb last weekend but was named the starting QB just a couple of days later.  Continue to avoid him in fantasy drafts.

Williams continues to climb our rankings as Jonathan Stewart looks less likely to be ready for Week 1.  D-Will is a good bet for 15+ touches per game as long as J-Stew is sidelined.  He made our Last Call for Sleepers list.

It looks like Arian Foster will be ready for Week 1.  But it’s tough to imagine him stepping into a full workload after missing almost the entire offseason.  Tate could be a RB3 or flex option early this season.  And Foster remains a major injury risk.  If he goes down, Tate would become a must-start.

Richardson was tabbed the Week 1 starter by HC Jeff Fisher.  But in the same breath, Fisher strongly hinted at a committee attack.  "Well, from a starting standpoint, yeah, I think Daryl would probably take the first snap against Arizona," he said.  Richardson is likely looking at 12-15 touches per game, making him a RB3 or flex for your fantasy team.

He continues to run ahead of rookie Montee Ball.  Hillman’s goal-line fumble in last weekend’s preseason game didn’t help his cause, but Ball blew a blitz pickup in that same game.  We’re eager to see how both guys do in Saturday night’s all-important 3rd exhibition.

Miami is serious about giving Thomas a chance to win the lead job.  He out-played Lamar Miller in the team’s 3rd preseason game, ripping off 25 yards on 4 carries.  We still like Miller to eventually win out here, but Thomas might at least open the season with a significant role.

It doesn’t look like Mike Goodson will be available to the Jets – at least early this season.  That has Powell sitting #2 on the depth chart behind an unproven, injury-prone starter.  Powell is a mediocre talent but is worth stashing on fantasy benches.

That would be Isaac Redman, Jonathan Dwyer, La’Rod Stephens-Howling and the newly acquired Felix Jones.  The quartet will make up Pittsburgh’s backfield as long as Le’Veon Bell is sidelined.  It’ll be a full-blown committee attack behind a shaky offensive line.  We don't recommend starting any of these guys on your fantasy team.

He’s been a standout all offseason.  But Thompkins’ most impressive performance so far came in New England’s 3rd preseason game.  He racked up 8 catches for 116 yards.  Six of those grabs came from Tom Brady, who targeted the rookie 8 times in 1 half of action.  Thompkins will enter the season as the Patriots’ #2 WR – and a potential WR3 for your fantasy squad.

He was activated from the PUP on Friday, which at least means the Jets expect him to contribute by Week 6.  Holmes remains just a late-round bench stash in fantasy, but he’s capable of re-emerging as at least a WR3 if healthy.

We’ve admittedly been sleeping on Roberts a bit this summer.  Despite sitting #3 on the depth chart, Roberts could still be a fantasy asset on Arizona’s promising passing attack.

Jags veterans named this guy the team’s most impressive rookie.  Undersized but explosive, Sanders has drawn comparisons to Tavon Austin.  He’ll open the season among Jacksonville’s top 3 WRs.  That won’t be enough to make him a fantasy option, but he’s worth monitoring (and stashing in dynasty leagues).

Dickson returned to practice after missing a couple weeks with a slight hamstring tear.  He should be ready for Week 1 and is an intriguing TE2 as Baltimore’s starter.

Sudfeld continues to climb our rankings.  With Rob Gronkowski doubtful for Week 1 – and likely out at least a few more games beyond that – Sudfeld could be a starting option for your fantasy squad early on.  And it sounds like he’ll play a significant role even after Gronk returns.

Clay will get the 1st crack at replacing Dustin Keller as the starting TE.  Clay has just 34 catches through his 1st 2 NFL seasons, although he's averaged 13.1 yards per and scored 5 times.  We've always been intrigued by his playmaking ability at the position, but it's tough to imagine him emerging as a reliable fantasy option this year.  TEs Dion Sims and Michael Egnew will also see action for the Fins.

The Bills released Rian Lindell and will hand the starting job to Hopkins.  An unproven rookie on a rebuilding offense, he’s not a recommended fantasy option.

Manuel got just a slight bump down our rankings because of minor knee surgery.  He’ll miss the rest of the preseason and is considered questionable for Week 1.  We still like him to take over as Buffalo’s starter by the end of September.  Manuel’s rushing ability could make him a sneaky QB2.

Henne lost out to Blaine Gabbert for the starting job.  We’re still expecting to see Henne under center at some point.  But even then, he won’t be much of a fantasy option.

The news was mixed for Foster this week.  It started with a report that he’d received an injection on Aug. 9 to help alleviate back pain that had spread to his legs.  But the week ended with Foster finally being activated from the PUP list.  He’s now on track to play Week 1 but remains a massive injury risk.  We’re still avoiding him in the 1st round of fantasy drafts.

It’s been a rough preseason for McFadden.  He averaged just 2.8 yards per carry in his first 2 outings and then sat out the 3rd with a shoulder injury.  We still like McFadden's skill set, plus the fact that he'll be the focal point of Oakland's offense.  On the downside, he doesn't figure to find much running room behind a piss-poor offensive line and with defenses keying on him.  We moved McFadden from high-end RB2 to low-end RB2 in our rankings.

As insider Armando Salguero writes, the starting job “was Miller’s to lose.  And he’s slowly doing just that.”  Miller has lost a fumble and committed an ugly drop this preseason.  Now he’s in a legit battle with Daniel Thomas for the starting job.  We still like Miller to come out on top, but he might open the season in a timeshare.

Bell went down with a Lisfranc injury in last Monday’s preseason game.  He’ll avoid surgery for now and could be back within 6-8 weeks.  The best-case scenario has him returning in late September.  But it remains to be seen how he’ll perform after an injury that sometimes takes a full year to recover from.  Bell is just a later-round bench stash in fantasy drafts.

It’s looking more and more like Ball will open the season in a committee with Ronnie Hillman.  And Ball might actually be the 1B to Hillman’s 1A.  The rookie’s role should grow over the course of the year, but he’ll open as just a RB3 or flex.

While the Panthers are holding out hope that Stewart will be ready for Week 1, that’s looking extremely unlikely at this point.  He’s yet to get back on the field since undergoing offseason surgery on both ankles.  HC Ron Rivera admitted that Stewart could open the season on the PUP list.  He's meeting with Dr. Robert Anderson next week for a check-up.  We should get another update on his status then.  For now, consider Stewart just a late-round bench stash in fantasy football.

Franklin will likely open the season as the Packers’ #3 RB behind Eddie Lacy and DuJuan Harris.  His biggest impact will come in the return game.  He’s just a late-round flier in your fantasy draft.

Goodson has yet to report to the team after his offseason legal troubles.  He won’t make an early-season impact and might not play at all this year.

Dunbar went down with a sprained foot in last weekend’s preseason game.  He was slapped with a 3-4 week timetable, which makes him questionable for Week 1.  Dunbar was looking like the favorite to open the season as Dallas’ #2 RB, but rookie Joseph Randle might now pass him.

Wright sprained his knee in last Saturday’s preseason game.  He has a chance to be ready for Week 1, but the missed time might impact his early-season role.  We won’t recommend starting him in fantasy at the beginning of the season.

We can pretty much rule Gronk out for Week 1.  A mid-September return seems like the best-case scenario at this point, and there’s still a chance he hits the PUP list.  If we were sure Gronk would be 100% for even 10 games, he’d still sit 2nd in our TE rankings.  But we’re skeptical about how he’ll fare after that back surgery.  We moved him down to 5th at the position.

Keller is done for the season after suffering a devastating knee injury in last weekend’s preseason game.  Keller tore his ACL, MCL and PCL and dislocated his kneecap.  He’ll hit the free-agent market this offseason with major health concerns.

The Cardinals brought in former Dolphins K Dan Carpenter this week.  He’ll battle with Feely for the starting job.  Avoid the situation in upcoming fantasy drafts.

Tynes is out indefinitely after undergoing toe surgery this week to treat a MRSA infection.  Newly signed Rian Lindell will open the season as Tampa's K.