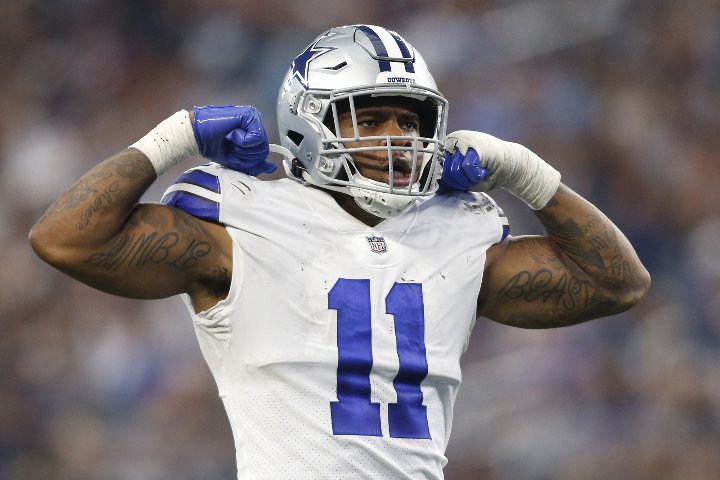 The Cowboys encountered a mini-disaster among their edge-rushing group back in Week 2.

That’s when Demarcus Lawrence broke his left foot in practice, and Randy Gregory landed on the COVID list. Suddenly left without both DE starters, Dallas turned to rookie LB Micah Parsons. And he delivered.

Parsons spent 72 of his 76 snaps at DE over weeks 2 and 3 and racked up 12 total pressures, according to Pro Football Focus.

The rookie has continued playing some edge snaps each week since. So when Gregory went down with a calf injury ahead of Dallas’ Week 10 meeting with the Falcons, it seemed fair to wonder whether Parsons would shift back to the line. He did not.

That’s good news for IDP managers, as it keeps Parsons in his best role for tackle collection. And he has delivered 6+ solos in 3 straight games. Parsons probably would have done even better in that category against Atlanta, but Dallas whipped the Falcons so soundly that most starters got a break.

And Parsons has remained a key pass rusher regardless of where he’s aligned. He has 3.5 sacks and 5 QB hits over his past 3 games.

The rookie has become a must-start for most IDP rosters.

So what about DE, where Dallas will miss Gregory for at least 2 more games and we still don’t know when Lawrence will return? Week 10 found Tarell Basham (74%) and Dorance Armstrong (70%) leading the way, with Chauncey Golston (57%) and Azur Kamara (19% and no relation to Alvin Kamara) mixing in.

Basham has gotten the more consistent playing time between them, but Armstrong significantly outplayed him vs. Atlanta. Unfortunately for him, this week’s matchup with Kansas City hasn’t been kind to DL scoring.

With Montez Sweat out and Chase Young leaving early, James Smith-Williams led WFT DEs at 79% playing time vs. the Bucs last week. Casey Toohill followed at 60%. Shaka Toney (19%) & Bunmi Rotimi (17%) round out the fun-named crew. All but Rotimi are speed-score winners, rating 85th percentile or higher for the position in that category. There could be some deep-league upside to Smith-Williams and Toohill for this week’s matchup with Carolina.

Slot CB Nate Hobbs gets an upside matchup with Tyler Boyd and the Bengals this week. Here’s his weekly playing time for the year:

DE Frank Clark played a season-low 67% of snaps vs. the Raiders on Sunday night. His previous 6 appearances:

LB Krys Barnes saw his playing time fall back down to 43% vs. the Seahawks after spiking to 64% and 65% the previous 2 games.

After climbing to 7 and 8 pass-rushing opportunities in weeks 6 and 7 (per Pro Football Focus), S Jamal Adams has seen just 3 each of the past 2 weeks. Those shifts align with DE Darrell Taylor leaving early, missing a game, then returning for the past 2 games.

Adams is also questionable for this week’s game against Arizona.

LB Baron Browning entered last Sunday's game with a back injury and left it early after tweaking it (25% snap share). Kenny Young played 97%. Curtis Robinson got 61%. The bye comes at a good time for the rookie.

Smith is back this week, casting Bynum out of Week 11 relevance. But he’ll be a name worth keeping in mind in dynasty this offseason. Xavier Woods, the other starting safety, is on a 1-year deal. Bynum also played corner in college.

S Budda Baker got normal playing time (95%) despite entering the Carolina game questionable. He’s questionable once again this week but expected to play.

He gets upside matchups with Seattle this week and Chicago next.

DE Brian Burns played through his questionable tag for 69% snap share vs. Arizona but delivered an empty stat line outside of 1 QB hit. I blame Mac Jones.

LB Devin White finally broke through for his 1st 2 sacks of the season Sunday vs. Washington. But the breakthrough has been coming. His 12 QB hits through 9 games sit just 4 short of his 2020 season total.

With David Long and Rashaan Evans out, LB Jayon Brown played 100% of snaps; Monty Rice played 69%. DT Jeffery Simmons has racked up 5 sacks over just the past 2 games, after totaling 7 in his first 32 NFL games.

Playing time shifted back toward LB Pete Werner vs. Tennessee. His 42% share more than doubled his 20% the week before, but still checked in behind Kwon Alexander's 57%. That marked a drop from his climb to 78% in Week 9. Neither is usable right now.

In the 1st game after Marcus Maye's season-ending injury, Jarrod Wilson played 72% of snaps as the Jets' 2nd safety, behind Ashtyn Davis (95%). Sharrod Neasman chimed in for 29%.

The defense lost CB Brandin Echols to a thigh injury that has landed him on IR. LB Jarrad Davis returned from IR for the past 3 games. Here’s his weekly playing time:

He hasn’t delivered much in the way of fantasy-stat production, including just a half-sack. PFF has credited him with 3+ pressures in 6 consecutive outings, though.

Rookie LB Jeremiah Owusu-Koramoah returned for 31% playing time vs. New England after 3 games on IR with a high-ankle sprain. He trailed:

Here were the team’s safety snap shares vs. Jacksonville with Khari Willis out last week:

DB Rudy Ford played 77% of snaps in Sunday's loss to Indy. That followed games of 99% and 63%. He once again served as the team's primary slot CB.

LB Devin Bush played a season-high 96% of snaps against the Lions. Joe Schobert matched that snap share but had also reached that level 2 other times. Schobert played 84%+ each of the previous 2 games as well.

Lions rookie LB Derrick Barnes kept losing playing time in Week 10, down to 17% vs. Steelers. Jalen Reeves-Maybin climbed to 66%. That’s down from 2 straight weeks in the 30s, following 2 in the 40s.

EDGE Dante Fowler returned from 3 games on IR (knee) for a limited role in Week 10 vs. Dallas, playing just 40% of the snaps. James Vaughters, Adetokunbo Ogundeji & Brandon Copeland each played more snaps. Fowler got up to 59% vs. New England on Thursday night and registered his 1st QB hit since Week 3. He has totaled just 4 in 7 appearances this year.

S Brandon Stephens took over for DeShon Elliott vs. the Dolphins in Week 10, playing 67 of 69 defensive snaps. LB Patrick Queen's playing time dipped again. At 52%, he beat Chris Board by 1 snap and trailed Josh Bynes by 15.

As usual, the attractive stat line for LB Elandon Roberts against Baltimore was a lie. He only played 38% of the snaps, well behind both Jerome Baker and Andrew Van Ginkel.