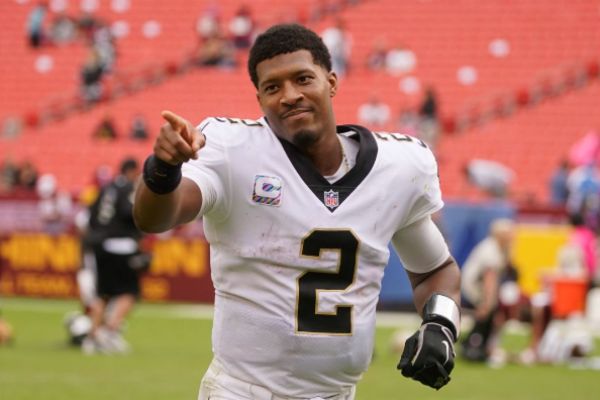 Counting on Winston has a cornerstone for any 2022 fantasy football team wouldn’t be a good idea, but no one is doing that. Even best-ball drafts – which rely only on a player’s best weeks – have Winston going 18th among QBs on FFPC as of this writing and 20th on Underdog. Even at that level, however, he doesn’t look particularly attractive. The knee, plus inconsistent production when he has been healthy, plus an iffy offense incorporating new pass-catchers adds at least as much risk as Winston has upside. The unanswerable question of what we can expect from Michael Thomas in his return only further hurts Winston’s attractiveness for best-ball lineups.

Saints QB Jameis Winston sprained his right foot Monday, according to HC Dennis Allen. ESPN's Mike Triplett reports that Allen called Winston "day to day" and said the team isn't worried about the injury. The QB will sit out of the preseason opener but should be back soon.

Saints HC Dennis Allen said Wednesday that QB Jameis Winston's surgically repaired knee is no longer a concern. "I think we're past the point where we're trying have a maintenance plan on the knee," Allen said. "I think we're in a good spot there. I think it's really just about continuing to get better at the quarterback position." Winston will be under center for the Saints come Week 1, although it remains to be seen if his movement in and out of the pocket will be back to pre-injury levels.

Saints QB Jameis Winston (knee) will participate in team drills as training camp kicks off, HC Dennis Allen said Tuesday. "We feel good about where he's at physically," GM Mickey Loomis added. "We're going to proceed with caution with him, but he's going to be out there practicing." Winston continues to be on track to be ready for the season opener.

"All positive" for Jameis Winston

It's "all positive" for Saints QB Jameis Winston heading to training camp off last October's torn ACL, according to NFL Network's Ian Rapoport. "In the pocket, he should look like Jameis Winston of old," Rapoport adds. "Now maybe early on, bootlegs might look a little different. Maybe a little slower than we're used to as he settles in. But the expectation is that full health is coming." We'll keep an eye on further reports on Winston's health in training camp -- and see if he gets any live reps in preseason games.

Although he has taken part in OTA and minicamp workouts, doctors have not yet cleared Saints QB Jameis Winston for full-team practices. Winston, of course, is coming off the left ACL tear. He appears on track to start training camp on time. We'll see whether he's cleared for all activities by then.