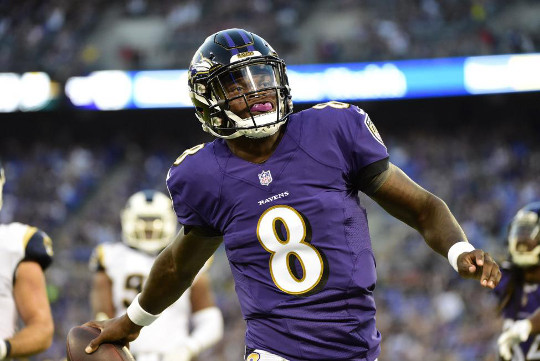 -Jackson was the league MVP in 2019 and finished as the clear-cut QB1.

-With little beyond Marquise Brown and Mark Andrews, the Ravens continued to orchestrate a run-heavy game plan. Jackson tallied 30+ attempts just twice all year (including the postseason).

-Jackson’s wheels remained on display. He became the 1st QB to ever rush for 1,000 yards in 2 separate seasons.

-Stud LT Ronnie Stanley missed most of the season with a broken ankle. Two surgeries were required, but he should be ready for Week 1.

-OC Greg Roman returns for his 3rd season on staff with Jackson. As OC, his offenses have ranked 1st in rush attempts and yards over the past 2 seasons. No surprise with the league’s most athletic QB running the show.

-New passing concepts are likely on the way after the Ravens used a Round 1 pick on WR Rashod Bateman and a Round 4 pick on Tylan Wallace. Bateman looks pro-ready with excellent separation skills and inside/out versatility.

-Baltimore dealt RT Orlando Brown over the offseason. But with additions like RT Alejandro Villaneuva, OG Kevin Zeitler and rookie OG Ben Cleveland, this unit looks like a strength.

After a truly remarkable 2019, Jackson took a predictable step back last fall. The takeaway: Never bet on any QB repeating a 9% TD rate.

Still, there were encouraging signs here. Jackson remained an elite rusher, with usage only scaled back slightly. He also ended 2020 strong with finishes of QB6, QB1, QB5, QB12 and QB9 over the final 5 weeks.

Only in year 4, and now surrounded with his best supporting cast yet, look for Jackson’s passing numbers to rebound. He’s an enticing pick if he slips to late Round 5/Round 6 of 12-team drafts.

Jackson out for COVID issue

Let's just let ESPN's Adam Schefter explain why the Ravens will practice Wednesday without their starting QB: "Lamar Jackson is not practicing today in a COVID-related case the league still is trying to process, per Jamison Hensley and me. Jackson, who tested positive on Thanksgiving, had another test that NFL officials flagged. NFL now going through science, and Ravens awaiting answers." We'll see where this situation goes. It's impossible to tell at the moment whether this is something that will only cost Jackson a day or 2 -- or an issue we should be concerned about. Jackson, of course, had the positive test last November that cost him a game. But we hadn't heard of any related issues since. For now, we're not adjusting Jackson's fantasy outlook.

Ravens QB Lamar Jackson sustained a concussion at the end of the 3rd quarter of Saturday night's loss to the Bills. He struggled before the injury, throwing for just 162 yards, 0 TDs and 1 INT and being limited to 34 yards on 9 carries. This is the 1st documented concussion for Jackson.

Ravens QB Lamar Jackson left in the 4th quarter of Monday night's game against the Browns to be treated for cramps. We'll see if he can make it back onto the field before it's over.

Update: Jackson returned for a 4th-down play and threw a go-ahead TD pass to WR Marquise Brown with less than 2 minutes left.

Ravens QB Lamar Jackson has been activated from the COVID list. He's fully expected to start against the Cowboys on Tuesday night. That's a plus matchup. But the expected absences of TE Mark Andrews and WR Willie Snead leave Jackson as just a mid-range QB1.

Ravens QB Lamar Jackson is expected to be activated from the COVID list and start Tuesday's game against the Cowboys, ESPN's Adam Schefter reports. Jackson carries elevated risk in Week 13 fantasy lineups coming off the illness -- but the matchup is sweet vs. Dallas' 22nd-ranked QB defense.