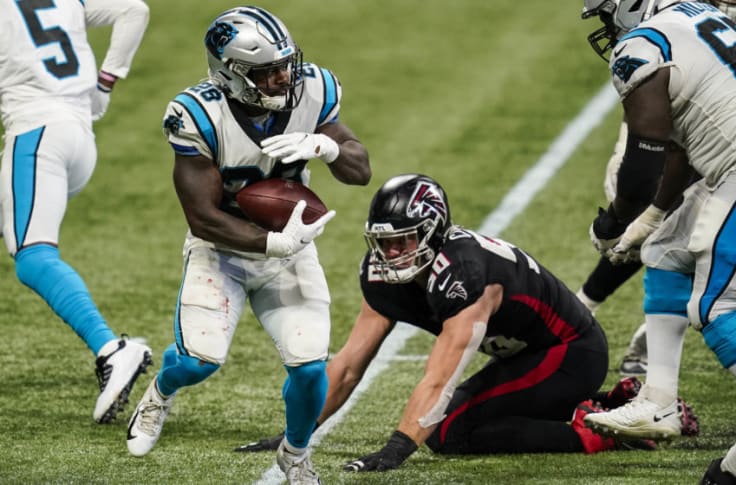 - He wasn’t efficient, though, averaging just 3.9 yards per carry.

- Davis declined down the stretch. After posting 4.2 yards per carry over the first 8 games, he tallied just 3.6 over his final 7. He saw his targets drop by 1.5 per game.

- Overall, Davis showed spurts of excelling as a lead back. He averaged nearly 3 yards after contract per attempt — a solid mark. Davis also ranked 3rd among 47 RBs with 100+ attempts in Pro Football Focus’ Elusive Rating.

- Atlanta signed Davis to a 2-year deal worth $5.5 million in March.

-The Falcons ranked 22nd in PFF’s run-blocking grades last year — 3 spots behind the Panthers. Expect some improvement from this young line.

- Atlanta’s top-3 ball-carriers from 2020 all departed this offseason. Todd Gurley, Brian Hill and Ito Smith leave behind 358 carries (plus 91 targets).

- Atlanta didn't draft a back, instead opting for UDFAs Javian Hawkins and Caleb Huntley. Cordarrelle Patterson arrived as a versatile RB/WR chess piece. But none of the 3 project as major factors.

- Here are the offseason words of new HC Arthur Smith, former OC for the Titans: “The reality is that we’ll get multiple backs in here, and we’ll have the way we trust our schemes and the way we teach the details of it, and we’ll commit to it.”

- In May, RB coach Desmond Kitchings said “the door is wide open” for any RB to take over the backfield. But with unproven guys like Qadree Ollison and Tony Brooks-James (plus the rookies) pushing for snaps, Davis will at least head to camp as the clear favorite for touches.

Davis is a 28-year-old back set to play for his 5th team in 7 seasons. Before tallying 165 carries last year, he compiled 247 totes over his first 5 seasons.

So he doesn’t fit the typical profile of a sure-fire lead back. Yet that’s the role he’s the favorite to land with help from a thin depth chart.

Perhaps stiffer backfield competition arrives in the coming months. But for now, Davis profiles as a volume-based RB2 for a solid Atlanta offense — even without Julio Jones. He does come with elevated risk considering his spotty history. We're generally not looking at him until the 5th round of fantasy drafts.

Back before his team elected not to draft any RBs, new Falcons HC Arthur Smith said he plans a committee approach in the backfield. “We’re not going to have Derrick Henry here,” Smith told the Atlanta Journal-Constitution in April. “So, it’s not like I think we’re going to have Derrick Henry. The reality is that we’ll get multiple backs in here, and we’ll have the way we trust our schemes and the way we teach the details of it, and we’ll commit to it." Mike Davis stands as the clear leader in a group who's next most accomplished rusher is Cordarrelle Patterson. But Patterson will factor in. Atlanta signed Javian Hawkins after the draft. We'll see about Qadree Ollison. And the Falcons could still add pieces. Davis makes for a solid target in current best-ball drafting. Just beware of projecting him too many touches simply because we can't see exactly where else they would go yet.

Has any RB's fantasy outlook improved more than that of Mike Davis through draft weekend? As of this writing (late in Round 6), the Falcons have spent all of their NFL Draft picks and drafted 0 RBs. "It just didn't fall our way," GM Terry Fontenot said of their RB considerations throughout the draft, according to ESPN's Michael Rothstein. That leaves 30-year-old Cordarrelle Patterson as the next most accomplished NFL rusher (167 career carries) behind Davis on the roster, and Atlanta does list Patterson at RB. Qadree Ollison and Tony Brooks-James join them. Fontenot and HC Arthur Smith added that they'll look at undrafted free agents and consider trades, free agents and post-June 1 cuts. So we'll see if the Falcons can add someone better than Davis. He has cleared a big hurdle through draft weekend, though.

The Falcons have agreed to a 2-year, $5.5 million deal with RB Mike Davis, according to NFL Network's Ian Rapoport. It's a sensible signing for an offense with a weak group of RBs. Davis performed solidly in place of Christian McCaffrey with the Panthers last year, including ranking 4th on the team -- and 4th among all NFL RBs -- with 59 receptions. Davis' arrival certainly doesn't preclude Atlanta from making further backfield moves. We'll see whether that includes a pick in the NFL Draft's first 2 days.

Davis not expected to play Week 17

Panthers RB Mike Davis (ankle) isn't expected to play vs. the Saints this weekend, ESPN's David Newton reports. So with Davis and Christian McCaffrey out, Carolina will be down to RBs Rodney Smith and Trenton Cannon. Look for Smith to handle the bulk of the work, but the matchup vs. New Orleans' top-ranked RB defense leaves him as an uninspiring fantasy play. WR Curtis Samuel should also continue to play a significant role in the ground game after carrying 7 times for 52 yards last week.

Panthers RB Mike Davis injured a finger in the 3rd quarter of Sunday's game against the Bucs and is officially questionable to return. Stay tuned for an update.