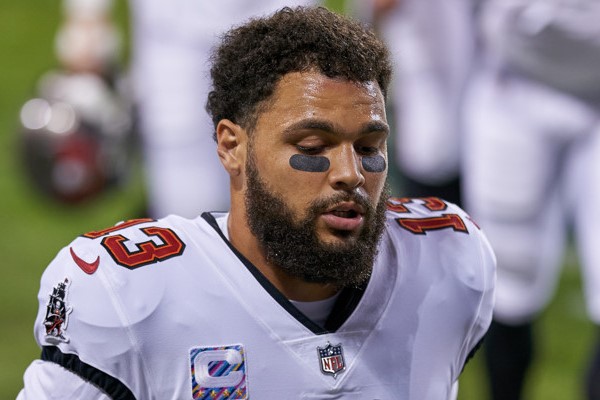 -Evans left some meat on the bone: A 10.3% drop rate marked the 2nd highest total of his career.

-Still, getting Tom Brady in the lineup helped produce a 62.3% catch rate — his 2nd best tally. That’s despite heavy usage as a downfield threat (14.1 average depth of target).

-Antonio Brown joined the team at midseason. His arrival didn’t crush Evans’ fantasy stock, though. He ranked as the WR19 from Weeks 1-8 (without AB); the WR11 from Weeks 9-17 (with AB).

Evans has been among the most productive WRs league-wide since his rookie season (2014). Over the past 7 seasons, he ranks 9th among WRs in catches, 3rd in yards and 3rd in TDs. He’s missed just 7 games over that stretch.

Such a loaded supporting cast does put a lid on his 2021 upside. But if the Bucs remain extremely pass heavy, fantasy owners can live with a fringe WR1 ceiling. He’s currently coming off the board around WR16.

Buccaneers WR Mike Evans (knee) is active for tonight's game against Washington. We know he'll be somewhere short of 100%, though. Just how far short remains to be seen during the game. Evans makes for a risky fantasy play.

NFL Network's Mike Garafolo reports that Buccaneers WR Mike Evans plans to "try everything he possibly can" to play in Saturday night's game against Washington. It's good that he sounds like he'll be able to play through the Week 17 knee injury, but it also sounds like Evans will be a risky fantasy play this weekend. We'll see about his official game status Saturday evening.

Bucs WR Mike Evans (knee) is listed as questionable for Saturday night's Wild Card game vs. Washington. He returned to a limited practice and will be a game-time decision, HC Bruce Arians said. We'll get Evans' game status by 7 pm ET on Saturday.

Bucs WR Mike Evans (knee) remained sidelined for Wednesday's practice. His injury reportedly isn't serious, and he could play in this weekend's game vs. Washington without practicing. But his availabilty for that one remains uncertain. We'll get another update on his status tomorrow.

NFL Network's Ian Rapoport hears that there's "optimism" Bucs WR Mike Evans (knee) will be able to play vs. Washington on Saturday night. He was officially listed as "did not practice" on Tuesday but was reportedly out on the field for the walkthrough. We'll continue to keep a close eye on his status over the next few days.