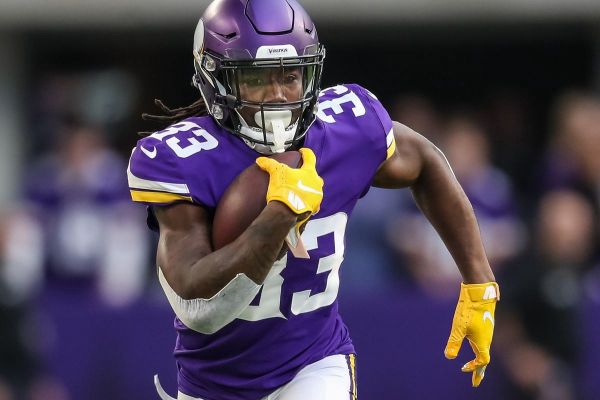 Cook enters the fall in a great spot for workhorse volume.

That’s nothing new for the FSU product, who’s hit 18+ touches 30 times over the past 3 seasons.

There's reason to be optimistic about his new staff, too. HC Kevin O’Connell projects as an upgrade to the unit both in offensive creativity and offensive pace.

Cook simply comes with elevated risk given his history of shoulder and lower-body injuries. The veteran hasn’t played more than 14 games in any season.

Currently projected to play 14 games, Cook’s profile screams high-risk, high-reward. As of this writing, his ADP is sitting at 1.08.

Vikings HC Kevin O'Connell called RB Dalvin Cook "day to day" with the shoulder injury that knocked him out of Sunday's contest, according to ESPN's Adam Schefter. That follows in line with initial reports on Cook's status. It sounds like Minnesota expects Cook to be available for Week 4, but we'll have to track his status through the practice week.

Cook to play with brace Week 4?

Pro Football Talk hears that the "current expectation" is for Vikings RB Dalvin Cook to wear a brace on his injured left shoulder and play vs. the Saints in London next week. We wouldn't go locking Cook into Week 4 fantasy lineups just yet but will track Cook's status throughout this coming week. RB Alexander Mattison should be owned in all fantasy leagues in case Cook misses further time.

Cook out with left shoulder injury

Vikings RB Dalvin Cook injured his left shoulder in the 3rd quarter of Sunday's game vs. the Lions and was quickly ruled out. Cook, of course, has a long history of shoulder injuries. We'll update his status when we know more. RB Alexander Mattison will take over as Minnesota's workhorse.

RB Dalvin Cook amassed just 17 yards on 6 carries as the Vikings got whipped by the Eagles on Monday night. Cook was matched in rushing yards by WR Jalen Reagor's lone carry and beaten by QB Kirk Cousins' 2 rushes for 20 yards. Cook added 4-19 receiving on 6 targets, on a night where Minnesota could get nothing going. RB Alexander Mattison contributed 8 yards on 2 carries and 3 catches for 6 yards on 5 targets.

Cook remained effective in 2021, averaging 4.5+ yards per carry for the 5th straight season. But he missed another 3 games with injury, turned 27 in August and still has legal issues hanging over his head.