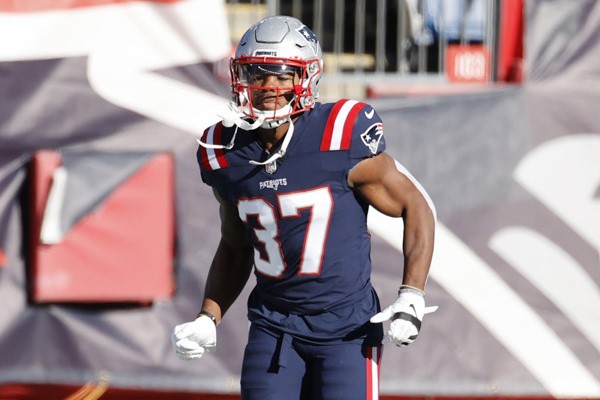 Week 5
Harris got beat up in this one. First it was a chest injury in the 3rd quarter. He returned from that one -- but then was knocked out for good by a rib injury in the 4th.

Before those injuries, Harris coughed up a fumble in the 2nd quarter and didn’t play on New England’s next 3 series. So it was a rough outing.

The good news is that Harris is considered “day to day” with those injuries. And RB Rhamondre Stevenson didn’t exactly take advantage of his opportunity in this one, mustering just 23 yards on 11 carries.

We’ll monitor Harris’ practice participation this week and see where this backfield goes from here. We’ll also see if New England’s offensive line gets healthier after missing 4 starters in Week 5.

The Patriots host the Cowboys in Week 6 and then get a great matchup vs. the Jets in Week 7.
Week 4
It was a forgettable night for Damien Harris and the Patriots backfield. The Patriots were never able to get anything going on the ground and were having success through the air. Even in a torrential downpour, the Patriots threw 42 passes and only ran the ball 8 times. The team was held to -1 yards on the ground against a dominant Tampa front seven. Harris was held to -4 yards on only 4 carries, with a long gain of 1 yard. Harris did add 2 catches (on 2 targets) for 30 yards. Harris will be eager to move forward to a more appealing matchup against Houston this weekend. We didn’t get to see much from the run game or how the Patriots will navigate the backfield without James White. Harris' touches have dropped every week since he saw 25 touches in Week 1. Since then, he has seen only 31 touches over the last 3 games. We have him ranked at RB23 this week against the Texans. The Patriots next three opponents include @HST, DAL, NYJ.
Week 3
A bad matchup and terrible game flow resulted in a very slow day for Harris. He combined for 11 yards on 8 touches. What was even more concerning was after the injury to James White, the Patriots opted to go with Brandon Bolden and J.J. Taylor instead of expanding Harris’ role in the pass game. Most weeks Harris will be fine as the Patriots boast one of the best offensive lines in football. That being said, when facing top run defenses, Harris might be a player to fade due to his lack of pass game involvement.
Heading into Week 4 fantasy managers might need to make that decision to sit Harris once again as they face the Buccaneers. The Bucs have allowed the 3rd fewest points to RBs and are 7th in Football Outsiders DVOA run D. This matchup could make Harris a fade for Week 4.
Week 2
Harris rushed 16 times for 62 yards and 1 TD in the Patriots' Week 2 win over the Jets.
Coming off a costly fumble in Week 1 against the Dolphins, Harris dominated the backfield with 16 carries compared to just 5 for James White and 2 for J.J. Taylor.
Harris was mostly bottled up throughout the game but had an electric 26-yard TD run where he broke several tackles on his way to the end zone.
With Harris expected to get 15-20 carries a game, he should remain a RB2 going forward with RB1 upside in matchups where the Patriots are projected to win handily.
Harris gets a tough matchup in Week 3 against the Saints.
Week 1
Harris’ Week 1 might be remembered for his late-game fumble. Just remember the positives, too. He saw 20 carries, or 76.6% of New England’s team total. Strong. He also drew 3 targets and ran 10 routes. It might not sound like much — but Harris averaged only 4.6 routes per game in 2020. While Harris ran well, New England’s O-line performed well up front. They also benefited from an early exit from massive Miami DL Raekwon Davis (knee). Look for the Pats to go back to Harris in Week 2. He’s clearly their best runner — and note that Rhamondre Stevenson also lost a fumble (and blew a blitz pick-up). Game flow should be in the running game’s favor this week against the banged up Jets.

Harris showed flashes of being able to handle the Pats’ lead back role in 2020. He just never developed into a consistent fantasy producer due to a limited receiving role, an offense lacking explosive plays and 6 missed games.

Our money is on Harris entering September as the early-down ball-carrier. But following the addition of rookie Rhomondre Stevenson, Harris will need to perform well to retain that role all season.

Patriots RB Damien Harris (ribs) is active for today’s game vs. the Cowboys. He got in limited practices on Thursday and Friday and was listed as questionable on the final injury report. Between the rib injury and last week’s goal-line fumble, Harris is a risky fantasy play today. Rookie RB Rhamondre Stevenson could play an expanded role. RB J.J. Taylor is a healthy scratch again today.

"There is optimism" Patriots RB Damien Harris (ribs) plays vs. the Cowboys today, per NFL Network's Ian Rapoport. "Not certain yet, but some good feelings," Rapoport adds. Harris got in 2 limited practices this week after being knocked out of last Sunday's win over the Texans. Between the injury and last week's fumble, Harris looks like a risky fantasy option today.

Patriots RB Damien Harris (ribs) is listed as questionable for this weekend's game vs. the Cowboys. He got in limited practices on Thursday and Friday. Besides the rib injury, Harris also lost a goal-line fumble last week. It all has his Week 6 role a bit uncertain. If Harris doesn't play on Sunday, rookie Rhamondre Stevenson would be the favorite for lead-back duties.

Harris back at practice Thursday

Patriots RB Damien Harris (ribs) returned to a limited practice on Thursday. It gives him a shot to play vs. the Cowboys this weekend. Check back tomorrow for another update on Harris.

Patriots RB Damien Harris (ribs) did not practice on Wednesday. He never re-entered last week's game after hurting his ribs and is seemingly in danger of missing Sunday's game vs. the Cowboys. That'd likely put rookie RB Rhamondre Stevenson in a lead ball-carrying role. We'll get another update on Harris tomorrow.