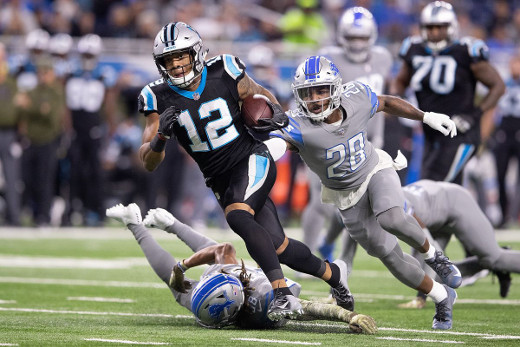 Last week broke Moore's streak of 3 straight top-12 fantasy finishes. He should bounce back on Sunday vs. a Minnesota defense that's given up productive outings to Ja'Marr Chase, DeAndre Hopkins and D.K. Metcalf through 5 weeks.

Week 4
Even more of Moore at Dallas. He had game highs of 8 catches, 12 targets, 113 receiving yards and 2 TD catches. Moore also carried once on an end-around for a 6-yard gain. He is tied for 2nd in the NFL in receptions, tied for 1st in 1st downs, 4th in yardage, tied for 9th in TD catches. He is well on his way to a 3rd straight 1,000-yard season.
This appears to be a breakout season for Moore, whose next TD catch will equal his season high of 4. It’s likely he can do that Sunday against Philadelphia, which has given up 9 passing TDs in 4 games. Moore has established a rapport with new Panthers QB Sam Darnold, and he is 1 Carolina player whose fantasy numbers are helped by having RB Christian McCaffrey out of the lineup.
Week 3
If there were any remaining questions about the pecking order in Carolina’s WR corps, this game put those to bed.

Moore dominated, hauling in 8 of 12 targets for 126 yards. He accounted for 35% of the team’s targets, 35% of the catches and 41% of the receiving yards. Moore was targeted at all levels of the field and looked awesome as a route runner and after the catch. His outing could have been even bigger had QB Sam Darnold not just missed him on a potential 51-yard TD.

Through 3 weeks, Moore has accumulated 31 targets, 22 catches and 285 yards. Those marks rank 6th, 5th and 7th among WRs. Moore has scored just once but sits 9th at his position in PPR points and 13th in non-PPR.

Moore might pick up even more short-range work in the short term with RB Christian McCaffrey expected to miss the next few games with his hamstring injury.

He’s a must-start and has a chance to finish as a WR1 this season.
Week 2
Moore continued to look like the Panthers alpha WR in Week 2. Racking up 8 catches for 79 yards and a score, Moore has now out-targeted Robby Anderson by 10 over the first 2 games. He scored on a short-range slant pattern that saw him shake free of the DB. The 24-year-old now ranks as the PPR WR15. Week 3 turns up a sweet matchup with the Texans, followed by another favorable draw at Dallas.
Week 1
Moore looked like Carolina’s #1 WR in the opener. There were several plays dialed up to get the ball in his hands, including a jet sweep and a WR screen. The highlight of Moore’s day was a twisting, toe-tapper down the left sideline for 27 yards.

He finished with 6 catches on 8 targets for 80 yards. All 3 of those marks trailed only RB Christian McCaffrey (9 targets, 9 catches, 89 yards). Moore played 81% of Carolina’s offensive snaps and ran a route on 92% of pass plays.

The Panthers have a deep group of weapons, so Moore might be left out a few times this season. But he should be locked into fantasy lineups as a rock-solid WR2.

2021 brings about some change. The Panthers will field a new starting QB (Sam Darnold) and a new WR in 3-WR sets (rookie Terrace Marshall). We’d be surprised if Marshall is an instant upgrade on the departed Curtis Samuel, so perhaps there’s a higher ceiling for Moore this fall.

Ultimately, though, the Maryland product retains a similar WR2 outlook. Currently, he’s fairly priced at a late Round 4 ADP.

Panthers WRs D.J. Moore and Curtis Samuel are active for tonight's game against the Packers. Moore was activated from the COVID list this week and should be ready for his usual role. Samuel's hamstring tightened up on him in Thursday's practice, so he comes with elevated risk in fantasy lineups.

Moore back for Week 15

Panthers WR D.J. Moore was activated from the COVID list this week and is set to return for Saturday night’s game against the Packers. He racked up 27 targets over his last 3 games and is safe to get back into Week 15 fantasy lineups.

Moore not expected to play Week 14

Panthers WR D.J. Moore remains on the COVID list as of Friday afternoon and isn't expected to play vs. the Broncos on Sunday, ESPN's David Newton reports. Moore has averaged 7.4 targets per game this season, so his absence frees up a bunch of opportunity for WRs Robby Anderson and Curtis Samuel.

NFL Network's Ian Rapoport reports that Panthers WR D.J. Moore has COVID. We don't know exactly when Moore tested positive, but consider him a long shot to play against the Broncos this weekend. WR Curtis Samuel, meanwhile, landed on the COVID list as a "close contact" but hasn't tested positive as of now. If he can avoid a positive test, he should be cleared to face Denver.

Panthers WR D.J. Moore has been placed on the COVID list. It's unclear if he tested positive for the virus or was just a close contact of someone who did. Moore is also recovering from his Week 12 ankle injury, so his status for Sunday's game against the Broncos is murky at best.