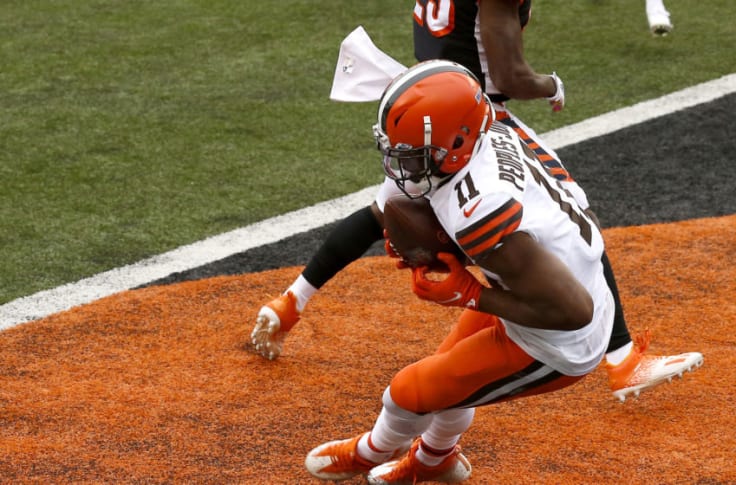 Peoples-Jones garnered just 2 targets among Baker Mayfield’s 31 pass attempts in the 1st game since Jarvis Landry’s knee sprain. But both looks produced athletic sideline connections -- for gains of 18 and 21.

The Browns’ low-volume passing plan lowers both the floor and the ceiling for DPJ and makes him tough to like in common fantasy formats. There is some low-level upside in potential shootout conditions at Minnesota in Week 4.

DPJ having a nice camp so far

According to Zac Jackson of The Athletic, Browns WR Donovan Peoples-Jones is "absolutely lighting up training camp." The 2nd-year wideout is reportedly impressing with his size, speed and hands, and showing a good connection with QB Baker Mayfield. This unpadded portion of workouts is ideal for WRs to stand out, of course, but DPJ could be winning the #3 job. He's competing primarily with Rashard Higgins, who returned on a 1-year deal in free agency. We certainly liked the athletic upside on Peoples-Jones, who arrived as a 6th-round pick despite a stellar Combine workout. He's at least worth hanging onto in dynasty leagues where possible. Another injury to Odell Beckham or Jarvis Landry this year would present intriguing opportunity.

Browns WR Donovan Peoples-Jones (concussion) is active for tonight's game against the Steelers.

Browns WR Donovan Peoples-Jones (concussion) is listed as questionable for Sunday night's game vs. the Steelers. He was able to practice on Friday after missing the previous 2 days but still needs clearance to play this weekend. Cleveland is already expected to be without WR KhaDarel Hodge (COVID) vs. Pittsburgh.

The Browns selected Michigan WR Donovan Peoples-Jones in the 6th round of the 2020 NFL Draft. DPJ was a major disappointment for Big Blue. The 5-star recruit totaled just 103 catches, 1,327 yards and 14 TDs across 3 years on campus. In his defense, he dealt with crappy QB play. Michigan ranked 111th, 80th and 50th in passing yards per game the last 3 seasons. Peoples-Jones turned heads with his Combine performance: a 4.48-second 40 time and 44.5-inch vertical at 6’2 and 212 pounds. He earned a 99th percentile SPARQ score. And you see flashes of that athleticism on tape. Peoples-Jones waited a long time to hear his name called, though, and will have to battle for #3 WR duties in Cleveland behind Odell Beckham and Jarvis Landry. He’s just a deep dynasty stash.