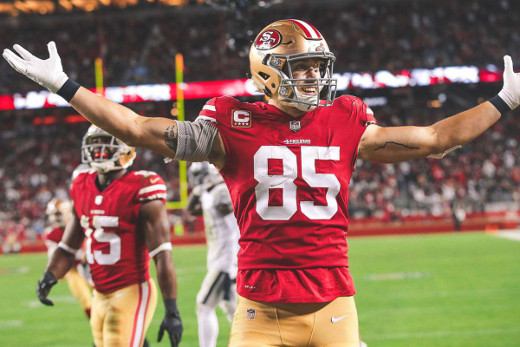 Week 14
There’s not much we need to say about a guy who has racked up 27 targets, 22 receptions, 332 yards and 3 TDs over the past 2 weeks. Kittle has dominated target share over those 2 games, at 38%. So there’s room for him to even cede some work back to Deebo Samuel – when the 49ers remember he plays WR – and still rank among the top TEs.

Kittle has found the end zone in 5 of the past 6 games. Enjoy him.
Week 13
Even though he already has a game with 100 yards and a TD on the season, it took Deebo Samuel being sidelined for Kittle to have the eruption game that fantasy managers were waiting for. He was an absolute beast after the catch, as that was how most of his 181 yards were gained. On his long TD, he caught a ball near the sideline and showed incredible body control to keep from stepping out of bounds while maintaining enough speed to outrun the defenders. He also saw an excellent 12 of the 30 passes Jimmy Garoppolo threw for a massive 40% target share.

Fantasy managers will have to take the good with the bad. As one of the most lethal blockers in the NFL, Kittle will have games that he’s needed to block at the expense of his receiving production. However, he recently came off a stretch in which he scored in 3 straight contests. Although his next 3 matchups, in theory, aren’t great, (Bengals, Falcons and Titans, who are solid vs.TEs), he could go off at any time, so benching him makes little sense.
Week 12
When the 49ers get their running game going, they’ll occasionally have those games where they don’t need to throw the ball much. This was one of them. As a result, Kittle saw just 2 targets, and his only catch went for 13 yards. From an NFL standpoint, he had a dominant game, as he was blocking for the run game and eliminating Minnesota defenders. On one specific play he sought out CB Patrick Peterson at the 2nd level and destroyed him while opening a huge chasm for the RB. Unfortunately, his great play didn’t translate into fantasy points this week.

Although Kittle has been held to fewer than 34 yards twice in 8 games played, those floor games are always lurking. And they have nothing to do with talent -- they have to do with how much the 49ers’ run game is dominating in a given week. He’s been targeted at least 7 times in half of his games, so he usually has a solid floor. But with Deebo Samuel and Brandon Aiyuk also playing well, the massive games of years past don’t hit often. On the year, his biggest game is 6-101-1, and that may be his true ceiling at this point.
Week 11
Kittle has hit the ground running since his return to the lineup back in Week 9 scoring a TD in 3 straight games. This includes a solid Week 11 performance vs. the Jaguars where Kittle secured all 4 targets for 34 yards and a TD. Even though the production has been there for Kittle he has yet to return to a full time role in this offense. Prior to going down in Week 4, Kittle played nearly 100% of the snaps. Since his return to the lineup, Kittle has only averaged 77% of the snaps. The fact that Kittle has been producing on limited snaps could be an indication that he’s setup to be a league winner down the stretch.
This week Kittle has the toughest matchup among all the skill position players vs. the Minnesota Vikings. The Vikings this season have allowed the 5th fewest fantasy points to the TE position. This includes holding down notable TEs Mark Andrews (5-44), T.J. Hockenson (2-22) and Dalton Schultz (2-11). Kittle is an auto-start, but he could be a fade in DFS.
Week 9
Kittle caught 6 of 8 targets for 101 yards and 1 TD in the 49ers' Week 9 loss to the Cardinals.
Kittle was reported to be on a "pitch count" heading into this game, but he looked healthy and explosive as he had his 11th career 100-yard game.
Kittle had several contested catches and broke tackles after the catch as usual but had a horrible fumble in the 1st quarter as he was hurdling a couple of defenders.
Kittle will be an easy top 5 TE rest of season assuming he stays healthy.
Week 4
Despite playing the game with a calf injury, Kittle played 92% of the snaps while seeing a season-high 11 targets. Unfortunately, he tied his season low with 4 receptions and his 2nd lowest yardage total of the season. It was mostly a number of missed connections between Kittle and both Jimmy Garoppolo and Trey Lance, but it also seemed as if the calf injury may have had a role in him not getting his typical separation from defenders.

Kittle is arguably the most talented TE in the league, but his elite blocking skills frequently keep him from being a massive factor in the passing game, especially since the team has capable WRs they can go to. Kittle should still have the occasional eruption game, but it’s also likely that he’ll have many middling performances, which may keep him from earning his lofty draft-day investment. Regardless, his weekly floor at least helps fantasy managers from avoiding the near-zero performances that many TEs produce.
Week 3
Kittle has been a safety net for his QBs since he entered the league, and Sunday night was no different. Kittle saw 9 targets against Green Bay for a 22.5% target share.

Garoppolo looked for Kittle throughout the game on screens, intermediate routes, deep balls and even a carry he took for 9 yards. Kittle finished the game with 7 catches for 92 yards, including a 39-yard catch-and-run.

Kittle gets a nice matchup against a Seattle secondary that just surrendered 70 yards and a TD to Tyler Conklin.

We have San Francisco TEs with the 3rd easiest strength of schedule for the rest of season.
Week 2
You already got the bad news on Kittle when you checked your Week 2 fantasy scores. So let’s start with something positive: A week after running routes on just 57.1% of San Francisco dropbacks, Kittle led the team at 88.2% vs. Philly.

Of course, he garnered just 4 targets among Jimmy Garoppolo’s 30 attempts, catching them all for a meager 17 yards. Blame an embarrassing average target depth of minus-2 yards.

That number stood at 5.6 in Week 1. And Kittle’s lowest full-season ADOT so far has been 5.9. So we’ll hope this was a blip. Jimmy Garoppolo’s overall ADOT was also down vs. Week 1, coming up shortest in the league for Week 2.

If you have Kittle, don’t quit on him just yet. Look for more routes to become more targets and for screen passes to make up a much lower percentage of his opportunities.

Next comes a matchup with Green Bay, which has allowed 3 TE scores through 2 games.
Week 1
With the 49ers rolling out to a big lead and controlling this game until the Lions made a wild 4th quarter comeback, Kittle was targeted just 5 times as Jimmy Garoppolo was only needed to throw the ball 25 times. Although his 20% target share was solid, and he was easily the 2nd most-targeted 49er, it was Deebo Samuel who was on fire, leading to the WR dominating with 12 targets at the expense of Kittle.

As always, it’s not a matter of talent with Kittle, it’s both a matter of opportunity and elite blocking ability that keep him from performing as well as Travis Kelce each week. In games like this week’s, he was having a blast blocking and annihilating Detroit defenders, and there will be other week’s where Samuel and Brandon Aiyuk are featured. Of course there will be huge weeks for Kittle, and he’ll be a top-end fantasy TE, but there’ll be peaks and valleys.

Kittle has been excellent for the past 3 seasons, leading all TEs in yards per route run and scoring as a top 3 fantasy TE each year. The durability concerns are a bit overblown. Prior to last year, he’d missed just 3 games over his first 3 NFL seasons.

Volume is a slight concern in 2021. Kittle will be vying for looks with WRs Brandon Aiyuk and Deebo Samuel in what figures to be a run-leaning offense, especially when rookie QB Trey Lance takes over. That’s enough to knock Kittle behind Travis Kelce and Darren Waller in our rankings. But he’s the clear #3 TE across scoring formats.

49ers TE George Kittle (knee) is not listed on the final injury report. He got Wednesday off but put in a limited practice on Thursday and a full practice on Friday. Keep Kittle glued into fantasy lineups for this weekend’s game vs. the Falcons.

Kittle back at practice Thursday

49ers TE George Kittle (knee) returned to a limited practice on Thursday. It's confirmation that he's on track to play vs. the Falcons this weekend, despite sitting out on Wednesday with what HC Kyle Shanahan called "knee soreness." We'll update Kittle's status again on Friday afternoon.

Kittle out Wednesday with "knee soreness"

49ers TE George Kittle was held out of Wednesday's practice with what HC Kyle Shanahan called "knee soreness." Shanahan didn't sound concerned, according to insider Kate Rooney, adding that he's looking to get Kittle a little extra rest with a Thursday night game coming in Week 16. Fantasy owners can keep Kittle penciled into starting lineups for now. We'll keep an eye on him over the next few days.

49ers TE George Kittle (calf) is active for today’s game vs. the Cardinals. He’s been out since Week 4. ESPN’s Adam Schefter reported this morning that Kittle is slated to play “roughly half the game.” We’re expecting him to be out there for most passing plays, though, and would feel comfortable getting Kittle into Week 9 fantasy lineups.

Kittle on a "pitch count"

49ers TE George Kittle (calf) is expected to play today but will be on a "pitch count," according to ESPN's Adam Schefter. The plan is for Kittle to play "roughly half the game," Schefter adds. For perspective, Kittle played between 92-100% of San Francisco's offensive snaps in the first 4 games. Still, we'd expect him to be on the field for most, if not all, of the obvious passing situations. Consider him a lower-end TE1 with upside for Week 9.