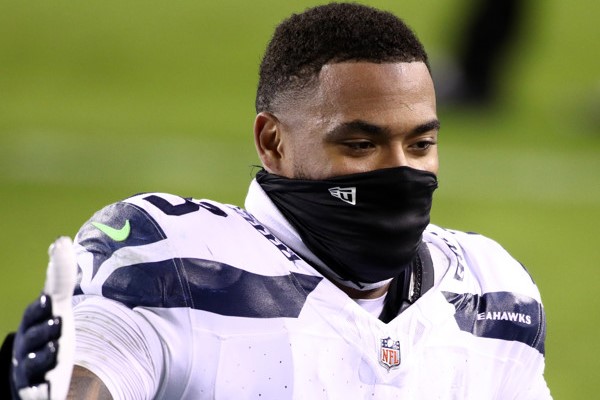 Adams has yet to register a pressure, but he has logged 13 pass-rushing opportunities through 2 games. So they're coming. This week's opponent, Minnesota, leads the league in tackles supplied to DBs through 2 weeks.

The Seahawks took Adams' abnormally large pass-rushing role with the Jets and expanded it after trading for him. He went from rushing the passer on 16.1% of his passing-down snaps in 2019 to 23.3% last year, his 1st in Seattle. Despite missing 4 games -- and a good chunk of a 5th -- Adams still logged 21 more total pass rushes than the next safety (104 to Malcolm Jenkins' 83, according to Pro Football Focus).

That factor alone stands as the key differentiator for Adams atop the position. We see no reason to expect that role to change in 2021, and Seattle's desire to use him as a key pass rusher will keep Adams in or near the box throughout games.

The only lingering question entering the season was Adams' contract, but the 2 sides finally answered that with an August extension.

Draft Adams with confidence if the timing makes sense in your draft.

Adams gets his extension

The Seahawks have agreed to a 4-year extension with S Jamal Adams. The deal holds a maximum value of $72 million, according to NFL Network's Mike Garafolo, with $38 million fully guaranteed. Adams has been in camp but sitting out practices. This deal should return him to full action. We haven't moved Adams down our DB rankings at all.

Seahawks S Jamal Adams has been sitting out training-camp practices amid a stalemate in negotiations on his contract extension. But eternal optimist HC Pete Carroll doesn't expect that to carry over into the regular season. “Oh, I’m not even thinking about that at all,” Carroll told The Seattle Times this week. “I don’t know. I can’t even imagine that.” We'll see about Adams as the regular season draws closer.

Adams reports for start of camp

Seahawks S Jamal Adams has reported for the beginning of training camp. Whether he would do so was in question as the star safety and the team remain locked in negotiations on a long-term contract. But IDP fantasy players need not worry about Adams' status.

Seahawks S Jamal Adams played through a torn labrum in his left shoulder in Saturday night's win over the Rams and will now need offseason surgery, according to ESPN's Adam Schefter. Adams reportedly also might require surgery on his right shoulder and plans to have surgery on his left hand. We'll see whether any of these issues delay his start to 2021, but we'd bet on the star safety being ready.

Adams is back; Griffin out

Seahawks S Jamal Adams put in a full practice Friday and carries no injury designation into Sunday's game at Buffalo. That makes him ready to re-insert into IDP lineups. CB Shaq Griffin (hamstring) will miss his 2nd straight game. That keeps Tre Flowers in the starting lineup.