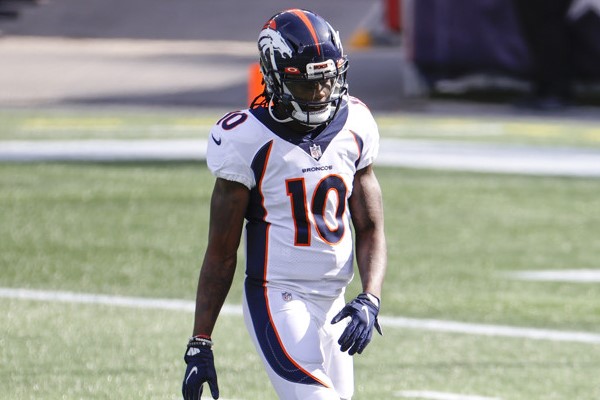 Jeudy had a tough go last year. He suffered a significant high-ankle sprain in the opener that sidelined him for about a month and a half. Then he dealt with shaky QB play after returning.

QB play shouldn’t be an issue in 2022 after the Broncos swung a big trade for Russell Wilson. And while the target battle between Jeudy and Courtland Sutton might be tight, Tim Patrick's ACL tear opens the door for both guys to out-perform ADP.

A big-time talent coming out of Alabama and still only 23 years old, Jeudy is a guy we want to bet on. Consider him a high-upside WR2 in fantasy drafts.

Broncos WR Jerry Jeudy (ankle) remained sidelined on Thursday. He's looking like a long shot to play vs. the Panthers this weekend.

Broncos WR Jerry Jeudy missed practice on Wednesday. He’s still nursing the ankle injury that kept him out of Week 11.

Crappy QB play and a high-ankle sprain conspired to derail Jeudy's 2nd season, but the jury's out on him longer term. We like the talent, but Denver extended both Courtland Sutton and Tim Patrick during the 2021 season. Russell Wilson, of course, gives Jeudy a massive QB upgrade in the short term.