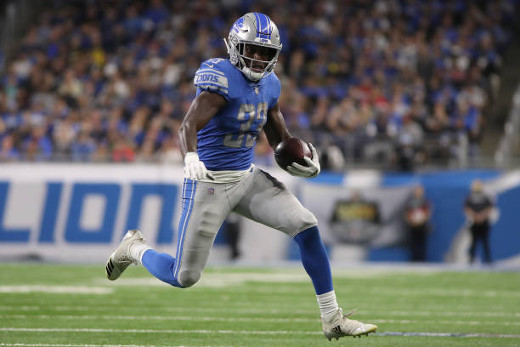 Johnson finds decent opportunity in Philadelphia. Miles Sanders is coming off a meh 2nd season overall, and a new coaching staff gives everyone a fresh slate. Behind Sanders, Boston Scott is the top returning option, with Jordan Howard and 5th-round rookie Kenneth Gainwell also in the mix. Johnson will need a big rebound from a disheartening 2020, though. And it’s not encouraging that Detroit jettisoned him from a backfield that basically sports only D’Andre Swift and offseason import Jamaal Williams. Johnson is likely don’t being truly fantasy relevant.

The Eagles on Friday signed RB Kerryon Johnson. He slipped to just 3.3 carries and 1.2 receptions per game last season, with D'Andre Swift in the mix -- despite playing in all 16 games for the 1st time in his 3 years. Johnson joins a Philly backfield with Miles Sanders as the leader, 5th-round pick Kenneth Gainwell arriving as a receiving factor and Jordan Howard returning. We'll see exactly how Johnson fits in this summer.

The Lions are waiving RB Kerryon Johnson, according to NFL Network's Ian Rapoport. This move doesn't come as a surprise after Detroit signed Jamaal Williams in free agency. We'd bet on Johnson finding a new team before long, with Atlanta the most obvious candidate. Johnson averaged 4.3 yards per carry and 8.3 yards per catch over 3 seasons in Detroit but averaged just 10.1 touches per game. He lost 14 games to injuries over his first 2 seasons before playing in every 2020 game -- and seeing his rushing workload crater (3.3 rushes per contest). We'll see where Johnson lands for 2021.

With RB D'Andre Swift out for Sunday's game against the Panthers, Lions RBs coach Kyle Caskey says Adrian Peterson will "lead it off" but that Kerryon Johnson "will fill [Swift's role] as much as possible." That makes Johnson sounds like the better fantasy player here -- at least in PPR formats. Of course, we'll all just be guessing at the workload split heading into the game. Fortunately, Carolina brings the league's 4th-best RB scoring matchup, so it's a spot capable of supporting fantasy value in both Detroit RBs.

Lions RB Kerryon Johnson is still wearing a brace on his knee and has been getting "maintenance" days off early in training camp. He missed 8 games last season with a right knee injury that required surgery -- although he did return for the final 2 games. He also missed 6 games as a rookie with a left knee injury. Durability remains a concern here. And if Johnson isn't at 100%, it'll only be tougher to hold off rookie RB D'Andre Swift.

Lions RBs Kerryon Johnson (knee) and Bo Scarbrough (ribs) are active for today’s game against the Broncos. NFL Network’s Ian Rapoport gave us a convoluted report on this backfield this morning that didn’t help much. Try to avoid the situation — but if you’re forced to invest, Johnson is your best bet.