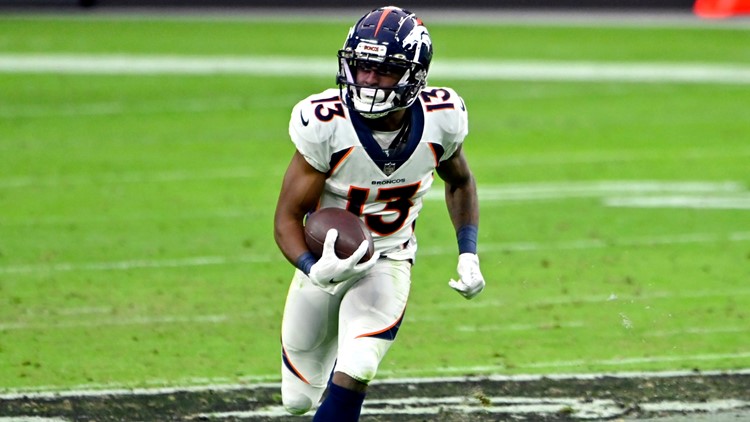 Hamler’s first order of business is recovering from last September’s torn ACL and dislocated hip. After that, he still has plenty to prove after 16 mostly underwhelming games to open his NFL career.

Hamler gets a big QB upgrade this season with the arrival of Russell Wilson. But he’ll likely be 4th on Denver’s depth chart behind Jerry Jeudy, Courtland Sutton and Tim Patrick. Hamler would need an injury to at least 1 of those guys to have a shot at reliable fantasy value.

Nick Kosmider of The Athletic considers K.J. Hamler the Denver WR that best fits Russell Wilson’s skill set. Hamler suffered a torn left ACL and a dislocated hip in Week 3 of last season. Following a smooth rehab, the speedster could fill a key role alongside one of the league’s best deep ball passers. Kosmider notes that the 3rd-year pro posted a massive 20.1 air yards per target in a limited 2021 sample. Given the crowded WR depth chart, though, Hamler’s best off as a late-round WR7/8 in best ball leagues.

Broncos WR K.J. Hamler revealed Wednesday that he dislocated his hip on the same play on which he tore his left ACL last September. He needed surgery on the hip, in addition to the knee. Hamler has resumed running and said he's ahead of schedule in his rehab. “The fact that I’m out there, when I’m not supposed to be out there… it tells you how hard I work. I’m working my butt off," he said. We'll see how Hamler looks when Denver opens training camp in July. He'll likely slide in as the Broncos' #4 WR behind Jerry Jeudy, Courtland Sutton and Tim Patrick.

Hamler "well ahead of schedule" in rehab

Broncos WR K.J. Hamler is “well ahead of schedule" in his recovery from last September's torn left ACL, GM George Paton said. Hamler was able to get on the field and run some routes with new QB Russell Wilson in March. "The fact that I saw him running routes last month at Russell’s, I mean, I know he’s doing well, I know his surgery went well, but when I saw him out there (running routes), very impressive," Paton added. It sounds like Hamler is on track to be ready for the start of training camp. His challenge at that point will be climbing a depth chart that's topped by Jerry Jeudy, Courtland Sutton and Tim Patrick.

Hamler not likely for spring workouts

Broncos GM George Paton told The Denver Post that WR KJ Hamler is a "long shot" to participate in spring OTAs. Hamler suffered an ACL tear back in Week 3, so it's not surprising that he isn't trending for early workouts. We'll see about his status for training camp and beyond. In addition to the knee, though, Hamler must compete with a crowded offense for targets. It's tough to envision him becoming much of a 2022 factor in redraft fantasy football leagues.

Broncos WR K.J. Hamler suffered a torn ACL in Sunday's win over the Jets and will miss the rest of the season, insider Mike Klis reports. The timing of the injury gives Hamler a good chance to be ready for the start of the 2022 campaign, but durability is a significant concern here after Hamler struggled staying healthy at Penn State and as a rookie. With WR Jerry Jeudy still expected to miss a few more weeks, Denver is down to WRs Courtland Sutton, Tim Patrick, Diontae Spencer and Kendall Hinton for now.