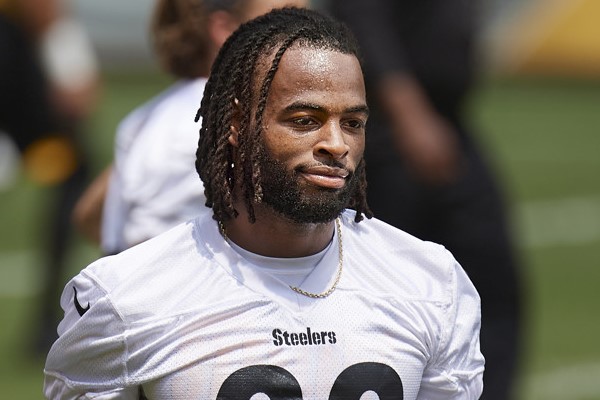 Week 11
Harris was ineffective most of the night against the Chargers on Sunday Night Football. The Steelers offensive line was unable to get much push up front against the worst rushing defense in the league. A 1-yard TD in the 4th quarter and heavy passing game usage saved the night for his fantasy managers. Harris did receive elite-level usage and was by far the most involved RB for the Steelers on the night. Harris left the game with an injury late in the game but was able to return just a few minutes later. He finished with 12 carries for 39 yards and 1 TD on the ground. He added 5 catches (on 6 targets) for 20 yards. Harris has now reached the end zone in 6 of the last 7 games for the Steelers and has received 25+ touches in 5 of their last 6 games. Harris is ranked as our RB3 this week against Cincinnati. The Bengals defense has now surrendered 37+ PPR points in 2 of their last 3 games. The next three games on the schedule for the Steelers are @CIN, BAL, and @MIN.

Week 10
Harris rushed 26 times for 105 yards in the Steelers' Week 10 tie with the Lions, adding 4 receptions for 28 yards on 4 targets.
Harris once again had monster usage against a poor Lions defense but was unable to break through with a big game. He had a TD called back by holding.
Harris is an every-week RB1 with elite volume, but his upside is capped on a team that lacks offensive firepower with a dusty QB and bad offensive line.
Harris has a great matchup in Week 11 against the run-funnel Chargers and will be a borderline top 5 RB play.
Week 9
The Chicago defense came into this game with a plan to take away everything Pittsburgh wanted to do near the line of scrimmage, which included trying to stop Harris as a runner. As a result, the Bears held him to less than 3 yards per carry. But a 1st quarter TD run and another heavy volume game helped him to post solid fantasy numbers. For the 2nd game in a row, he was targeted just 3 times, and he struggled to find space on any of those opportunities.

There’s no reason to expect any type of dropoff from the Steelers’ 1st round draft pick, as they’ve shown that they will give him all the work he can handle. He’s handled between 23 and 26 carries in the 3 games leading into this week. He’s had a couple big target games this season, but over his previous 4 games, his targets have fallen between 2 and 6, which is still good, though not at the levels they were at times. He should continue to turn his chances into production, as he’s posted at least 120 total yards in 4 of his last 5 games.
Week 6
The saving grace for Najee Harris owners has been his elite receiving game production. This season Harris leads all RBs in targets (46) and its not close. Behind Harris only D’Andre Swift has more than 32 targets on the year. This has helped mask how poorly Harris has been on the ground this season. Harris’ 3.8 YPC puts him tied at 38th on the year. Week 6 was no different as Harris caught 6 passes for 46 yards and a score and averaged 3.4 YPC. Volume is once again king for fantasy owners, so it hasn’t impacted fantasy teams this season as Harris sits as the RB3 in fantasy. Looking forward, Harris’s run game schedule should get better after the Browns game in Week 8. This could help compensate for the eventual dip in pass game production keeping Harris as an RB1 ROS.
Week 5
Harris enjoyed the best rushing day of his young career Sunday against the Broncos. His 23 rushing attempts beat his previous high by 7 -- both coming in Pittsburgh’s 2 victories so far. Harris took those for 122 yards and a short-range TD.

The rookie didn’t fare as well as usual in the passing game, catching just 2 of 5 targets. But even that represented a strong 20% target share, with Ben Roethlisberger attempting only 25 throws on the day.

Harris continues to dominate the Pittsburgh backfield and belongs in weekly fantasy lineups for just that reason. Week 6 might bring the best matchup yet. Seattle ranks just 25th in overall defensive DVOA and will begin a game without Russell Wilson for the 1st time since the QB entered the league.
Week 4
While the production hasn’t panned out the way many expected, Harris continues to be a compelling option, especially in leagues with any sort of PPR scoring. He gained 62 yards and a TD on his 15 carries vs. Green Bay. He also caught 6 of his 7 targets for 29 yards. Harris has seen 5 or more targets over the last 3 weeks, seeing 31 total over that span.

Going forward, the rushing yardage will be underwhelming on a week to week basis, but Harris can provide a safe floor with his pass-catching ability. The weeks where he finds the end zone, he will provide a strong fantasy performance.
Week 3
For the 3rd game in a row, Harris was unable to surpass 45 rushing yards. But with Ben Roethlisberger just looking to get rid of the ball as quickly as he could in a game they needed to push the ball downfield to give them a chance to win, Harris was targeted an amazing 19 times. His run after the catch ability allowed him to eclipse 100 yards. Certainly, his receiving prowess gave fantasy managers all the points they could have hoped for, but he was unable to reach 3 yards per carry against a fairly weak opponent despite being given a solid 14 carries.

Those who selected Harris on draft day did so with the promise of great volume, and that panned out this week, when he had 28 touches with excellent production. However, in the 2 games prior, he averaged 16 touches and failed to find much room to run behind a terrible run-blocking OL, and he’s failed to reach 3 yards per carry in all but 1 game. He should continue to produce, given a 95% or higher snap rate in each game while being heavily used as a receiver, giving him one of the best scoring floors in fantasy.
Week 2
For the 2nd week in a row, Harris played at least 95% of the snaps. But despite the Steelers talking in the preseason about being a run-first team, they are still heavily slanted toward the pass. As a result, Harris had just 10 rushing attempts, and behind a weak OL, he again failed to reach 4 yards per carry. However, he was very productive in the passing game, catching all 5 of his targets. And on his red zone catch, he broke a tackle and dove into the end zone for his first NFL TD.

Despite elite playing time, the workload has yet to catch up as he had just 15 touches this week. Assuming that Pittsburgh continues to throw the ball as often as possible, those drafting Harris based on a gargantuan workload may be disappointed. And despite an early schedule that’s been unimposing, the fact he’s running for just over 3 yards per carry is disappointing. Unless his efficiency or volume changes, he may be more of a RB2 than the RB1 that many were expecting on draft day.
Week 1
Harris played all 55 of Pittsburgh’s offensive plays. That’s the workhorse role we wanted — and expected. The negative is that the new-look O-line created very little push up front — another preseason expectation. So Harris wound up with only 45 yards on 16 carries, plus 1 catch (and 1 drop) on 3 targets. "I think we all knew as a team that we're still trying to get our identity," Harris told Steelers.com. "We knew we were going to start off kind of slow. That's not what we were hoping for. That's just part of building, but at the same token, Buffalo is a really good team.” We agree with Harris that Buffalo might end up being one of his tougher matchups all season. Week 2, though, brings about an easier on-paper matchup with the Raiders. Harris will remain a volume-based RB1 for that one.

In college, Harris checked boxes for tape, production, and size. Now in the pros, he’s poised to see high-end run volume immediately. That’ll help override any efficiency troubles due to a transitioning O-line.

Now, if Ben Roethlisberger can stay on the field, Harris will have a clear shot at RB1 value. He’s just not coming at a discount with a mid- Round 2 ADP.

Steelers RB Najee Harris left in the 2nd half of Sunday night's game against the Steelers after taking a hard elbow to the head. We'll see whether he's diagnosed with a concussion.

Steelers RB Najee Harris (foot) is not listed on the final Week 10 injury report. He was limited in Thursday’s practice but a full-go on Friday. Harris should be ready for his usual workhorse role in Sunday’s dream matchup.

Steelers RB Najee Harris was added to the injury report with a foot and limited in practice on Thursday. We don't have any other info right now. We'll see if Harris practices on Friday and how he's listed on the final injury report.

Steelers GM Kevin Colbert believes rookie RB Najee Harris is ready for a 3-down role right out of the gate. "Him coming in as a senior out of college, he has more experience than some of the other underclassmen, so I think that will help him transition," Colbert said. "He's coming out a traditional NFL-type offense that should help him transition." Harris has the experience and talent to capture a huge role this season. And there isn't a legitimate threat for work behind him on the depth chart. We only have 4 RBs projected for more opportunities (carries + targets) than Harris.

Steelers QB Ben Roethlisberger has been impressed by how rookie RB Najee Harris has settled into the offense. "He doesn't seem lost. It's not too big for him. His head's not spinning," Roethlisberger said. "The most exciting part is once he gets it and it clicks and he goes full speed, it's going to be something to see." Harris has already made a few highlight-reel grabs in practice and is set up for a big workload right out of the gate. There's RB1 upside here.